Australians may soon have to get a third dose to be considered fully vaccinated, as an expert taskforce weighs the evidence on the Omicron variant’s ability to evade vaccines and state governments push to bring forward the timing of booster shots.

Premiers will urge Prime Minister Scott Morrison to agree to speed up the schedule for booster shots when national cabinet holds an emergency meeting on Tuesday to discuss public health measures to curb rapidly increasing case numbers in NSW and Victoria. 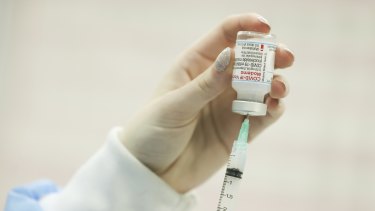 State premiers will push Prime Minister Scott Morrison to accelerate the booster schedule at a meeting on Tuesday.Credit:Alex Ellinghausen

In advice to national cabinet seen by The Sydney Morning Herald and The Age, the Australian Health Protection Principal Committee warned that Omicron could “strain health system capacity” even if the variant caused milder illness, recommending “minimal to moderate restrictions” and increased efforts to boost vaccine coverage.

“Masks should be mandated in all indoor settings including retail, hospitality when not eating or drinking, and entertainment facilities,” the advice sent to the Prime Minister and state and territory leaders by Chief Medical Officer Paul Kelly said.

“Implementation of mask-wearing measures should occur prior to Omicron case escalation to have maximum benefit.”

NSW Health Minister Brad Hazzard and his Victorian counterpart Martin Foley have written to federal Health Minister Greg Hunt calling for ATAGI [the Australian Technical Advisory Group on Immunisation] to make “specific determinations” for both states to have a fast-tracked booster program ahead of “a very challenging holiday and summer period”.

Mr Hazzard told this masthead this would be critical in “beating the new strain.”

“I worry that ATAGI are holding back on giving what is logical advice for earlier boosters because of concerns that pharmacies and GPs will be shutting down for Christmas,” he said.

“There needs to be careful explanation that while there may be wait time in some places, people should still be eligible from the four-month mark.”

The federal government is pushing back on the states to keep their vaccination hubs running throughout the booster program.

ATAGI last week advised that boosters be brought forward from six to five months – rendering more than 4.1 million Australians eligible for a booster by the end of the year, an increase of 2.4 million people. Just under one-third of those eligible have had their booster shot.

The AHPPC noted that the expert body “will continue to monitor the evidence and update its advice accordingly”.

The expert body said in its advice that it understood the Australian Technical Advisory Group on Immunisation “will consider whether a three-dose rather than a two-dose course meets requirements for full vaccination status, noting that there will be significant considerations for implementation if this definition changes”.

It called for a public awareness campaign “to reflect the importance and urgency of receiving booster doses once eligible” and warned that GPs, who are pushing the federal government to restore incentive payments to those giving vaccines, would be essential to the rollout.

“Continued strong partnership between the Commonwealth, states and territories, GPs, pharmacies, the Aboriginal community controlled sector and other providers will be required in the coming weeks to ensure a smooth and rapid rollout of boosters,” the document said.

“Clear messaging is needed to maximise uptake of booster doses, including if ATAGI recommends accelerating shortening the duration between the second dose of vaccine and booster dose.”

Some GPs and pharmacists have been turning away people seeking booster shots, either because they do not have any vaccine doses or patients are requesting them earlier than five months, even though ATAGI has advised that people who will be due for a booster by January 3 may have one now.

Prime Minister Scott Morrison said in a letter to state and territory leaders that “there are sufficient doses to ensure that everyone in Australia who is eligible for a booster dose can receive it over the holiday period”.

A spokeswoman for federal health minister Greg Hunt said the federal government “will continue to follow the medical advice” from its independent medical advisor, ATAGI, which was reviewing its position weekly and that states, GPs and pharmacies were holding more than five million doses.

A move to redefine fully vaccinated to mean three doses would follow the United States, Israel and Singapore.

Melbourne University epidemiologist Tony Blakley said it was “bordering on unethical” to deny early booster shots to people aged over 60 in Victoria and NSW who had two AstraZeneca doses, as preliminary research showed it gave low protection against the new variant.

University of South Australia epidemiologist Adrian Esterman said ATAGI was “being way too conservative … and it’s going to cause a lot of unwarranted infections.”

“If you’ve had two doses of AstraZeneca – and that’s the majority of older people in Australia – you have almost zero protection against being infected by Omicron,” he said.

Public health efforts to test, trace, isolate and quarantine COVID-19 cases would be of limited use to reducing transmission with higher case numbers, the AHPPC advice said.

“This may lead to a requirement in the future to rely more heavily on other levers, including indoor
mask wearing and strategic use of rapid antigen testing, to control transmission and impacts, particularly in high-risk settings.”

“Where operationally feasible, a minimum seven-day quarantine period should remain for vaccinated close contacts of Omicron to slow transmission.”

The AHPPC recommended removing travel bans on countries with high numbers of Omicron cases now that the variant had spread across the globe, with post-arrival testing and possible quarantine measures to slow the importation of new cases.

The advice said that the combination of Omicron’s high transmissibility and vaccine escape “may lead to rapidly escalating transmission in the context of high vaccine coverage and a significant caseload.”

Recommended measures that could be “tailored to local conditions” include “continued use of vaccine certificates” – meaning unvaccinated NSW and Victorian residents would have freedoms removed – and recommending people work from home “if able to”.

Density restrictions could be brought back for venues, the advice said, noting this would impact on small businesses.

It said health authorities should encourage gatherings in well-ventilated and outdoor areas.