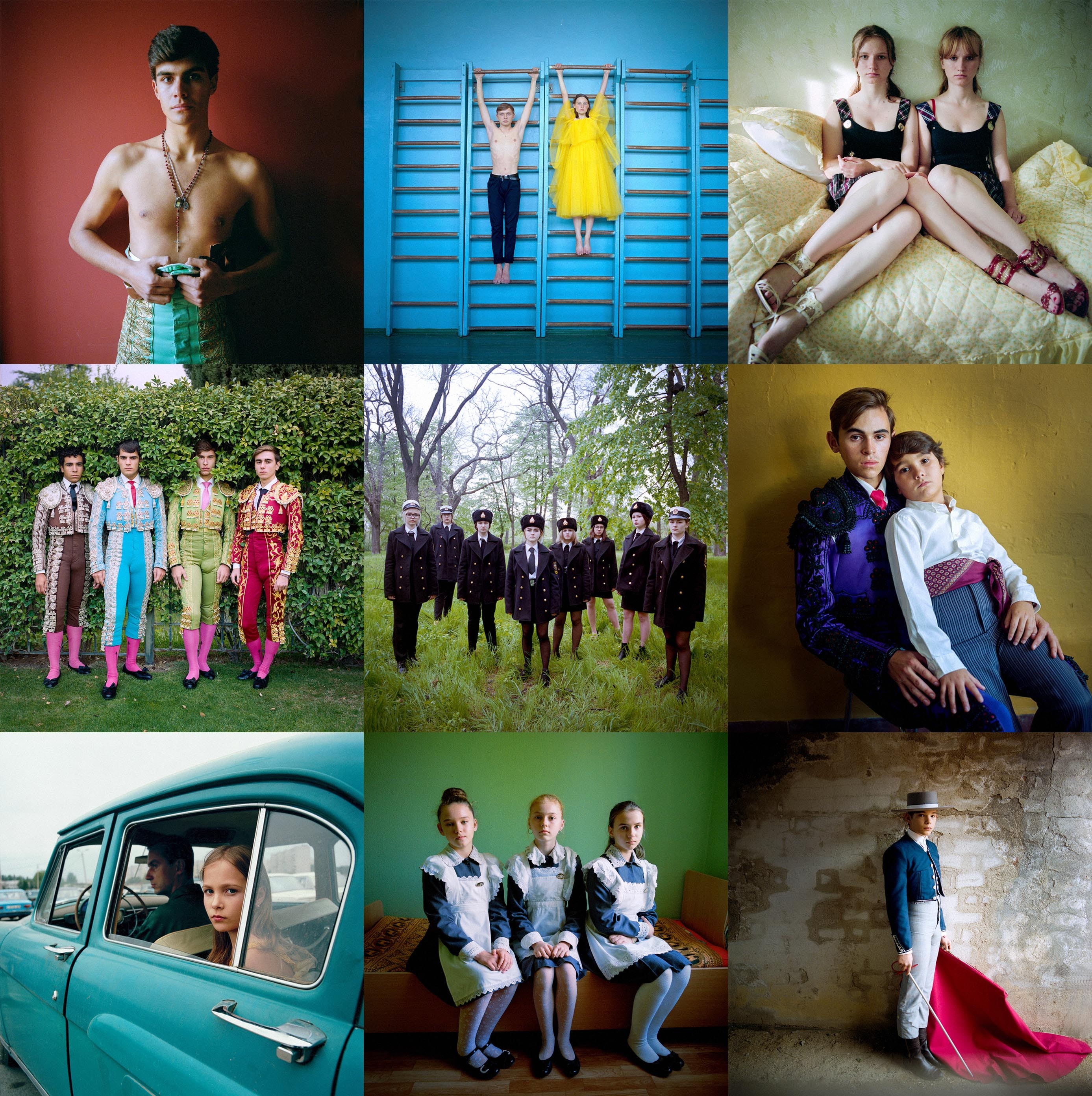 Welcome to Ways of Seeing, a series in which two creatives sit down to discuss the nuances of their work, trade industry secrets, and fill each other in on their latest projects. The only catch? One of them is on staff at W magazine. In this week’s edition, visuals editor Michael Beckert chats with the photographer Michal Chelbin, an internationally acclaimed artist known for her portraits of Ukrainian youth. Her new book, How to Dance the Waltz, was released this past April.

How did you get into photography?

I started photography when I was 14, in high school. I wasn’t a great student, and I was also very shy and quiet. Looking back, I was really confused, and hadn’t been able to find myself anywhere. I had an opportunity to go to this art school, and there was a photography department, so I enrolled in it. The camera gave me a lot of power, and a lot of strength—it allowed me to direct people and find a voice. When you grow up in Israel, after high school, it’s mandatory for everyone to enroll in the army, so I was a photographer—that was the job I was assigned. I was just eighteen years old, and did that until I was twenty; I think that’s where my interest in uniforms come from.

What did photograph in the army?

I was supposed to do documentary photography of all the soldiers, but I really wanted to direct the subjects. So I found myself directing everyone to march in a specific way, or to come in and out of the buildings. I didn’t like the army very much, and if I was a teenager again, I wouldn’t enroll—not that I had a choice. It was a very emotionally challenging time. It was a bit of a shock to me, but the photography helped me.

Young Matadors in the bush, Spain 2018. Photograph by Michal Chelbin, from her new book How to Dance The Waltz (2021).

How did you come to photograph youth culture, for which you’ve become well-known?

There was always something about this age group that really fascinated me. It’s an age full of expectation and contradiction; I’ve always been drawn to the experience of being young. My oldest daughter is 13, so I’m starting to see what she’s going through.

Have you already started photographing your daughter a lot during this age?

Oh yes, she’s on my Instagram. She sort of looks like one of the models I’ve photographed from Ukraine.

One of your previous bodies of work was about prisoners—who they are, and why they’ve been sentenced to jail. It seems like the connection between that body of work and this new book is the idea of being bound to an identity. The prisoners are bound quite literally by prison or their crimes, and the youth in How to Dance the Waltz are bound by the uniforms they wear. How did you find your subjects for this book?

Some of the subjects are from a military boarding school in Ukraine, and most of that work was taken over the course of five years, from 2015 to 2020. The second body of work depicts various boys in Matador schools in Spain; we actually cast some of the matadors from Instagram. There’s a third body of work in the book about teenagers going to prom in Kiev. This book is all about uniforms—the performance of wearing them and fitting into the identities they connote. They’re all kids, but they’re acting as adults, which is difficult for them. When I was photographing the prisoners, for example, the hardest prisoners to photograph were the teenagers. They were so sad.

I can’t tell if you’re critical of the uniforms or if you’re just showing them to the viewer.

I’m trying to show the contradiction, or the riddle of this youth. When you look at the matadors, for example, there is something very colorful and inviting about what they wear, but it’s also difficult to see that they’re just very fragile kids. I guess I am being critical.

Young Cadets, Ukraine 2018. Photograph by Michal Chelbin, from her new book How to Dance The Waltz (2021).

What’s your favorite picture in your latest book?

I love this photograph of a girl in the schools in Ukraine. She’s in a little office, and the girl is posing, but the nurse is busy in the foreground writing something. The nurse isn’t posed at all, she’s just focused on her work, but the girl is posing. It’s this great juxtaposition of a youth and an adult. It reminds me of a Johannes Vermeer painting.

What do you look for in a subject?

That they trust me! I want to make work with people who want to be photographed, and who trust the vision.

How do you gain the trust of your subjects?

Do your subjects ever get emotional when you’re shooting them?

Several times it has happened, but not always. It’s a very therapeutic process for everyone involved. It’s just me, the camera, the subject, and natural light. The subject takes off all their masks, and there’s a moment of magic that I can’t describe. It’s very quiet. I don’t fully understand it either.

The foreword of the book, written by Joseph Akel, compares your work to Larry Clark’s—another famous youth photographer who shot American teens and their many forms of rebellion. Do you think young people everywhere are prone to rebellion, even if they’re being squeezed into a uniform of some kind?

I don’t think it matters where you’re growing up, you want to rebel no matter what.

Did you have any moments of rebellion in your youth?

I had my moments, but I wasn’t very dramatic. It was through the photography that I rebelled, really. I did have two older sisters who were quite rebellious. As they grew up, they became a lot more proper, I guess you’d call it. Now I’m the one who seems a bit more rebellious, having gone into the arts. My father didn’t really see how photography could be its own path; I think he thought it was a bad habit. Even now, he doesn’t realize that it’s become something quite significant for my life.

Many of our readers are recent art school graduates. What advice would you give to new graduates?

I’d tell new graduates to follow their hearts, and just do it. Don’t put off your work. Don’t think about it too much. Follow your intuition. Sometimes we think, Oh, it’ll be too difficult—even me. Sometimes I see someone on the street I want to photograph and I get nervous to approach them. But I just remind myself, what’s the worst thing that can happen? They’ll just say no. There are so many pictures I missed out on because I was afraid to ask someone to sit for a picture. If you’re making a body of work that’s good, it’ll find its audience.

What are you most proud of in your career so far?

I have three kids, and I have four books. They’re so special to me, like children. I think the most important body of work I’ve done is the work about the prisoners, but I’m really proud of all my books.

Tags: Artist, Chelbin, He, Michal, talks
You may also like
Celebrities News