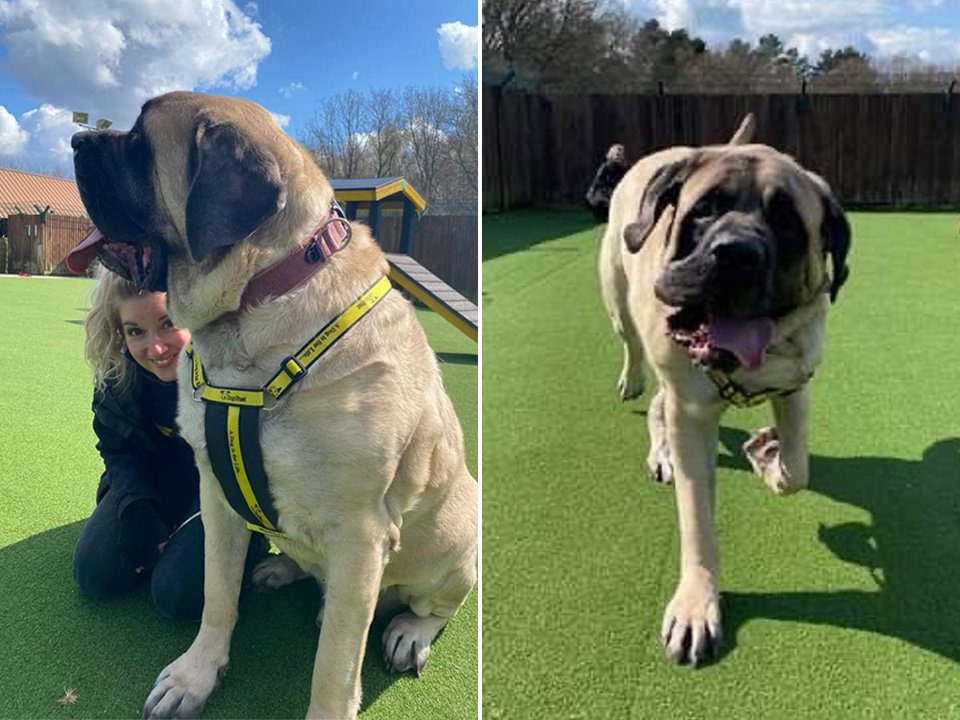 This is Galahad – the Old English mastiff that a Dog’s Trust shelter is calling the ‘biggest dog we’ve ever had’.

Galahad weighs in at an even 100kg (roughly 15 stone, 7lbs), which is a similar weight to that of an average newborn elephant.

Harriet Blaskett, rehoming centre manager at Dogs Trust Canterbury, said: ‘Galahad is easily the biggest dog we’ve ever had here at Canterbury, and he’s looking for a big-hearted owner to match.

‘He’s got no idea of his size at all and just loves human company, so he needs an owner able to cope with the demands of such a big dog.’

Don’t let his stature fool you – Mastiffs are known for being gentle, loving and easygoing.

As for four-year-old Galahad, he loves having a good sniff around and chilling on the sofa, but he shows no mercy to flowerbeds and walks right through hedges.

Harriet said: ‘Galahad has had a lot of upheaval in his life so far, so can be a little unsure when he first goes somewhere, but once he’s comfortable he enjoys exploring his environment, sniffing (and knocking things over) as he goes.

‘His amazing foster carers say he loves nothing more than lounging on a sofa of his own – he sleeps on a two-seater – and plodding around the garden.

‘He has little respect for flower beds or hedges and chooses to walk through them, loves chewing toys, and spraying them with saliva with a flick of his head.’

Old English Mastiffs are recognised by Guinness World Records as being the heaviest dog breed.

In fact, an Old English Mastiff even bigger than Galahad named Zorba set the record for heaviest dog in 1987, weighing 142 kg (22 stone, 3lbs).

Tags: Animals, Cute, Dogs
You may also like
Celebrities News