The Andrews government has brokered a deal to secure an extra vote for its pandemic bill, with just days left to introduce the framework after it stalled in the upper house.

Rod Barton from the Transport Matters Party has pushed the government to make significant concessions, with new amendments that will provide more oversight and appeal provisions. 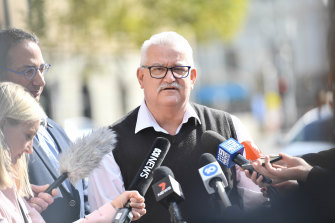 The proposed Public Health and Wellbeing Amendment (Pandemic Management) Bill 2021 will be brought before the upper house on Tuesday now a majority appears to have been secured.

Under the deal with Mr Barton — which the government hopes will soften public turmoil that has led to daily protests on the steps of the Victorian Parliament — a new independent panel would be established to review detention orders during a pandemic.

Also under the six amendments is the establishment of a joint parliamentary committee, chaired by a non-government MP. Health directions could also be reversed by a majority of both the Legislative Assembly and Legislative Council.

The Victorian Ombudsman would also be able to receive complaints for investigation, and all aggravated offences would be removed from the draft legislation.

Labor has been negotiating with crossbench MPs previously cut out of consultations to ensure its bill can pass before the existing state of emergency powers expire on December 15, with just three sitting days of Parliament left to do so.

Under existing laws, the chief health officer makes binding health orders under a state of emergency, but this power would be transferred to the premier and health minister during a pandemic under the draft legislation. 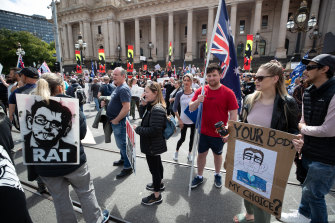 The state government hopes the changes will soften public turmoil that has led to daily protests on the steps of the Victorian Parliament.Credit:Jason South

Without either framework, the government would have no mechanism to enforce health orders such as quarantine, mask and vaccination mandates.

Labor believed it had a working majority in the upper house, with the support of Fiona Patten from the Reason Party, Animal Justice MP Andy Meddick and Greens leader Samantha Ratnam, but this was scuttled by the re-emergence of ousted Labor MP Adem Somyurek who vowed to tip the vote against his former party.