The Australian Medical Association WA has blasted the state government and health officials for ignoring lessons from other states about the transmission of COVID-19 after it was revealed case 903 may have come about through airborne spread.

Up until last week, staff at WA’s quarantine hotels were not required to wear masks at all times and the Four Points security guard was sitting in a chair three metres from the room of the guest he is suspected of catching the more infectious UK strain of the virus from. 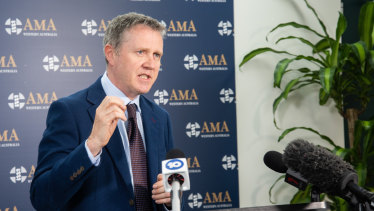 Speaking to reporters on Wednesday afternoon while a CO2 measuring device analysed the ventilation of the media room, AMA WA president Andrew Miller said the world had known about airborne transmission since last year.

“The other states get it, New Zealand gets it, we’ve seen the same situation in Queensland where the entire floor was thought to be contaminated by the airborne spread of this virus.

“I think the general public, the Premier and I would think the Health Department stuffed up by not requiring that people who are going to be dealing on a daily basis as part of their job with COVID patients that they weren’t even given basic PPE.”

The AMA wants the state government to distribute N95-grade masks and better-quality PPE to all security guards to reduce the chance of airborne infections.

“Wearing a mask for 12 hours straight sitting in a chair is an uncomfortable situation. It’s very sweaty, it’s hot and the more you have it on the more irritated you get and the more chances you have of touching your mask, so there’s downsides to wearing masks,” Dr Armstrong said earlier on Wednesday.

“I think at the time the policy was put in place it was the right thing to do.”

“I heard incredible things today about how we should not wear a mask because we might touch them or we might fiddle with them and they’re uncomfortable. Just forget all of that. That’s all wrong,” he said.

“We’ve told the entire community that they have to wear masks, that is a valid public health direction. Go with that, don’t listen to the stuff about how masks are uncomfortable to wear.”

“If you have a worker who has to wear heavy PPE to protect themselves for 12 hours the solution to that is to give them a break and have more workers,” he said.

“The solution is not take away the PPE, let the worker catch coronavirus go and do what a 20-year-old does, which is socialise with the community and shut us all down for a week. That’s not logical.”

Dr Miller’s comments expose a widening rift between the state’s peak doctors’ association and the government over the hotel quarantine system.

He said the government continued to ignore the AMA’s advice and suggested there should be staff changes among the state’s top health bureaucrats.

“We’re quite clearly on the record over this and If they don’t start listening to us they’re going to have to change some people, absolutely,” Dr Miller said.