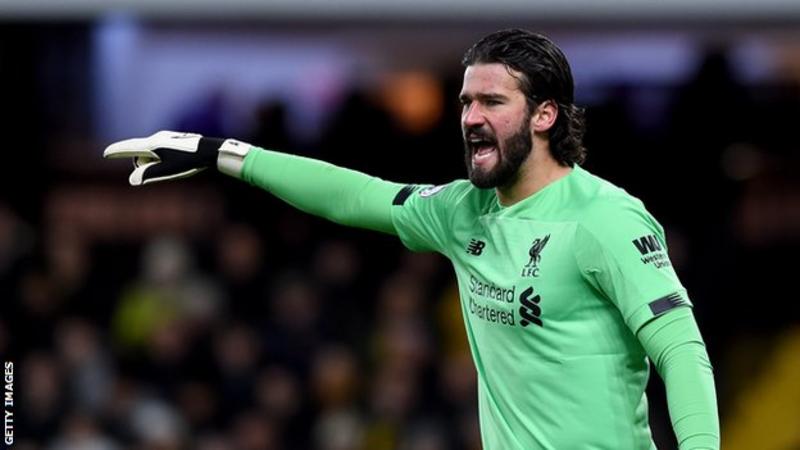 Liverpool goalkeeper Alisson has been ruled out of their Champions League last-16 second leg against Atletico Madrid with a hip injury.

Alisson will also miss Saturday’s home Premier League game against Bournemouth and is a doubt for the Merseyside derby at Everton on 16 March.

Liverpool host Atletico on Wednesday, trailing 1-0 from the first leg.

“He is not available for tomorrow and then the next week,” manager Jurgen Klopp said of the 27-year-old.

“We have to judge the situation. I would say after the international break, 100%. Whatever we can get before that we will see.”

Alisson, who has played 28 times for Liverpool this season, picked up the injury in training before Tuesday’s 2-0 FA Cup fifth-round defeat at Chelsea.

The Brazil international – the world’s most expensive goalkeeper when he joined Liverpool from Roma in 2018 in a deal worth up to £66.8m – also missed nine weeks of the campaign with a calf injury sustained in their opening league match against Norwich City in August.

“He [Alisson] had a little incident in training before the Chelsea game,” Klopp said.

“We all thought it was nothing and it was clear he would not play anyway. The plan was that he would be on the bench.

“[There was a] scan the next day and they found something, so now he is out.”

Tags: 'Liverpool, Alisson:, keeper, m, to
You may also like
Celebrities News