Dell’s latest Alienware gaming monitor (model AW5520QF) is an incredibly niche device. At 55 inches, the display is as big as most televisions, and the OLED panel ensures the best image reproduction available. But with a $7000 price tag, it is hard to justify the monitor’s power gaming features over an OLED television.

The monitor’s design is as practical as it is aesthetically pleasing. Too often gaming products are designed with a confused mishmash of masculine signifiers – such as giant angular devices covered in red skulls or camouflage – that look like something a young Elon Musk might have sketched in his textbooks in high school. 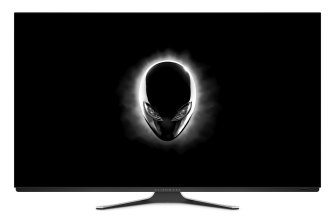 Thankfully, Alienware has ditched this aesthetic for a panel that looks more suited to an Aperture Science testing laboratory. The front panel has very little bezel surrounding the display, and floats atop a small but sturdy stand. A curved white back plate hides the various ports and cables connecting to a PC, while a small glowing Alienware logo and strip of coloured LEDs brightens your room as you play. This is a monitor that demands to be shown off, not shoved against a wall, and I’m sure part of the design is intended to appeal to Twitch streamers.

Dell’s press material shows the monitor being used on a desk, with a player standing right in front of the massive screen. While this makes for amazing, immersive gameplay, I couldn’t use it this closely for more than a few minutes at a time. Even the few minutes it took to set up Windows 10 and install Steam left me with a sore neck. Instead, I preferred playing across the room, with a wireless keyboard, mouse and gamepad.

The 4K display is stunning, with a wide colour gamut and beautiful, inky blacks. Playing in bright daylight proved a little disappointing, as the monitor is not the brightest OLED I’ve used, but when playing movies and games in a dark room, with just the ambient light from the back LED, the image was incredible. The monitor supports Nvidia’s G Sync and Radeon’s FreeSync, to limit image tearing regardless of the graphics card your PC or console uses. The OLED panel supports 120Hz refresh rate at 4K, something not available in any current television today, but that is about to change. Sony and LG’s 2020 OLED televisions, announced at this year’s CES but not yet in stores, will also support 120Hz at 4K, when they begin shipping later this year. Surprisingly, there’s no support for HDR on this monitor, despite the popularity of HDR gaming.

That leaves Alienware's 55 OLED gaming monitor in a precarious position – why would you buy this when OLED televisions are about to support its key gaming features, at around half the price?

Tags: Alienware, invade, monitor, to, yo
You may also like
Celebrities News