Come on chaps, ditch that worn out fleece and dress with a dash of panache! Ex-Vogue editor ALEXANDRA SHULMAN issues a rallying cry inspired by Downton Dan’s crazy coat and the slow death of the office suit

When actor Dan Stevens turned up at the premiere of his new drama series Gaslit, he swapped his clean-cut Downton tweeds for a patterned sherbet-coloured silk ensemble. I thought he looked great.

OK, I could have done without the Seventies moustache, a look that has never suited any man, and the clodhopping striped shoes were simply frightful.

And I know there will be others, mainly men, who disagree and thought he looked ridiculous. But at least he was making an effort to ditch the dull uniformity that informs most men’s dress. And challenged the security of just looking exactly the same as everyone else.

Many years back, when I was in my 20s, my then boyfriend landed an important job at The Times newspaper. On the weekend before he joined we went to a boutique in Covent Garden to find him something to wear.

We could have gone to Burton or Marks & Spencer, but I urged him to try to be a little more original. 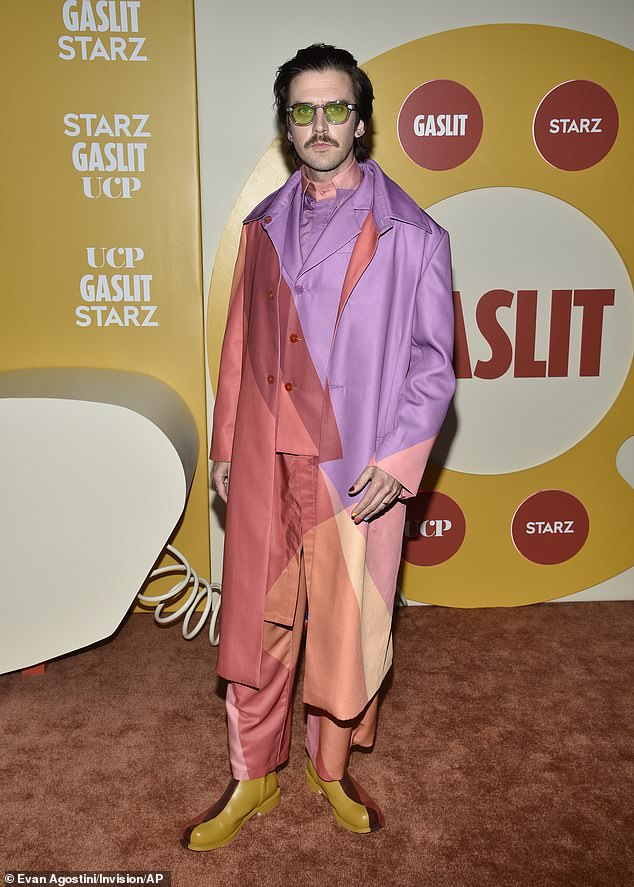 When actor Dan Stevens turned up at the premiere of his new drama series Gaslit, he swapped his clean-cut Downton tweeds for a patterned sherbet-coloured silk ensemble. I thought he looked great

We came away with a green tweed jacket and dark green corduroy trousers, which I assured him, with the total conviction of someone who had never been near a newspaper office, would be just the thing.

He returned after his first day of work practically in tears. How could I, he shouted, have encouraged him to wear such an outfit? Nobody, literally nobody, wore green. They were all in grey suits.

I imagine many men will sympathise with him being bossed into some daft clothes by his girlfriend. While many women will understand that I had wanted him to stand out as a young man of style.

That was more than 30 years ago and now, for the first time in several generations, those grey suits are falling out of favour. The recent shopping basket used as the marker of inflation no longer included the business suit as a common household item.

Sales of suits have more than halved in the past five years from 4.2 million down to 2 million, and today they are stocked by fewer than half the branches of Marks & Spencer. 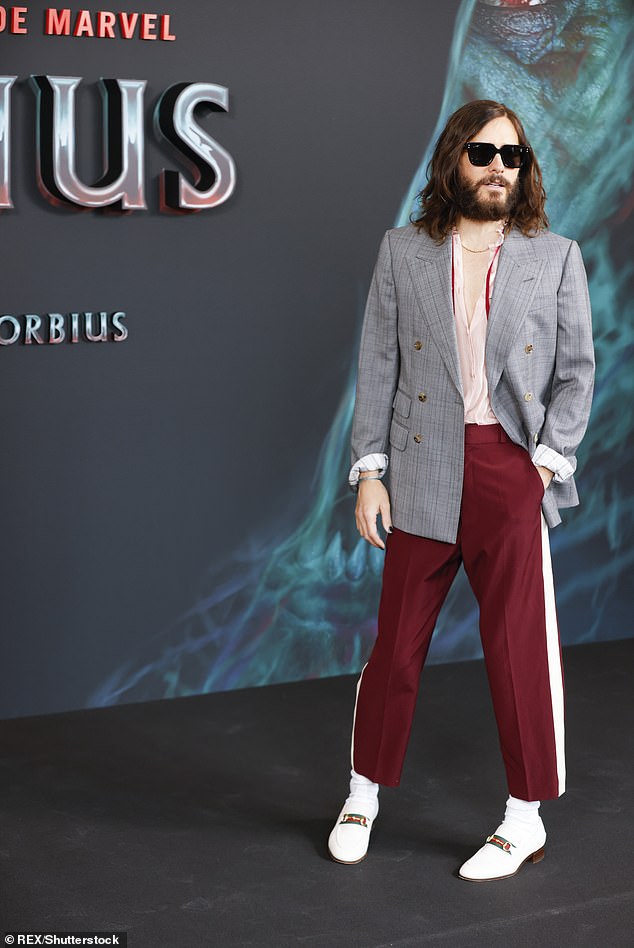 Sales of suits have more than halved in the past five years from 4.2 million down to 2 million, and today they are stocked by fewer than half the branches of Marks & Spencer (pictured: Jared Leto)

Of course the lockdown and the pandemic have changed much of our working practice and dress codes. No one’s been wearing a suit on Zoom.

A man working from his kitchen table all day was hardly likely to put on a tailored jacket for a Microsoft Teams call, any more than a woman would stalk around in high heels and a body-con dress as she juggled home schooling with her day job.

But as we return back to what we regard as normality, out and about in the shops, playgrounds, airports, and high streets, what do you see?

Crowds of men dressed in a uniform as identical and unimaginative as the Mao suit of communism. The difference is that they are all wearing their padded jackets, jeans, trackies, hoodies and trainers out of choice.

A friend reports seeing a man in a baseball cap, padded jacket and trainers sitting on the floor outside Chelsea Town Hall on King’s Road. Around the corner was a man wearing identical clothes with a sign about his homeless status.

She had no idea whether the guy outside the town hall was similarly unfortunate or a local millionaire waiting for the Saturday yoga class that takes place in the hall. It’s a bleak landscape out there.

The fact is that it is only in the past 150-odd years that so many men have dressed in a generally drab, dull, formulaic and somewhat anonymous style.

The current exhibition at the V&A, Fashioning Masculinities, brilliantly illustrates how men’s dress has evolved, showing how in times past menswear was more flamboyant, colourful and extravagant than women’s. 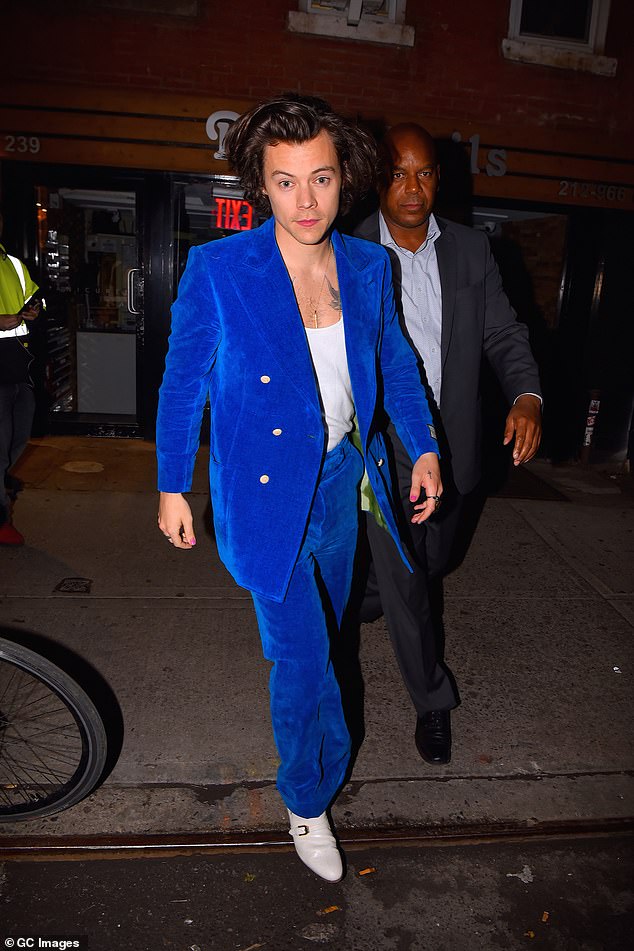 Of course the lockdown and the pandemic have changed much of our working practice and dress codes. No one’s been wearing a suit on Zoom (pictured: Harry Styles)

Until the last century men were peacocks and blazed in velvets and silk, lace and furbelows. They wore tights, full-skirted cloaks and jackets and dainty satin shoes. And colour. Emeralds and turquoises, crimsons and pinks.

Pink – the colour that we now associate with little girls and Disney – was for many generations the colour of power, wealth and pomp.

So where have all the peacocks gone? What happened to turn our menfolk into the drab pigeons of today? The answer is progress, of a sort.

The technologies of the Industrial Revolution changed society in every way. Huge new cities emerged as the population migrated from the villages to work in the factories.

The streets were crowded with people from every strata of society and a professional middle-class grew up working in offices that catered for this new urban lifestyle. 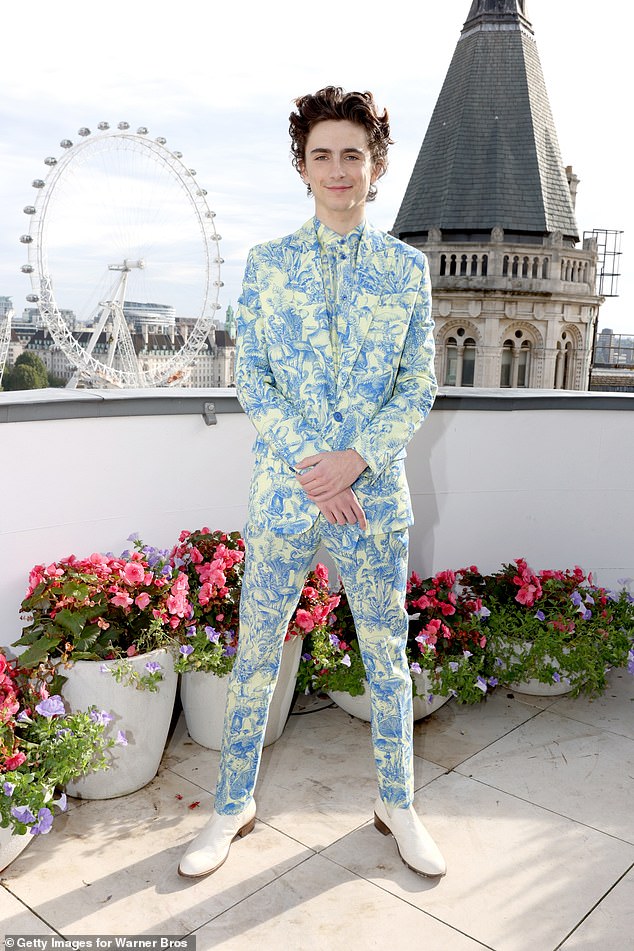 But as we return back to what we regard as normality, out and about in the shops, playgrounds, airports, and high streets, what do you see? (pictured: Timothée Chalamet)

The cottons and worsted wool of the workers on the land and the satins of their bosses were exchanged for an item that was practical both for life indoors and the increased travelling from place to place. That was the suit. And now all these years later, it is again technology that has shifted the male dress code.

The techies of Silicon Valley, those young, ambitious visionaries, who have changed our world with the debatable improvement of leading our life via a screen, didn’t embrace colourful idiosyncrasy in their dress. They didn’t have any wish to liven up the sartorial mainstream, as did the dandies of the youthquake times of the Sixties.

No they’ve adopted a dreary, dress-down style that men have jumped on the world over. Because, I fear, it’s comfortable, indistinctive and undemanding.

And that is, unfortunately, just how many men want to dress.

They want to keep it simple, as Barack Obama did when he was President, wearing the same style of suit every day so as not to have to make a decision about his clothes.

But do they really need to be so unadventurous in their get-ups? Is there any hope that men might shake off the ubiquitous shackles of athleisure and run a bit more wild in their dress?

I suspect many women would love that.

To see them display some sense of adventure and individuality.

Not everyone can or should dress like David Hockney in his brilliant colours, or Harry Styles in his gender-bending looks, but surely there is life after the puffa jacket and fleece. 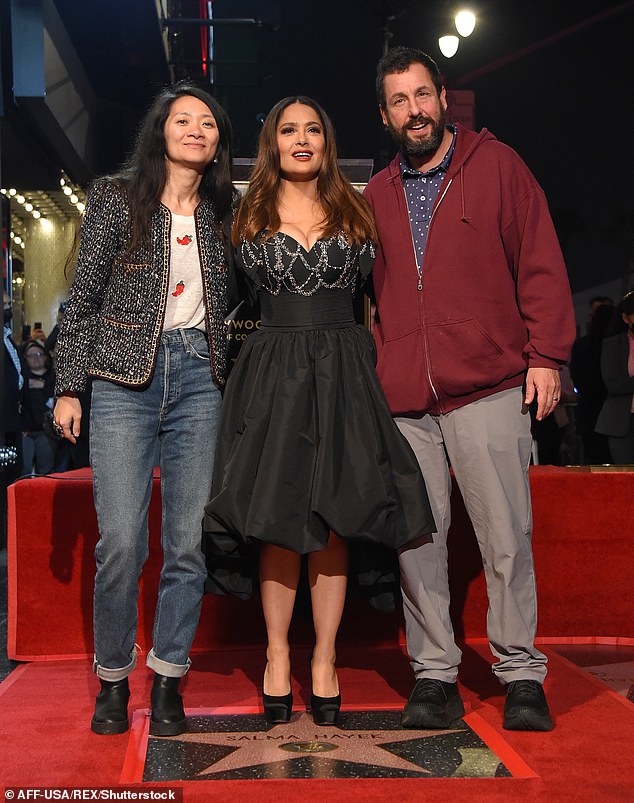 It’s not that difficult to experiment with coloured tailoring – few men look bad in coloured velvet. Patterned shirts don’t only have to be for the beach.

The fleece top is one of the most unattractive items of all time – return at least to the jacket, please, or a colourful knit vest.

And this I know is really out there, but all men look good in pearls!

Actually there is reason to hope. The pendulum of fashion reliably swings first one way and then the other, which could well mean that we are due a wonderful revival of the old days, when men were resplendent in their velvets and frills.

Certainly there are young men now who are already interpreting genderless fashion not as a bleak unisex boilersuit but with bold style, mixing both traditional men’s and women’s clothes.

Recently I gave a talk at a conference of business owners on the subject Should You Dress For Success? In the following Q&A, this popped up – ‘If the men’s suit is over, what do you think will take its place?’

My answer – quite possibly the skirt. Crazy? No. Not necessarily. After all, as you can see at the V&A, it won’t be the first time.