The government watchdog says Australian Federal Police officers investigating how Energy Minister Angus Taylor's office sent allegedly fraudulent documents to a newspaper should have talked to him directly before ending the investigation.

The Commonwealth Ombudsman received about 150 complaints about the AFP’s decision in February not to investigate how the allegedly fake version of the City of Sydney's annual report was sent to The Daily Telegraph to attack Sydney Lord Mayor Clover Moore over her council's travel expenses. 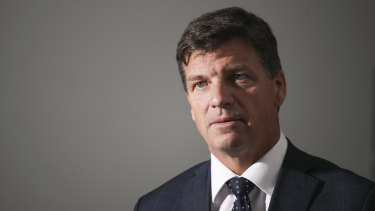 Mr Taylor has maintained the document was downloaded from the City of Sydney's website, but the AFP chose not to investigate after talking to his lawyer and receiving a legal letter.

"It would have been preferable for the AFP to have undertaken at least one more step prior to making a decision to cease its investigation, namely to have made direct inquiries of Mr Taylor or his office," Ombudsman Michael Manthorpe said in a statement on Monday.

"The question of whether or not an offence occurred and, if so, by whom remains unresolved."

Mr Manthorpe said it was within the AFP's powers to consider the case and choose not to investigate, based on the amount of resources it would take to solve.

The AFP said it could have better explained its decision not to pursue the matter, which it said had already been "thoroughly" investigated by NSW Police.

"The AFP accepts that a greater level of detail relating to its decision making in this matter may be of assistance to the public in being better informed of the justification for the AFP's decision," AFP deputy commissioner investigations Ian McCartney wrote in response to the Ombudsman.

The AFP said it made an objective assessment of a broad range of public interest factors, including the low level of criminality, ongoing harm to the Australian public and the improbability of obtaining sufficient admissible evidence, which ultimately weighed against taking further investigative action in the case.

The investigation was originally referred to the AFP after Mr Taylor relied on an incorrect version of page 14 of the City of Sydney's annual statutory report for the year to June 2018 to accuse it of overspending on travel. The document wrongly showed the cost of interstate visits by councillors while representing the council was "$14.2" and the cost of overseas visits by councillors was "$1.7".

The federal Environment Department in November 2019 said the City of Sydney's website was accessed by the minister's office on September 9, three weeks before the story was published in the Daily Telegraph. There were no records of PDF or Word documents being downloaded on that date.

Tags: AFP, have, should, talked, Tayl, to
You may also like
Celebrities News