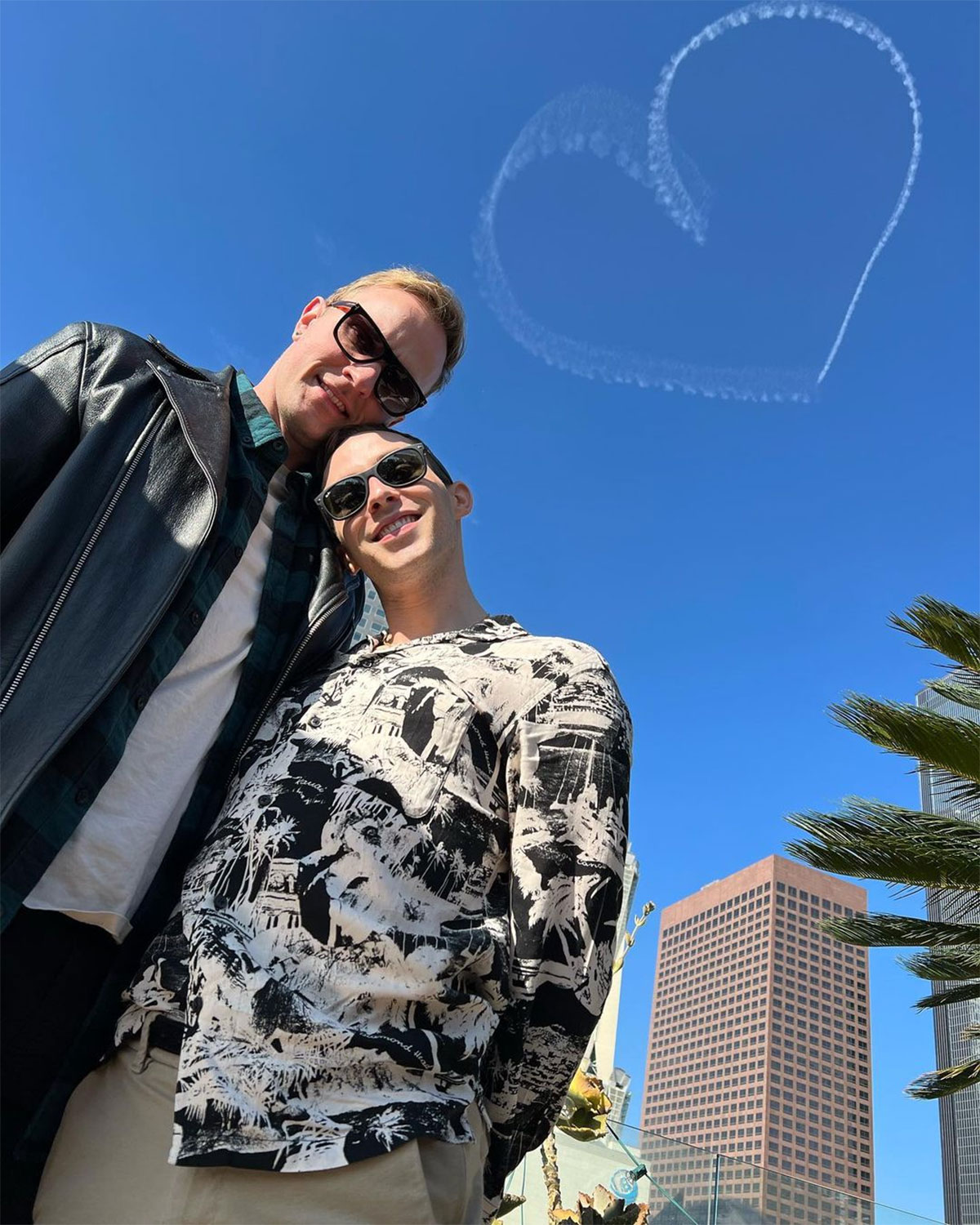 Feels like home! Adam Rippon‘s fiancé, Jussi-Pekka Kajaala, is putting down roots on the West Coast after years of long-distance romance.

‘Dancing With the Stars’ Winners Through the Years

“After over a year a [sic] waiting my beautiful fiancé has finally moved to LA,” the Olympian, 32, gushed via Instagram on Monday, December 20, alongside a series of sweet PDA pics. “To celebrate I’m dressed as a mid level real-estate agent from Peoria, AZ. #iLoveYouJP #Dress4Success.”

The athlete’s mom, Kelly, celebrated the major milestone with a loving comment. “Christmas miracle ❤️ of the best variety. Welcome JP 😘,” she wrote.

Designer Jeremy Scott teased, “SO HAPPY FOR YOU AND IM LOOKING FOR A OFFICE SPACE IN DOWNTOWN PEORIA IF YOU CAN SHOW ME SOMETHING IN MY PRICE RANGE ?”

Rippon and Kajaala announced their engagement in February after meeting on a dating app three years prior. The couple each popped the question to one another in Kajaala’s native Finland.

Celebrities Who Got Engaged in 2021

“JP and I didn’t get to see each other for almost all of 2020 because of the pandemic. When there was finally a chance for me to go and see him in Finland, I jumped at it,” the Dancing With the Stars season 26 alum noted via Instagram at the time, sharing several photos of the romantic moment. “I was there for a little over two months. … He would drive me into the Finnish forest where I would attempt to try and ‘help’ him shovel snow so he could keep working on the cottage he’s building. So, in between all that and binging the entire 4 seasons of The Crown, we bought ourselves some rings and said that magic word.. ‘duh!’ We got ~*engaged*~ 🥂❤️.” 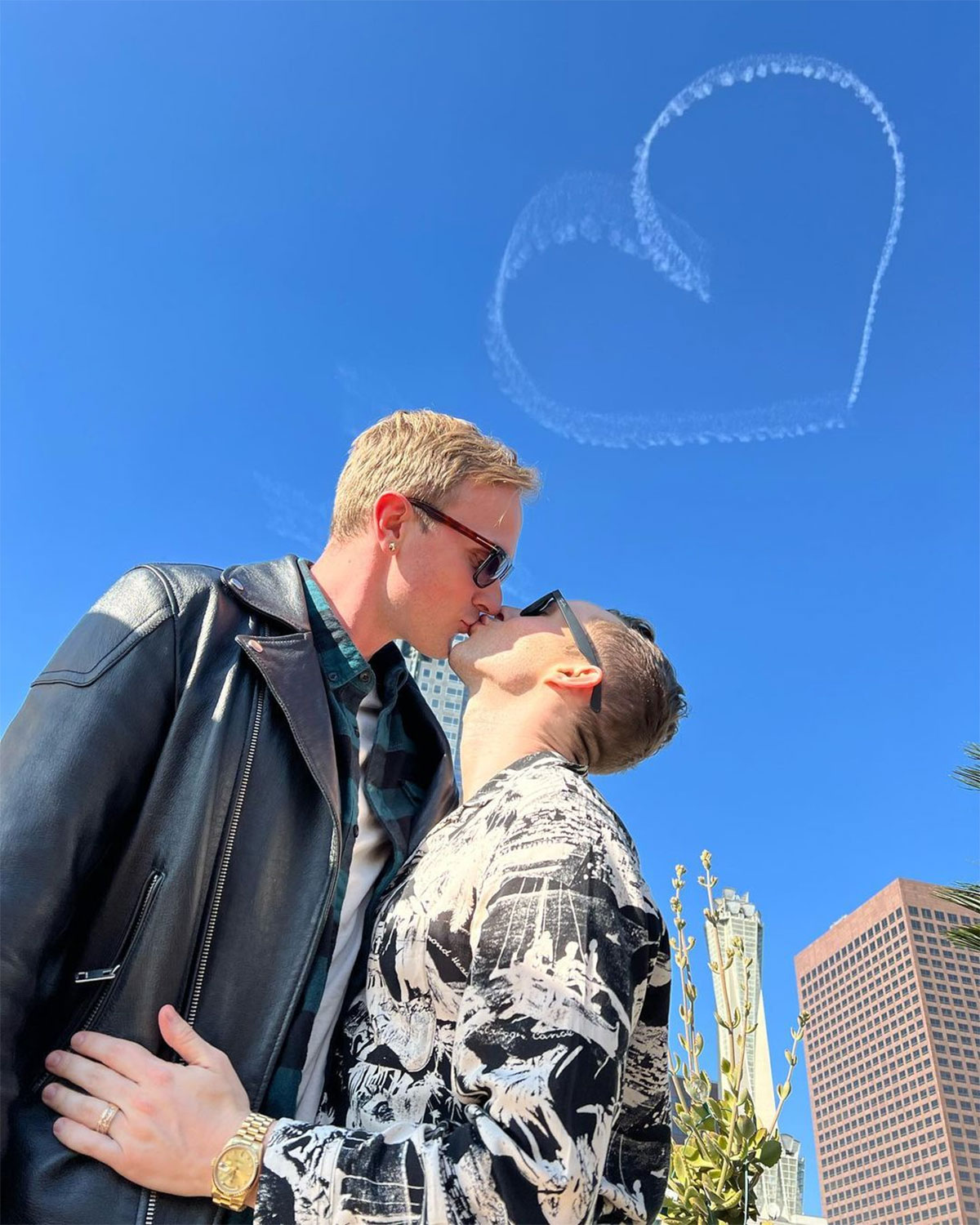 In April 2019, one year into their romance, Rippon hinted that he was already thinking about a future with his now-fiancé.

“It’s going great,” he gushed exclusively to Us Weekly at the time. “You know, you never know [about marriage]. It would be nice. My whole family loves him and he’s just a great guy. My family loves him, my mom loves him.”

The Pennsylvania native gained a major following after competing at the 2018 Winter Olympics in PyeongChang, South Korea, where he earned a bronze medal in the team figure skating event. After his stellar performance, Rippon teased that plenty of potential suitors were sliding into his DMs — but he didn’t think much of it at the time.

Celebrities Who Love The Olympics

“I think that even right now, even the idea of dating, doesn’t even sound super appealing because I’m so busy right now,” he told Us in March 2018. “So I have this master plan that goes as follows: that I’ll be doing this stuff and I’ll magically meet someone who is funny, who’s smart, who goes to the gym and can keep me on my toes when it comes to giving me a hard time and being witty, and basically anybody who can make me laugh is one step closer to winning the crown.”

Kajaala seemingly checked off all of Rippon’s boxes, and after their engagement, the Beautiful on the Outside author opened up about how important it was for him to share his relationship with the world.

“It was, with JP, the first time that I thought, like, ‘Oh, yeah.’ Now I know that feeling of, like, ‘Oh, I could marry somebody,’” he told ABC News earlier this year. “I had that feeling with him. … I think that representation and seeing other people in different circumstances can help inspire [others].”