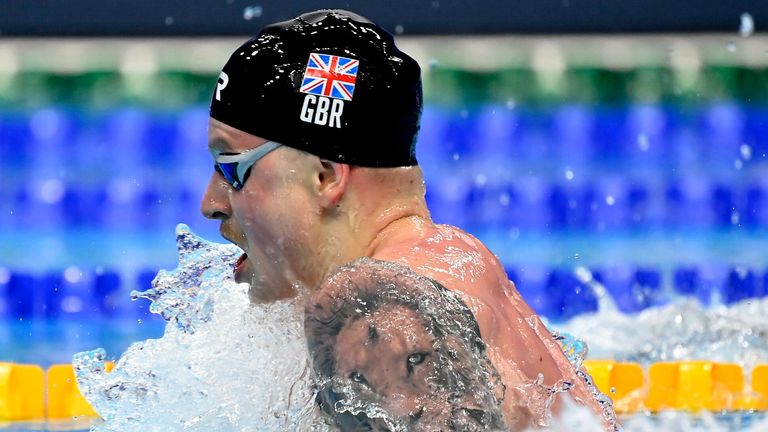 Adam Peaty feels liberated rather than inhibited by expectations this summer as he seeks to become the first British swimmer to successfully defend an Olympic title at the rearranged Tokyo Games.

Peaty started Team GB’s gold rush at Rio 2016 by topping the podium in the 100m breaststroke in a world-record time and he has only improved, notably going under 57 seconds at the world championships two years ago.

He sent an ominous warning to his rivals with a world-leading 57.39 secs at the British trials earlier this year, which is more than half a second quicker than anyone else has ever managed in the event.

Holland’s Arno Kamminga is the only other swimmer to breach 58 seconds after clocking 57.9s in April but Peaty is understandably confident with the favourite tag that will be bestowed upon him in Japan.

The 26-year-old from Uttoxeter is further emboldened by the knowledge he and his GB team-mates have the power to lift the mood of a nation hard hit by the Covid-19 pandemic.

“Pressure, for me, is more of a freedom than something that’s going to restrain me,” Peaty said.

“I’m a very chilled guy. As soon as you take sport out of context of what it actually is – which is: two lengths and swim it as fast as you can and hopefully dominate.

“I know the pressure is there, I know the country is looking for hope and they will be looking to the Olympic team.

“There will be kids who stay up to watch these races, I just want to do it for the next generation of Olympians because I know how I felt [at London 2012] watching that on my TV. I wanted to be that, I wanted to be an Olympian.

“Creating that next generation of hope when we’ve had so much thrown at us as athletes and a country, this can ultimately give me freedom.” The stricter restrictions around travel during the coronavirus pandemic have hampered Peaty’s preparations in the build-up to these Games as he revealed he has not had a proper training camp since January last year.

However, as well as knowing his fellow competitors will be in similar or identical situations, the philosophy instilled into him by coach and former Olympic swimmer Melanie Marshall leaves Peaty ready for anything.

“Covid has changed a lot of athletes’ preparations,” he said. “That’s just the way it is. As an individual athlete, you’ve just got to take it on the chin and prepare the best you can.

“If you have that mentality and approach to every single race, it doesn’t matter, you’re still going to get that best performance and I’ve treated that from 2016 into 2017 into 2018 into 2019… and hopefully into these Games.”

Peaty may very well break his own world record once again but he insisted, if not, he will have no lingering thoughts as to what he could have achieved had the Olympics gone ahead as scheduled last summer.

“I don’t live my life with ‘what ifs’ because there’s so many ‘what ifs’ in everyone’s life that you almost become depressed if you think about everything you could have done or should have been,” he added.

“I’m not living my life in a ‘shoulda, woulda, coulda’, I’m living in the present right now.” 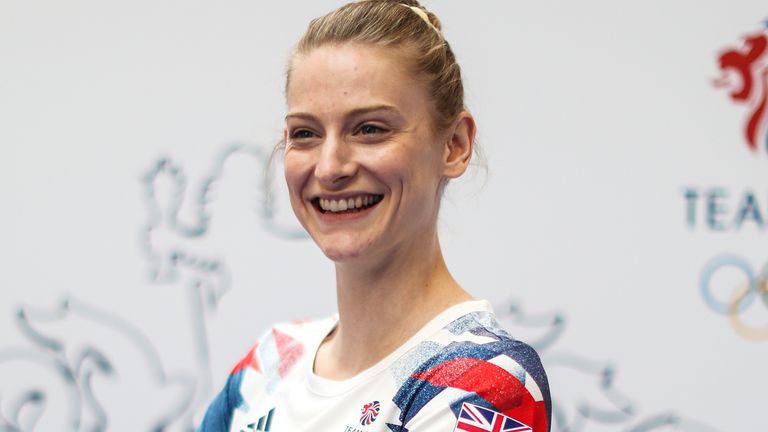 Page: I trained with more freedom after medal in Rio

Bryony Page has admitted she struggled to come to terms with the relative fame that followed her surprise trampoline silver medal at the Rio 2016 Olympics.

The 30-year-old, who describes herself as “quite an introverted person”, suddenly found herself being recognised in public and saddled with the increased expectation that comes with earning a major medal.

Page, who has subsequently established herself among the world’s elite and will be looking to go one better in Tokyo later this month, said: “Things changed little perspective-wise.

“I had always been worried that I would never achieve my potential, and being able to do that in Rio took a weight off my shoulders, and meant that I was able to train with slightly more freedom.

“Most of my life hasn’t changed that much, except that when I go to a competition more people know me and my story. At first, it was a little bit daunting and having someone come up to me wanting to talk still feels a little bit strange.

“Coming out of Rio I felt like I could deal with anything and I really believed in myself, but then going straight into injury rehab left me doubting whether I was going to be able to get back to the standard I was at.

“Once I managed to do that I got the motivation to push past that glass ceiling and become even better than I was before. The extra year has definitely helped and I am already looking to keep training after these Olympics with some really big ideas.” Ethan Hayter expects the men’s team pursuit to be one of the most competitive events at the Tokyo Olympics as Great Britain’s dominance in the velodrome comes under threat.

The Brits have bossed the blue ribband event since Beijing in 2008 but will head to Japan as underdogs after Denmark broke the world record three times in two days at last year’s world championships.

Hayter was part of a British quartet that finished fifth in Berlin, but he insisted that was not a true indication of their potential. The problem is that, with so much racing cancelled in the last 15 months, nobody knows how far their rivals have come.

“I really think it’s going to be one of the most interesting events at the Olympics,” Hayter said.

“There are five or six countries who, depending on how they’ve stepped up, could be winning it.

“At the World Championships, we were so limited by commercial deals and what equipment we could use,” said Hayter, who added that Britain’s new kit will transform their potential.

“It’s not just the new bike, it’s everything. At the World Championships, everyone else was catching on with new equipment and using really good stuff, and we were stuck with certain deals. Once you change that, you’re suddenly going a lot faster, faster than ever before.

“In qualifying, we were four seconds off but we’ve been faster than that in training. We are competitive.”