It’s easy to find reminders of the classic Vietnam war films of the 1970s in Australian director Storm Ashwood’s Escape and Evasion, but the scaffolding which surrounds them is too weak to give them form. It’s not the script which provides the film’s punch. That comes from Josh McConville’s embodiment of an Australian army officer who has returned from a mission to Myanmar suffering post-traumatic stress syndrome. 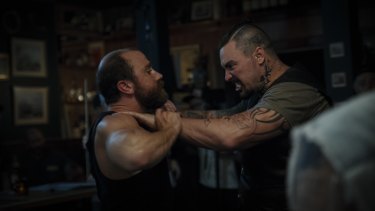 Josh McConville (left) stars as a former soldier with PTSD in Escape and Evasion.

McConville has a brooding look and the bulk to back it up – credentials which, in the past, have set him up for roles as alpha males nursing grudges. If that were all, he would be stuck forever playing characters who supply the muscle protecting somebody else’s brains, but he’s more subtle than that. He may be big and bearish, but he traces the patterns of guilt and anger warping this desperate soldier’s sense of self with a delicacy that keeps you with him every step of the way.

Seth is unsuccessfully trying to recuperate from his tour of duty in a gloomy little shack on the Gold Coast near his ex-wife and young daughter, Lizzy (Jessi Robertson), another of the unnervingly wise children to be found on the screen these days. A born peacemaker, she adores him as he adores her. His ex is less forgiving because he’s steadfastly refusing to seek help for the hallucinations that are part of his Myanmar hangover. I think I got this right but at one point, somebody passes him the business card of a psychiatrist called Freud Lacan. If so, it’s the film’s only shaft of humour, black or otherwise.

Seth and his unit were supposedly on a landmine-clearing mission, but his fellow soldiers have not returned and it’s clear from his guarded conversations with New Zealand actress Rena Owen, cast as a pragmatic intelligence officer of strictly limited compassion, that something covert was involved.

Ashwood begins to tease out the truth with glimpses of the mission gleaned from Seth’s dreams and delusions and these keep us interested, serving well enough as a build-up to the final revelation. At the same time, he’s being pumped for information by Rebecca (Bonnie Sveen), a journalist who is also the twin sister of Josh (Hugh Sheridan), one of the missing soldiers and Seth’s best friend. Less credible is the fact she’s starting to fall in love with him, and he with her.

What makes the film work is McConville’s success in evoking a sense of what it must be like to suffer PTSD. Seth never knows what will spark his next attack. It might the unheralded pop of a balloon or the awareness of a figure looming up behind him in a bar that pitches him into a state of sweaty panic. Even Lizzy is thrown by these moments, as her sweet-natured father is suddenly transformed into a stranger – a hostile hysteric who’s lost all contact with the here and now and landed in some nightmarish world she can neither enter nor understand.

Fifty minutes in, the secret haunting him is revealed in an extended flashback which takes you into the Myanmar jungles and sets out to re-create the atmosphere of blurred reality that can distort perception in a guerrilla war when decisions have to be made at speed in murky circumstances. The involvement of civilian women and children in this one makes the result of these instant responses even more explosive.

But the effect is not entirely convincing because the central premise is so far-fetched and the climax introduces a character drawn with such cartoonish relish that caricature takes over for the first time in a film that has, up until now, been scrupulous in its determination to get things right.

The ending, too, is a bit neat and predictable to be persuasive, but through all the implausibilities, McConville’s performance never falters. He comes close to having you believe it all, but not quite close enough.

Tags: A, gives, Josh, McConville, strong
You may also like
Celebrities News