A national blueprint to reduce violence against women will commit funding to “much more ambitious” programs with a sharper focus on prevention amid community demands for stronger measures.

The Morrison government is planning to widen the scope of a three-year deal with the states to spend hundreds of millions of dollars on new services, naming financial and coercive control of women as areas for greater action. 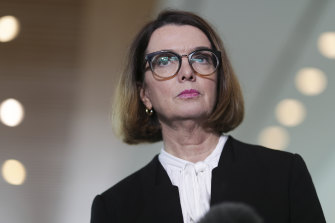 Anne Ruston has named issues such as financial and coercive control and better standards for social media as areas for stronger action to “change attitudes everywhere” through a suite of policies to be agreed with the states by September.Credit:Alex Ellinghausen

Social Services Minister Anne Ruston will take the agenda to a meeting with state counterparts on Wednesday to address the “horrifying” social problem that sees one woman killed every nine days at the hands of an intimate partner.

“The next national plan has the ability to be much broader in scope and to be much more ambitious than the last plan,” Senator Ruston told this masthead.

“The last plan was very focused on creating awareness of the issue of domestic violence but the next plan, I think, can be much more ambitious about addressing the problem and actually preventing it [from] occurring.

“Because we need to actually deal with the issue, which is a rot in society, and we have to deal with it at its root, and we can only do that by changing people’s behaviour.”

The last three-year national plan, under which $328 million was outlaid on programs to curb violence towards women, is due to end this year. Experts are calling for a dramatic increase in spending on emergency housing, legal help, counselling services, education in schools, Indigenous support and more.

Women’s Safety NSW chief Hayley Foster said services had never been in higher demand and federal support alone should be scaled up to $12 billion over 12 years.

Ms Foster said the substantial increase would bring anti-violence measures into line with federal spending in other fields such as community legal services, mental health and disability support.

Anne Summers, who led the Office of the Status of Women in the Hawke government, this week cited figures from the Australian Institute of Health and Welfare that showed levels of partner violence and sexual violence were unchanged from 2005.

“So, it would seem that the national plan has had zero impact on reducing violence against women. If anything, given the likely undercounting, this violence has actually increased,” she wrote.

Prime Minister Scott Morrison has raised expectations for new policies and more spending after announcing a taskforce on women’s equality, safety, economic security, health and wellbeing in Monday’s cabinet reshuffle and admitting last month that many Australians thought he was not listening to concerns about the treatment of women.

Senator Ruston said it was too soon to talk about funding, given the federal budget is due on May 11, but she wanted the next national plan to be very ambitious.

She named issues such as financial and coercive control and better standards for social media as areas for stronger action to “change attitudes everywhere” through a suite of policies to be agreed with the states by September.

“The statistics that we have are, I think, quite horrifying. That one woman every nine days is killed at the hands of an intimate partner is a very sad indictment on a modern country like Australia,” she said.

“The number of women who are hospitalised from domestic violence, the very high incidence of domestic violence amongst our Indigenous communities – they are all statistics that we as a country need to tackle.”

In a sign of political momentum for more spending, a bipartisan parliamentary committee issued 88 recommendations on Thursday to reduce violence, saying the next funding round should include specific targets.

“The target needs to be towards zero,” Senator Ruston said. “In a modern country like Australia, we should be seeking for there to be no family domestic and sexual violence.

‘In a modern country like Australia, we should be seeking for there to be no family domestic and sexual violence.’

“The only target that we can reasonably put our hand on at heart and say that we want is a zero one, but we need the data to underpin this because at least that way we have a basis on which to measure the direction we’re going.”

The parliamentary inquiry, by the House Standing Committee on Social Policy and Legal Affairs, said the next national plan should address violence against men, older Australians, LGBTQI people and people living with a disability but noted the overwhelming problem was violence against women by men.

The meeting with state ministers on Wednesday will discuss a national summit to be held in the coming months to influence a funding deal between federal and state governments to be issued in draft form by September.

Senator Ruston said the wave of public concern in recent weeks, starting when former government adviser Brittany Higgins went public on February 15 with an allegation of rape inside Parliament House, meant the summit should hear as many voices as possible.

“There’s no doubt that it has elevated the issue in the public mind, which gives us an opportunity, I think, to do much, much more,” she said of the debate. “I think Australia is listening in a much bigger way to the conversation and is much more engaged in the conversation.”

While the national plan will take months to negotiate, the federal government offered a separate $150 million to the states last year to act on concerns the coronavirus pandemic could lead to increased domestic violence.

Senator Ruston is also offering long-term funding to the 1800RESPECT telephone helpline over five years, taking it out of the usual three-year national plan.

Tags: A, in, Pro, Rot, Ruston, society’:
You may also like
Celebrities News