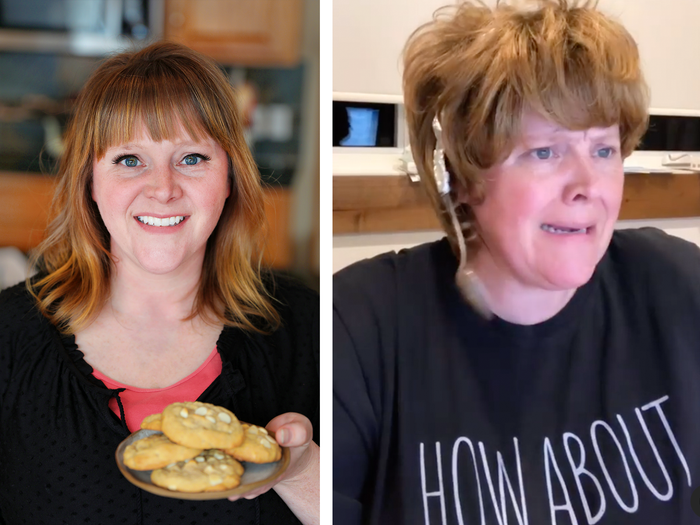 Food bloggers, like just about anyone on the internet, are no strangers to mean comments. But one Minnesota-based food blogger found a clever way to turn the tables on her haters.

Amanda Rettke, who has run the food blog I Am Baker for about 10 years, recently went viral for her series of videos, which she's dubbed the "Your Content Is Terrible" hotline. The videos feature Rettke in character as "Shirley," a fast-talking Minnesota customer service representative who works for the fake hotline and responds to the mean comments Rettke gets.

The shtick is that Shirley is upbeat and charming while she fields increasingly ridiculous complaints, taking the side of the "caller" and promising to file complaints on their behalf.

"I get hundreds of these comments that are like, 'You're ugly. You're fat, stop eating so much. This is why Americans are so fat.' It is comments after comments," Rettke, who has sizable followings on Instagram (378,000 followers, including Joanna Gaines) and Facebook (4 million followers), told Insider.

Rettke said that she thinks the coronavirus pandemic made the comments meaner.

"I can handle comments. We've been handling them for years. But for some reason, there was this huge spike when everyone was at home and was getting offended," she told Insider.

"If I shared a pork recipe, it was offending a vegan. If I shared a salad, I was offending the person who was like, 'why don't you share bacon?' There was always someone to be offended by something. And I just kind of had had it up to my eyeballs," she added.

Though she doesn't remember the exact comment, Rettke said that mean-spirited feedback about a chocolate cake recipe lit the fire to create Shirley. But Rettke said that the most intensely negative feedback she's ever received predates Shirley. She told Insider she once got death threats after sharing a recipe for rainbow-colored pancakes that angered viewers who were both concerned about the amount of food coloring in the recipe and also viewed the recipe as Rettke taking a political stance.

Shirley tackles a variety of topics like advertising, the election, and COVID-19. Rettke said that they're almost never exaggerated, except for the video below which is a response to a customer dissatisfied about receiving emails from a listserv they subscribed to.

Each video begins with Shirley giving a sing-song "Thank you for calling the 'your content is terrible' hotline, how can I help you?" and ends with her promising to "file a report" on the caller's behalf. Viewers only hear Shirley's side of the conversation, but it's not hard to guess what the person at the other end is saying based on Shirley's lengthy responses and context clues.

"She takes the side of the people making these outrageous complaints … but she does it in a way that is somewhat charming," Rettke said of her character's persona.

While Rettke might receive negative comments, Shirley is definitely a hit.

"BEYOND GENIUS," one fan wrote in all caps in response to a recent video.

"Hilarious as always!" another person commented.

"I am from Minnesota, and I grew up in North Dakota, so the accent is not faked or forced. I can get there really fast if I need to," Rettke said. She added that there is a slice of her family, like aunts and uncles, in Shirley.

Rettke created the character by googling "Karen wig" and buying the first one she found. ("Karen" is a negative term and popular meme used to describe people, in most cases, white women, who make unnecessary demands such as asking to speak to the manager, Asitha Nagesh wrote for the BBC.) She also put together a quick makeshift headset out of aluminum foil and a spoon. Her first few videos don't feature the wig, but the homemade headset makes an appearance from the beginning.

The time she spent browsing TikTok also inspired Rettke. She told Insider she saw some TikTok creators posting similar headset videos and got the idea to tailor it to her content and audience.

"That was absolutely not my original idea by any means, but I knew that I could make it unique to food because nobody thinks about food bloggers ever for anything," Rettke said.

Rettke told Insider that she'll continue making these videos for as long as her viewers enjoy them.

"I assume every single morning that I'm going to wake up and everyone's going to be absolutely sick of it and never want to see another one again. I'm ready for that moment and I'll go right back to food blogging again," Rettke said.