Bill Shorten has been busy. Across many radio and television interviews, and even an opinion piece in the West Australian newspaper, the former Labor leader has been making himself heard on what the Morrison government – and implicitly, the Albanese opposition – ought to be doing.

“There’s a very fine line between being too weak in opposition and too strong in opposition,” he opined on one radio station last week. “I was opposition leader for six years. I guarantee you, that line is invisible to the human eye. You’re either too weak or too negative. I think we’ve been getting the balance right.” 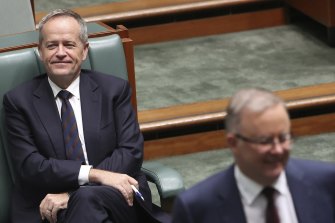 Labor is in a difficult moment. The federal opposition has seen its political fortunes wax and wane multiple times this year as the vaccine rollout began and then faltered badly, the Brittany Higgins allegations surfaced, a well-received budget and lacklustre reply bit and then, tragically, the Delta variant has taken hold in NSW, then Victoria and then the ACT.

Albanese’s line of attack on Scott Morrison – that he had two jobs: vaccination and fit-for-purpose quarantine – has worked until now.

But Australians are also eager for their freedoms. In the south-east of the country – even amid a sense of dread about COVID-19 becoming endemic, with all that entails in terms of illness and death – there is a desire to meet the moment, hit vaccination targets and start to reopen.

The federation is fracturing too, with Queensland and Western Australia enjoying their COVID-zero status and Liberal-led South Australia and Tasmania gone quiet.

There is a growing realisation in Labor’s federal caucus that the “two jobs” attack line has a use-by-date as states hasten and hobble (respectively) towards the 70 and 80 per cent vaccination targets.

There is also concern within Labor about the polls. The Australian’s Newspoll has the opposition ahead 54-46 in the two-party preferred vote and 40-36 on the primary vote.

But The Age and the Herald’s Resolve Political Monitor tells a very different story, with Labor trailing 32-40 on the primary vote and lagging or line ball on a number of other key indicators. The most recent Resolve findings were widely shared and discussed within the caucus and stoked significant concern.

The criticism is twofold: that Albanese has decided to outsource Labor’s fate to Morrison and rely on the Prime Minister making mistakes (of which he has made plenty) and; secondly, that Shorten is correct when he argues Labor should be selling a more positive and ambitious agenda, with stronger public support for the domestically made AstraZeneca vaccine and a more clearly defined position around issues such as vaccination targets.

In the words of one caucus member: “Our fate is in Morrison’s hands – he f—ks up or he doesn’t. People are off Morrison at the moment but they aren’t on to Albo. People want their kids back at school, they want to travel again. Only Tanya [Plibersek] can win it for sure as she’s being positive”.

Albanese’s reluctance to embrace AstraZeneca, in contrast to Shorten, has been noted. So too has his initial reluctance to push back against the Labor states of Queensland and Western Australia.

Victoria’s Labor Premier Daniel Andrews further complicated the picture this week as he moved from aiming for a return to zero-COVID to accepting his state must live with the virus, and vaccinate as quickly as possible.

A second member of the caucus suggested the opposition leader seemed to want to coast on the popularity of Queensland and WA premiers Annastacia Palaszczuk and Mark McGowan and “hope it rubs off on him”.

The contrary view, put by a member of the shadow cabinet, is that while the “two jobs” line of attack may have a use-by date, it’s a long way off being reached. “When the focus is on Morrison it’s good for us, so why would we make ourselves the focus?” the source says.

Albanese is also broadening out his strategy. He has called for a $300 payment to encourage people to get the jab, for booster shot plans to be laid out and for 12-15-year-olds to be included in the rollout targets – as well as a plan for under-12 vaccination.

The Opposition Leader is determined to stick to a strategic and consistent message. He believes that the vaccine rollout is one of the greatest policy failures by a federal government in decades – and he will keep reminding people about it.

Labor’s dilemma over whether and to what extent to back the plan to reopen Australia at 70 and 80 per cent vaccination coverage of the 16-plus population has run up against Palaszczuk and McGowan, who are both zealously defending their respective states’ zero-COVID status.

In a tweet, Palaszczuk claimed the Doherty Institute predicted 80 people would die each day after six months if the country opened at 70 per cent vaccination. In fact, the modelling predicted about 1457 deaths in the first six months; and that could be dramatically reduced to just 13 deaths in six months with optimal public health measures (such as an effective trace, test and isolate regime). 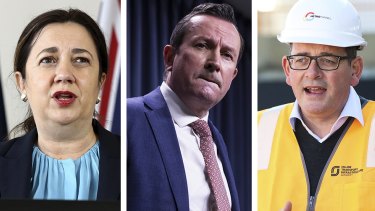 Federal Labor’s deputy leader, Richard Marles, was blunt on Friday morning. “I would be distancing myself from the comments of Annastacia,” he said, before adding that he understood states without COVID-19 wanted to stay that way, and that premiers would stand up for their states.

The back-and-forth between Palaszczuk and Marles forced Albanese to attempt to clean up the split on Friday, which he did by heaping praise on the Premier for her handling of the virus and avoiding his deputy’s comments. 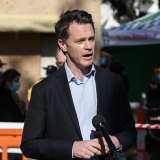 NSW Labor leader Chris Minns says the mood of locked-down voters was indisputable – they want this to be over.Credit:Rhett Wyman

That state-federal division within Labor came a week after Shorten’s comments that Australia must prepare to live with COVID-19, which was seen as a pivotal intervention by some in the party in getting the opposition to support the Doherty modelling and national plan to reopen the country.

Scott Morrison forcefully changed tack and made it a political issue two weeks ago when he said Australians “can’t stay in the cave” (and memorably compared it to The Croods).

Sensing a growing restlessness in a country hit by long lockdowns, Morrison positioned himself as the champion of reopening, and sought to portray Labor as the advocate for staying shut.

Labor’s entirely fair criticism of the slow and troubled vaccine rollout has at times undermined the availability of the safe and effective AstraZeneca vaccine – or simply ignored its existence.

One federal Labor staffer remarked last week that it would be brave for even Albanese to slap down Palaszczuk and indeed, Albanese agrees with Palaszczuk on certain points, even if it’s difficult to discern federal Labor’s actual position on key details. “We need to include 12- to 15-year-olds in the targets or, if not, specify what targets are for them,” Albanese said on Friday.

The national plan as it stands does not require 12- to 15-year-olds to be vaccinated before states open up. Adding them would mean another 1.2 million people have to be double-dosed before the targets are reached.

While federal Labor has equivocated, NSW Labor has backed the reopening plan as clearly as it can. Chris Minns, who replaced Jodi McKay just weeks before Sydney’s Delta outbreak began, said the mood of locked-down voters in NSW was indisputable – they want this to be over.

He acknowledges there is “debate” among his federal counterparts about the party’s position on reopening. “I think Albo hit the nail on the head and said, ‘we’re backing the Doherty advice’. My understanding is that they did it in a meeting and that’s the direction of federal Labor. I think he’s made the right call, the realistic call, given the situation that we find ourselves in NSW, Australia’s largest state.”

For Albanese and federal Labor, there are months ahead of attempting to balance support for state Labor governments, while also not being seen to oppose the gradual opening up of the COVID-affected states of NSW and Victoria.

Stay across the most crucial developments related to the pandemic with the Coronavirus Update. Sign up to receive the weekly newsletter.

Tags: A, between, fine, line, Too, weak
You may also like
Celebrities News