The developers of Eighty Seven Park, the luxury building next to Champlain Towers South, proposed a payment of $400,000 to the association for the now-collapsed condo in exchange for expanded construction hours, a commitment to never publicly oppose the project or the developer, and an agreement to release the developers from all liability, two sources familiar with the matter confirmed to CBS News.

The proposal isn’t dated, but according to one of the sources, it was made “about two years ago” at a time when residents were complaining about debris and “shaking” caused by the construction of Eighty Seven Park and raised concerns about its impact on the “structure” of Champlain Towers South. The offer came in the form of a term sheet presented from 8701 Collins Development, LLC to Champlain Towers South Condominium Association, Inc. It was never ratified.

The sources said another precondition for the $400,000 laid out in the proposal was a commitment by the Champlain Towers South Condominium Association to write letters of support of the Eighty Seven Park project to both the city of Miami Beach and the Town of Surfside. The Condo Association would receive the first $200,000 after those letters were mailed, the sources said, and the rest of the money would be paid when Eighty Seven Park received its temporary certificate of occupancy or on December 31, 2019, whichever came first.

The proposal also included a confidentiality clause and a stipulation that if the condo association or any residents were to breach the agreement, they would have to pay hundreds of thousands of dollars in penalties to the developers. 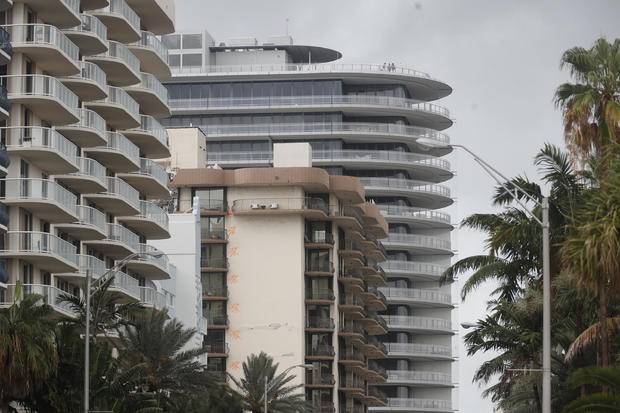 The proposal was first reported by the Washington Post.

A spokesperson for 8701 Collins Development, LLC told CBS News in a statement it is not commenting “on matters unrelated to the tragedy of June 24, 2021.” The spokesperson added, “Any further inquiries regarding this document should be directed to the Champlain Tower South Condominium Association and its legal counsel.”

In a statement, a spokesman for the Champlain Towers South Condominium Association told CBS News the agreement was never signed.

Public records show 8701 Collins Development, LLC is registered to the same Coconut Grove, FL address as a company called Terra Group, one of the developers of the Eighty Seven Park project.

Separately, a lawyer for one of the residents of Champlain Towers South who is now part of a class action lawsuit, told CBS News he was hoping to name Terra Group as one of the defendants in the case because the company would likely have resources to pay victims’ families.

Allyn Kilsheimer, an engineer hired by the Town of Surfside to investigate the collapse, said he would be looking at whether the construction of Eighty Seven Park had an impact on the structural integrity of Champlain Towers South.

“We’re looking at every single thing, and that includes anything to do with any adjacent construction,” said Kilsheimer, adding he has yet to make any determinations on the causes of the collapse.

Documents released by the town of Surfside show in January 2019, a representative of Champlain Towers South named Mara Chouela wrote to Surfside building inspector Ross Prieto, a town building official: “We are concerned that the construction next to Surfside is too close. The terra project on Collins and 87 are digging too close to our property and we have concerns regarding the structure of our building. We just wanted to know if any of tour [sic for town] officials could come by and check.”

Prieto responded, “There is nothing for me to check. The best course of action is to have someone monitor the fence, pool and adjacent areas for damage or hire a consultant to monitor these areas as they are the closest to the construction.”

Despite being next to each other, Champlain Tower South is located in Surfside and Eighty Seven Park is in Miami Beach, outside of Prieto’s jurisdiction.