Here are 13 images selected by HuffPost editors around the world that defined 2020.

Coronavirus changed everything … except rush hour in Tokyo 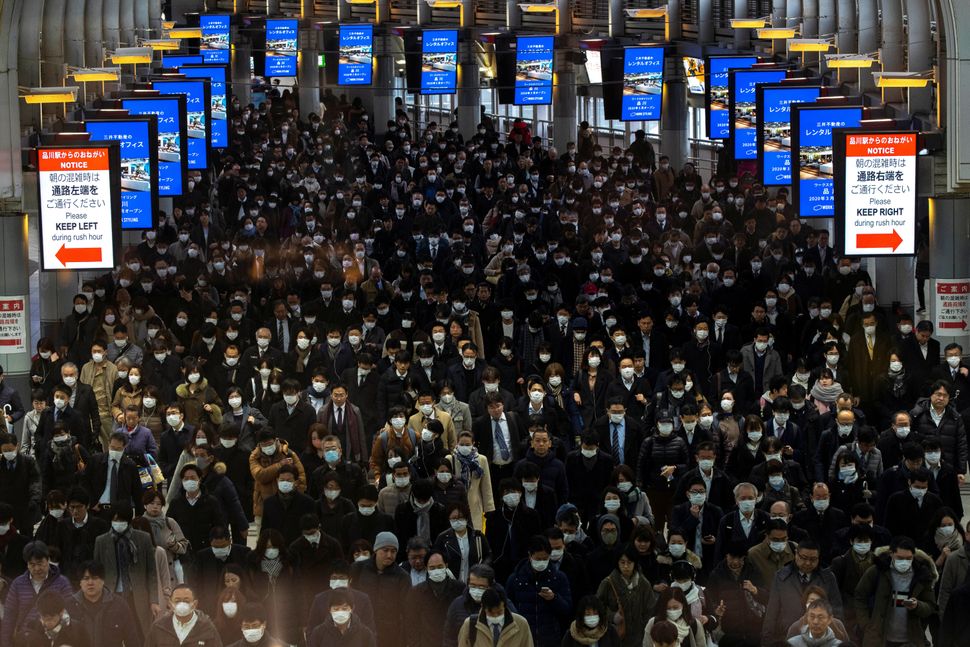 Despite recording fewer deaths than many comparable countries, Japan could not escape the life-altering effects of COVID-19.

In March, the government urged people to avoid crowded spaces and work from home. But not everyone was able to do so, as many employers refused to implement flexible working policies. 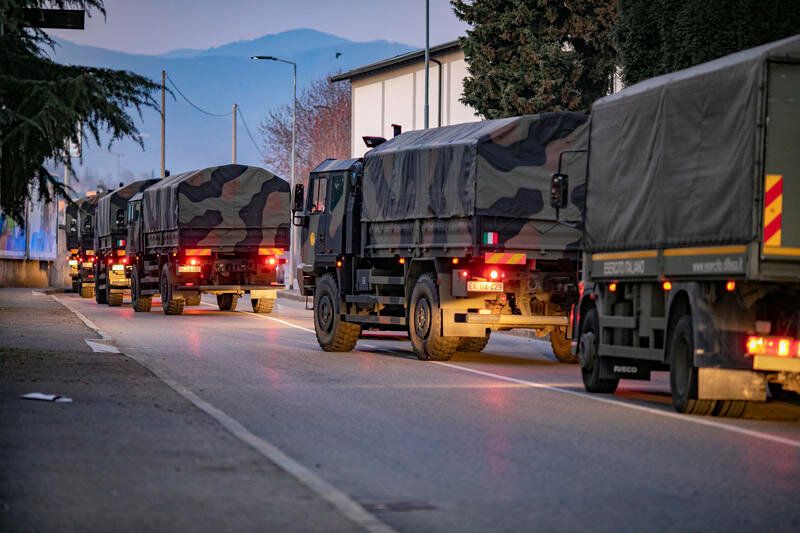 It was the darkest night in Bergamo, the city hardest hit by the coronavirus in Italy.

At the first light of dawn on March 18, 15 army trucks loaded up their precious cargo and drove slowly from the cemetery to the highway out of the city. They carried 65 coffins that the city could not bury: There was no more space in the cemetery, funeral services were collapsing, and they were no longer able to cremate corpses.

On that day, Italy reported 475 coronavirus-related deaths — bringing the country’s total toll to almost 3,000, including 319 in Lombardy, the country’s worst-hit region, where Bergamo is located.

The soldiers escorted the coffins south to the city of Bologna in the neighboring region of Emilia-Romagna. After cremation, the ashes would return to their loved ones. It was the only funeral procession Bergamo could afford. From their windows, people looked on and cried.

Bergamo and its province counted around 6,000 victims in the first wave of COVID-19 during the months of March and April. At the end of June, a requiem mass was held for the fallen of the city, a great collective funeral for all those who could not have an individual funeral. Nearly every Bergamo citizen lost a parent, a child or a sibling in the pandemic. 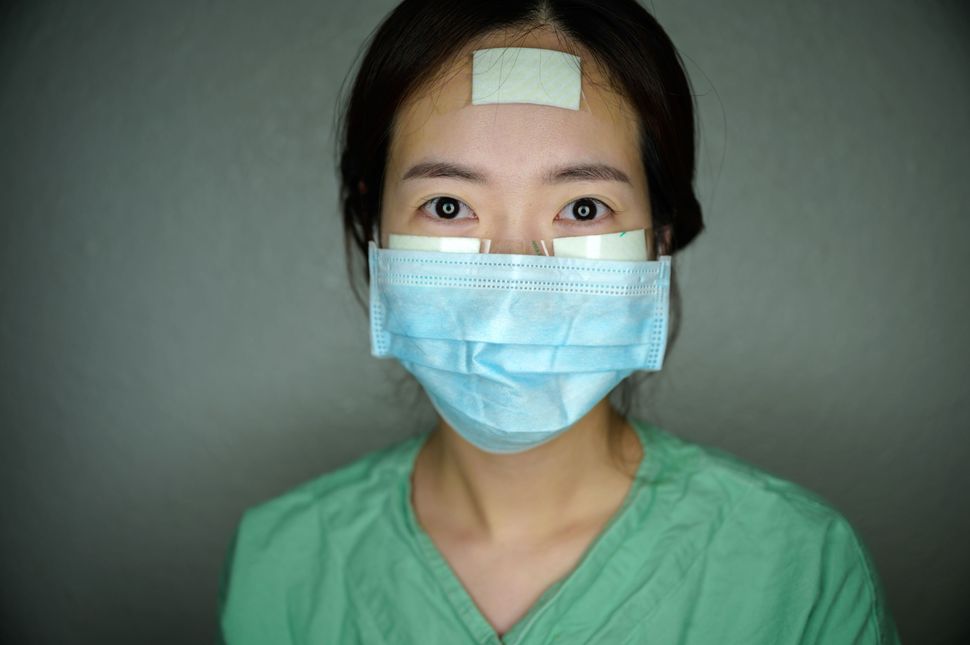 As one of the countries hit the earliest by the coronavirus, South Korea witnessed a spike in COVID-19 cases in the spring. As much as the government was prepared, the virus hit hard and fast. Most citizens feared the worst. There was a sense of panic.

Nurses on the front lines spent hours and hours caring for their patients.

But they desperately needed to find a way to shield themselves from the painful sores that develop from wearing several layers of protective gear.

The nurses applied pads, plasters and tape to their foreheads, cheeks and noses and wore them as badges of honor.

The images were encouraging, powerful and symbolic. South Korea was able to avoid the worst of the pandemic, and there is no doubt that everyone of those who stood on the front line played a pivotal role in that.

When nurse Yun Na-yong (pictured above) posed for a photo during a break between shifts at Keimyung University hospital in Daegu on March 12, she was asked if she had a message to give.

Applause, anger and anguish: Spain’s year on the balcony 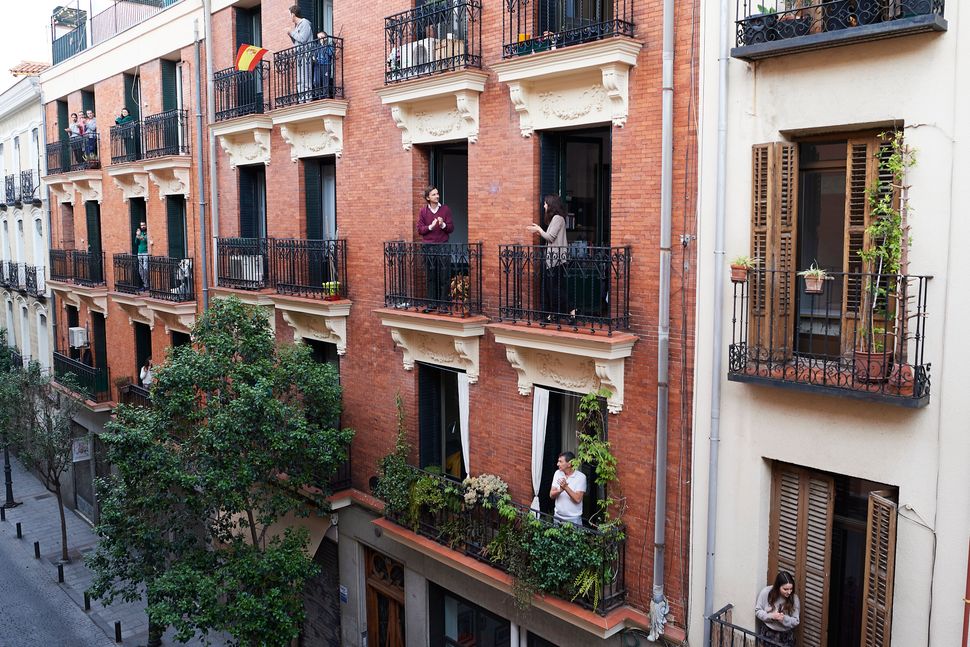 COVID-19 placed Spain at the center of the world’s attention.

The noise of what was happening around the globe contrasted with the silence inside the country: During the 100 days of confinement in the first wave, the voices of people outside disappeared, along with the sound of footsteps and life as we knew it.

It was a silence that, inexorably, broke at 8 o’clock in the evening, when Spaniards came out to applaud from their balconies to thank health care workers for their efforts. It was a gesture of solidarity, but above all, it was a need to see other people, to know that there was life outside of our homes.

But the increase in coronavirus deaths turned appreciation for front-line workers into rage against the government, and cheers were replaced with the sound of clanging pots and pans in protest. The country was split in two — gratitude for front-line workers mixed with anger and anguish in a year that left almost 50,000 dead and 1.8 million infected. Only the pain of relatives who could not say goodbye to their loved ones was greater. 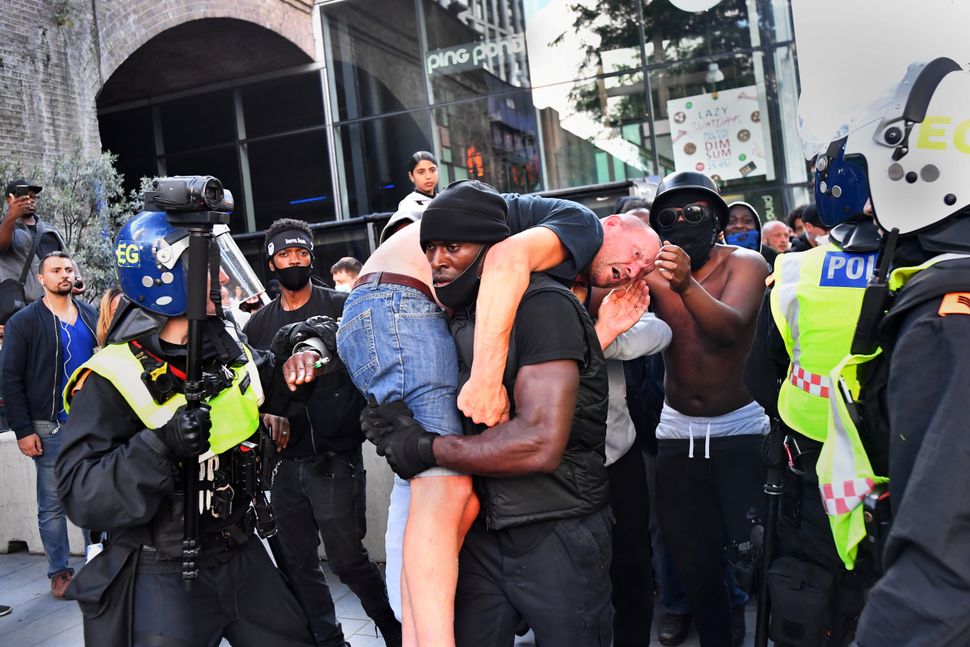 In June, Patrick Hutchinson, an activist and supporter of the Black Lives Matter movement, carried far-right counterprotester Bryn Male to safety during a heated moment at a BLM march in central London.

The image was captured by Reuters news agency photographer Dylan Martinez and quickly went viral, with many hailing Hutchinson as a “hero.”

The media zeroed in on the photo — it was splashed across global newspaper front pages, and it popped up on billboards across the capital.

“It wasn’t just about saving a life. It was also about saving a narrative — and stopping it being derailed with something as negative as maybe someone dying, for example,” Hutchinson said during a candid interview with HuffPost U.K.

But some people took exception to the popularity of the image, arguing that the politics of respectability and the idea that Black people must respond with kindness when faced with racism or violence does nothing to protect Black people themselves. 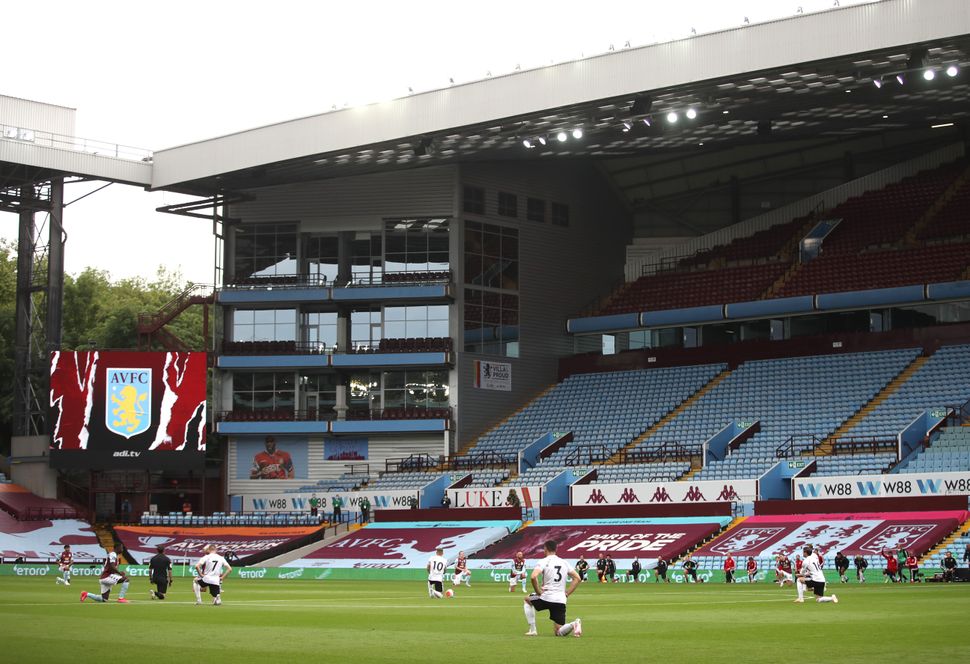 The stands may have been empty at Birmingham’s Villa Park stadium, but the country of England was full of pride as players and officials dropped to one knee on June 17, before the first Premier League football match in Britain since March.

Referee Michael Oliver blew the whistle for kickoff before he and his officials joined the players in kneeling for around 10 seconds in support of the Black Lives Matter movement.

As the scene unfolded, Sky Sports commentator Rob Hawthorne captured the moment: “Look at this.”

“A powerful image to show football’s social conscience as all of the players take the knee,” he said. “The referee did as well.”

The match between Aston Villa and Sheffield United ended 0-0 and was played without fans present. However, the scene of players taking the knee has since played out at every Premier League game since. 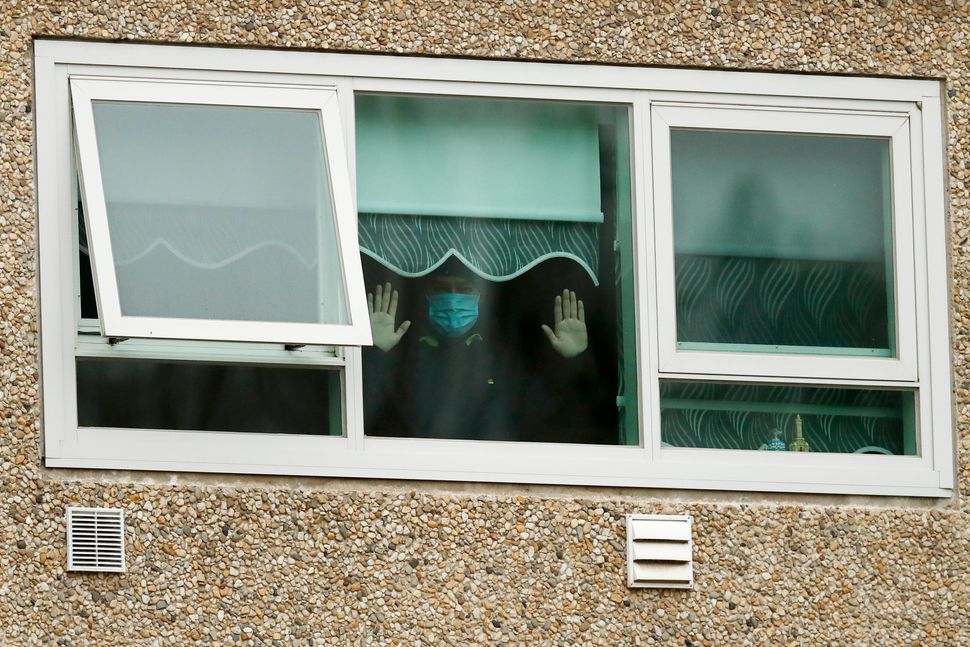 One of the 3,000 residents trapped in nine lockdown tower blocks in Melbourne, Australia, stared out the window and pressed his hands against the glass.

The draconian lockdown in Australia’s second-largest city highlighted the way in which COVID-19 outbreaks among the most vulnerable in 2020 have been met by a heavy-handed government response.

“I looked outside from my window and no nurses, no cleaners, no food — just lots of cops,” Emel Evcin, a 42-year-old mother of two, said by phone from her two-bedroom flat. “This is not a lockdown, this is a lockup.”

Days earlier, without warning, more than 500 armed police officers surrounded the towers and placed them under “hard lockdown” after a number of residents tested positive for the coronavirus.

Residents spent six weeks locked in their homes, unable to leave, reliant on food packages, with two police officers monitoring every floor of each tower.

A river between us 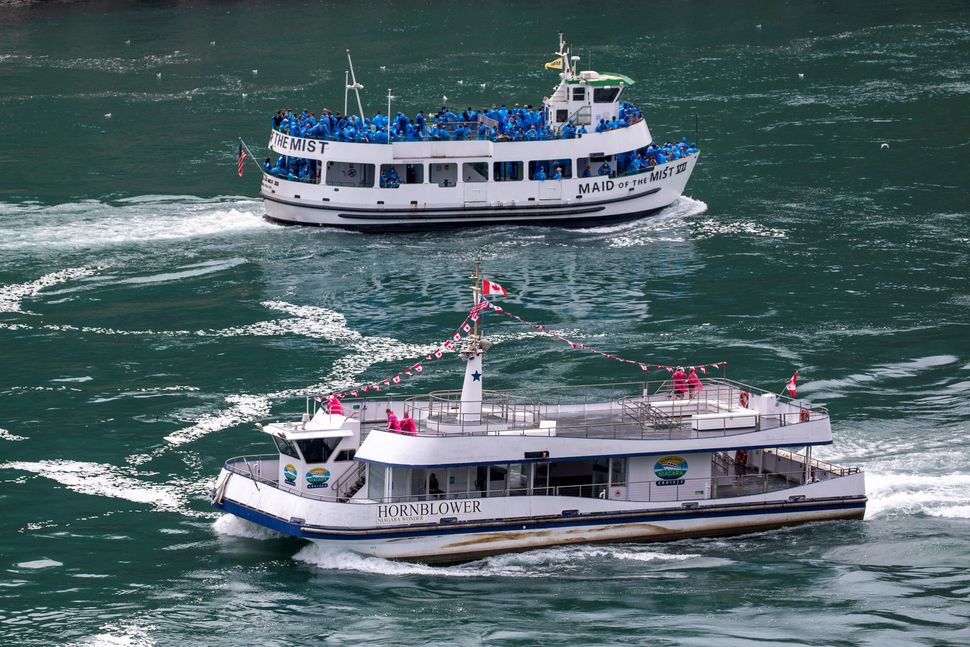 This photo, taken by Reuters photographer Carlos Osorio in July, went viral because it sums up the tension between Canada and the United States during the COVID-19 pandemic.

The image shows two ships from the iconic Maid of the Mist boat tour at Niagara Falls. The background features an American tourist boat with passengers in blue rain ponchos operating at a limited capacity of 50% under New York state rules. It glides past a Canadian vessel limited with just six passengers, due to Ontario’s provincial regulations.

While the world’s longest undefended border may have been closed, the photo of the two boats provides a glimpse at the two countries’ different approaches to the fight against the coronavirus. 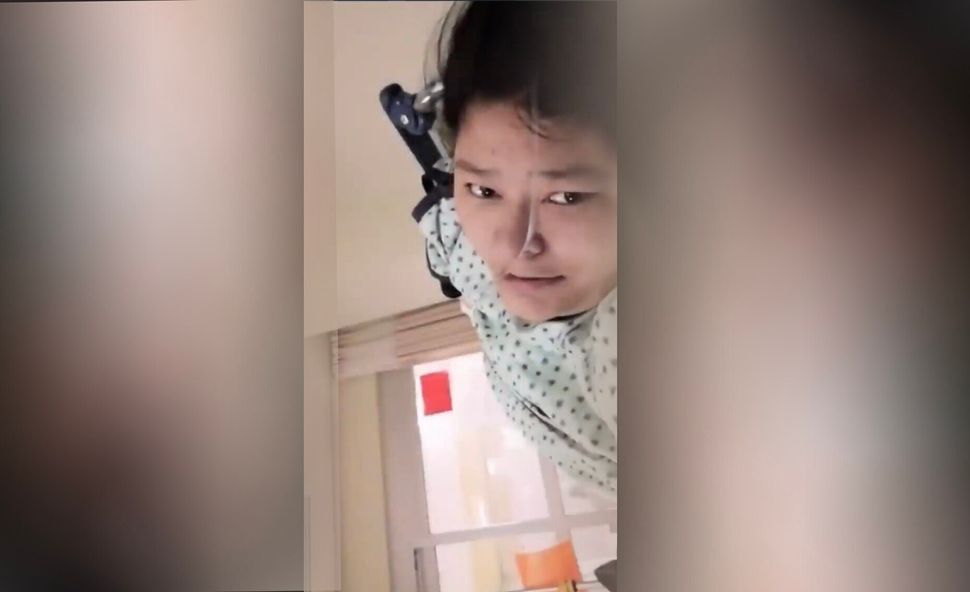 The death of an Atikamekw woman who livestreamed hospital workers’ racist insults during the last moments of her life sparked a racial reckoning in Quebec, with some calling Joyce Echaquan the Canadian province’s “own George Floyd.”

The 37-year-old mother of seven died on Sept. 28 in a Joliette hospital, a three-hour drive south from her home in the First Nations reserve of Manawan. Shortly before her death, she posted a live video on Facebook in which she is seen tied to her gurney while two health care workers utter racist slurs.

“You’re dumb as hell,” one staff worker tells her in French. “That’s better dead,” she laters mutters, calling Echaquan “better to fuck than for anything else.” Her death was recorded minutes later.

Joyce’s story spurred calls to end systemic racism in Quebec, and pushed the province to invest $11 million to guarantee the safety of Indigenous people in the health care system. 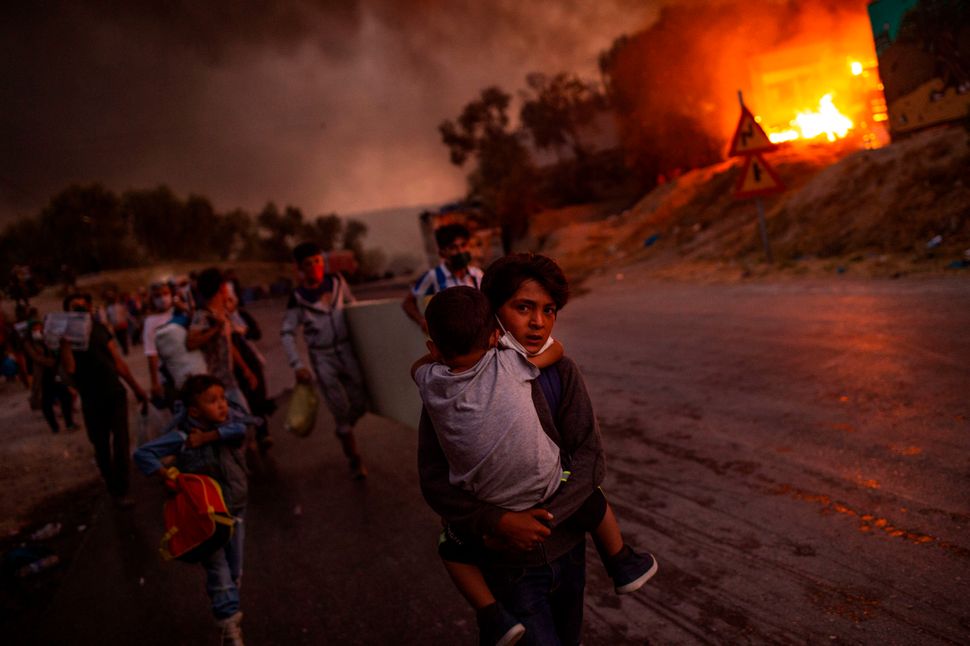 This was the moment a boy carried a child in his arms as migrants fled one of Europe’s largest and most notorious migrant facilities on Sept. 9.

More than 12,000 men, women and children ran in panic out of containers and tents and into adjoining olive groves and fields as the fire destroyed most of the overcrowded, squalid Moria camp on the island of Lesbos.

The camp, built to house around 2,750 people, had long been held up by critics as a symbol of Europe’s failings in immigration policy.

The blaze started just hours after the migration ministry said that 35 people at the camp had tested positive for COVID-19. With the camp at almost 10,000 above capacity, social distancing had become completely impossible. Men, women and children continued to sleep under improvised shelters made of reed stalks, blankets and salvaged tents for days after the fire.

Early voting in New Orleans is 2020 in one photo 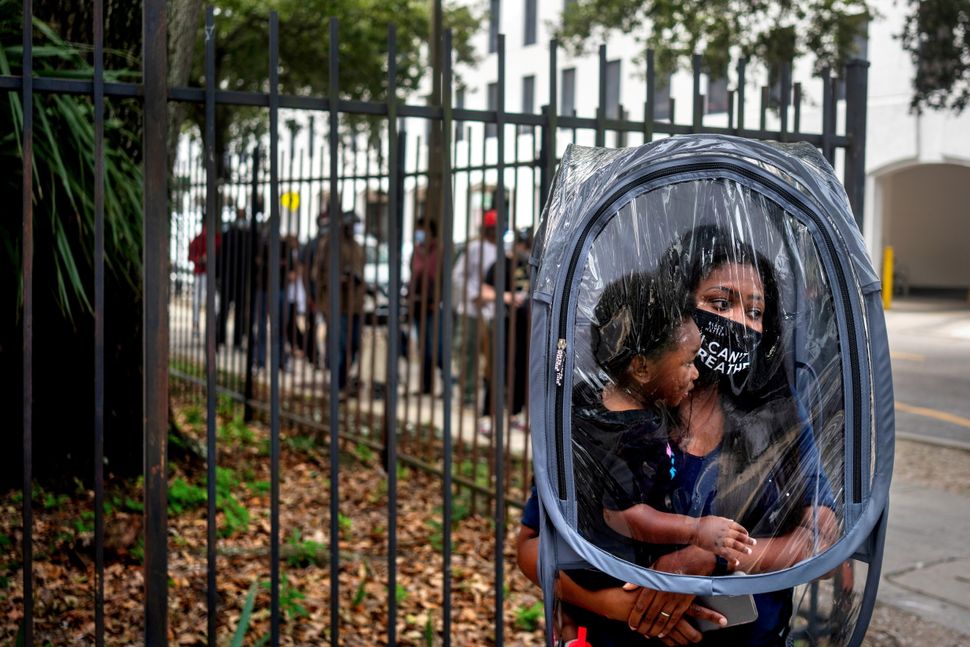 On Oct. 16, Dana Clark and her 18-month-old son, Mason, waited in line at City Hall as early voting began for the U.S. presidential election in New Orleans.

Clark said she donned a protective cover because she didn’t know how many people would be wearing face masks in line, and her child didn’t have a mask. She said she works as a teacher and wanted to take precautions for her students’ sake.

This image went viral, and for good reason. It showed 2020 in a single photo: a chaotic election year with record voter turnout and racial injustice, topped with a pandemic.

When culture dances for survival in France 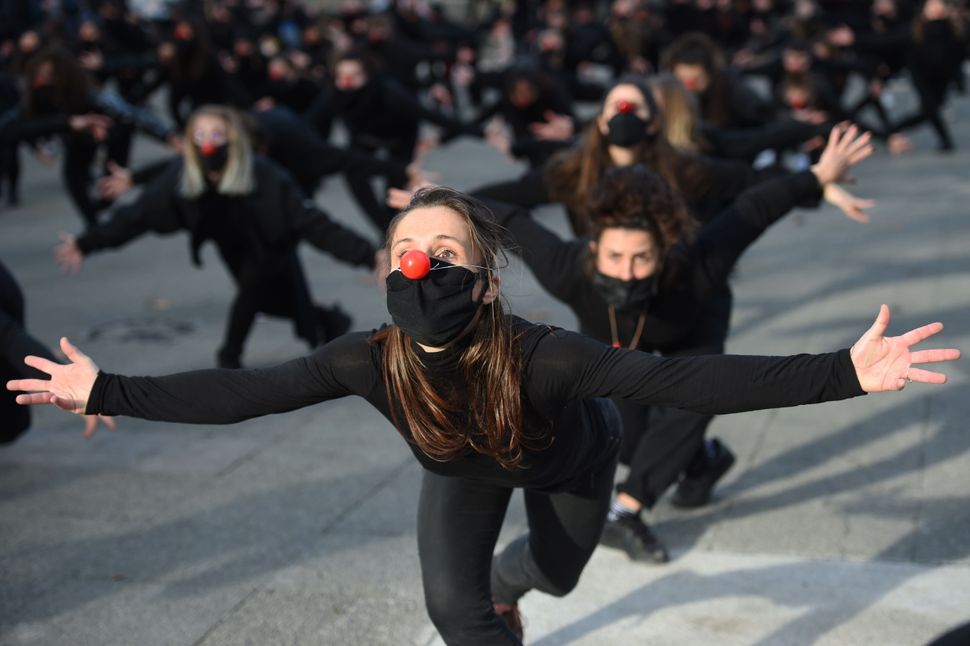 Dressed all in black, with the exception of a red clown nose, 180 dancers performed a silent protest on Dec. 12 against the continued closure of cultural sites in France, including cinemas, theaters and museums.

The group, named “Les Essentiels,” performed a mime representing the killing of culture in a country that is proud of its rich artistic heritage in the southern city of Montpellier.

Along with restaurants and nightclubs, workers in France’s cultural industries are among the victims of the government’s containment measures ordered in a bid to curb the coronavirus epidemic.

Actors, musicians and dancers, all deemed “nonessential” by the French government, feel like they have become the sacrifices of social distancing. They are still unsure whether they will be able to bring their art back to life in January.

The jab that was felt around the world 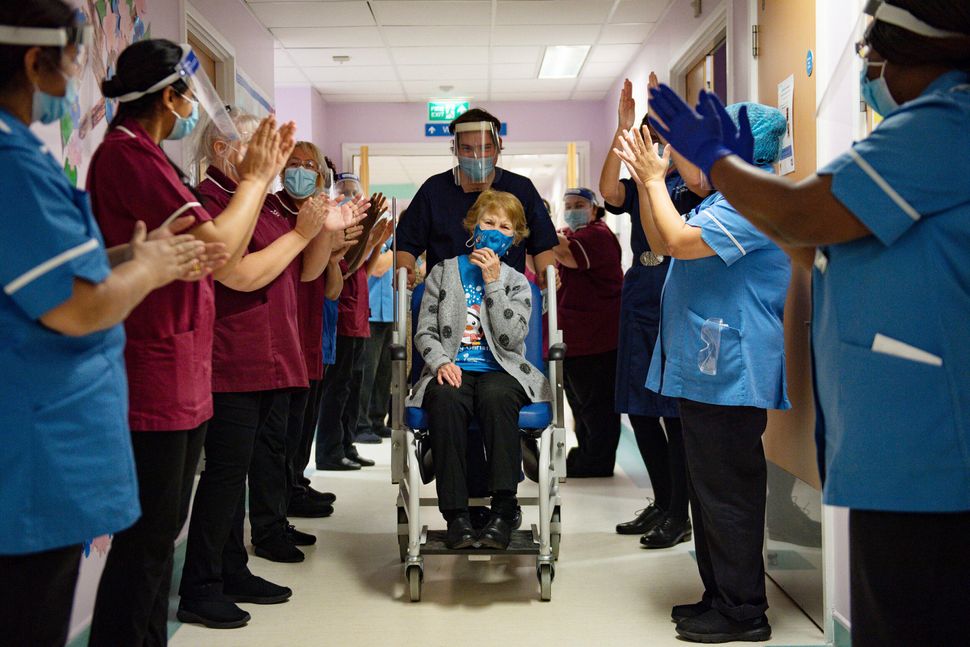 In a split second, it was done.

Shortly before 7 a.m. in Coventry, England, Margaret Keenan became the first person in the world to receive the Pfizer/BioNTech COVID-19 vaccine.

Keenan, who has lived in Coventry for more than 60 years after moving from Enniskillen, Northern Ireland, wore a blue Christmas T-shirt in support of Britain’s National Health Service.

“I feel so privileged to be the first person vaccinated against COVID-19,” Keenan, 90, said. “It’s the best early birthday present I could wish for because it means I can finally look forward to spending time with my family and friends in the new year after being on my own for most of the year.”

Keenan received applause from staff at Coventry Hospital as she was wheeled away to her ward. She was soon followed by William Shakespeare from Warwickshire, who received the vaccine next.

A HuffPost Guide To Coronavirus