Wendy Williams has finally put the rumors to rest: she didn’t pass gas during an episode of her talk show in March. So she says.

Wendy Williams wants to make one thing clear to her fans: “Fartgate” is nothing more than a fairytale. For the uninitiated, “Fartgate” allegedly occurred when the 56-year-old TV icon let out both a burp and a fart simultaneously while discussing Kim Kardasahian during her Hot Topics segment on the March 15 episode of her daytime talk show. Wendy apologized to her audience after the incident, though she never admitted if she really did indeed fart. But on Wednesday, Wendy clarified on SiriusXM’s Andy Cohen Live that she didn’t pass gas in that fateful moment.

“That keeps going around, It’s so disgusting,” Wendy said of the farting rumors to Andy Cohen. “Like, people are so weird with that. I didn’t pass gass.” After Wendy admittedly tried to “deflect” the “Fartgate” conversation by sharing that her show will be back at 100 percent capacity in September following COVID-19 restrictions, the mom of one circled back to the alleged fart and called the rumors “so stupid.” Wendy’s candor about her on-air bodily mishaps (which doesn’t include passing gas, of course) was admirable to Andy, who applauded her for her honesty. And Wendy, honest as always, responded: “I burp all the time, right there on camera. I sneeze and things like that. But, you know what? That’s what people do when they’re having regular conversation. And people are like, ‘You’re an animal.’ ” We’re glad Wendy finally put a cap on that “Fartgate” incident. 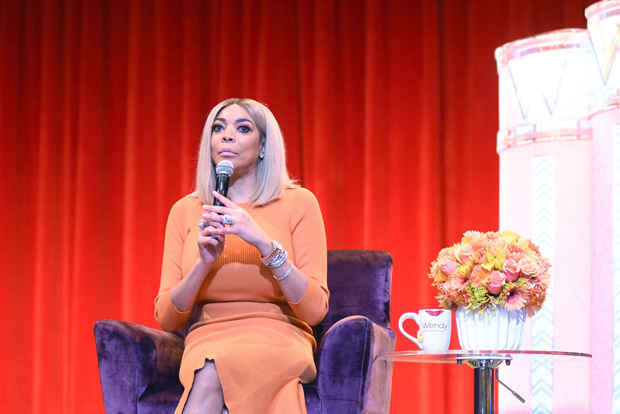 Wendy was understandably embarrassed after she belched and appeared to fart on-air in March. But Stephen Colbert stood in solidarity with his fellow talk show host when he included burping and farting noises into the monologue of his own show on March 17. “Being a talk show host is a brotherhood and a sisterhood,” Stephen said, before he revisited Wendy’s whole incident and played the clip to give viewers a refresher on what exactly went down. Stephen also reprimanded Wendy for even apologizing about the accident right after it happened. “Don’t you dare apologize, Wendy!” he said on his show. “Wendy was slinging such hot gos, her G.I. tract had to chime in and dish. Also, why not let ’em rip! No one cares. Everyone’s already wearing a mask out there.”

This whole did she or didn’t she fart situation was not the first time that Wendy was accused of passing gas on-air. Fans thought she let out a slight toot on her show back in Jan. 2020, but Wendy shut down the speculation. “I’ve never farted once on this show,” she insisted. “I barely fart. You know why? Because gas gets released several different ways, and mine is belching because all I do is talk.” If we had to guess, this may not be the last time Wendy has to address a bodily mishap on her show.

Tags: Wendy Williams
You may also like
Celebrities News