Hoda Kotb and Jenna Bush Hager had a lot to celebrate on the latest installment of Today with Hoda and Jenna with a former co-star.

They were joined by Kathie Lee Gifford as she Facetimed into the show soon after she announced the birth of her grandson.

As soon as she appeared, Hoda began enthusiastically applauding, then saying: “Tell us everything!”

Kathie then revealed that her daughter-in-law Erika’s water broke three weeks early and none of the extended family members were with her except for her husband, Kathie’s son Cody.

“That baby came just when god wanted it to. Erika was a rockstar, Cody never left her side. Had he cooked for three more weeks, that child would have been like a twelve-pound turkey,” she said.

The former NBC star also revealed that they didn’t know the sex of the child till after he was born, sharing that she was going to visit them as soon as she could.

“Is there a greater miracle in the entire world than the birth of a child,” she emotionally added, also adding that she wanted her grandson to call her “Bubbie.”

“My heart is bursting. Frank Michael Gifford is here, confirming that our God is good and merciful and faithful. And he loves us!” Kathie wrote with a picture of Erika and Cody in the delivery room.

She told Hoda and Jenna that the baby’s name, Frank, in honor of her late husband, was a surprise to her.

“I guess, [Cody] never got over, and he never will, the loss of his dad at an early age,” Kathie added. “He was his hero and still is.” 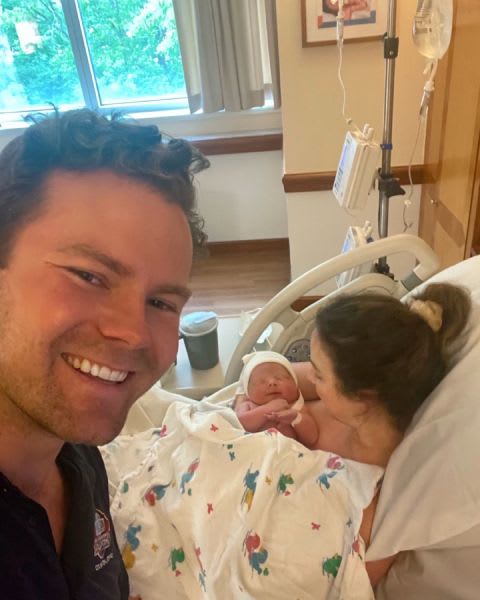 Cody’s son was named in honor of his late father

Many fans congratulated the Gifford family as well and loved seeing the Today hosts’ sweet reactions to the news, especially Hoda’s excited response to seeing Kathie.