Warning: this story contains spoilers for episodes 1 and 2 of Devs.

Walking through the woods with Forrest (Nick Offerman), Sergei (Karl Glasman) ponders “Devs,” a secret development arm contained within the tech company he works for, Amaya. What is “Devs”? Forrest asks the young programmer. “I got a feeling it’s not a progression of our quantum system,” Sergei answers. (“Our quantum system” is apparently the basic technology of Amaya.) He goes on: “The system works as well as it can. So I assume it’s an application of the system. But I doubt that it’s doubling up with any of the other Amaya divisions. So, not AI. Not encryption. Not search engine.”

He goes on to guess national security, biotech, and cold fusion. But these are also incorrect. Then Forrest walks him to a field and a large facility, one that houses labs inside an “unbroken vacuum seal.” And then the two characters enter “Devs.”

So what is Devs, anyway?

From Sergei’s computer, Devs looks like code. Sergei asks whether the code is real or simply theoretical. He’s told that the code is real. It has been run, affirmed. “If this is true, it literally changes everything,” he says. Another Devs employee, Katie, answers: “No, if it’s true, it changes absolutely nothing.”

Later, in episode 2, we see the tests Katie mentioned to Sergei. We see Jesus Christ on the cross in what appears to be a simulation. This is “Devs” at work. 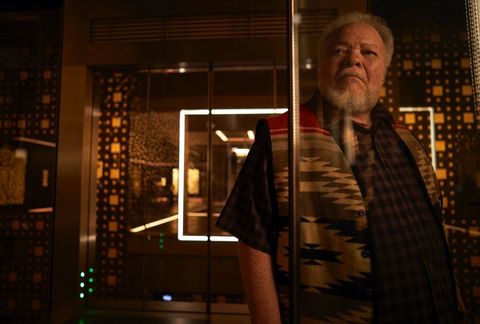 Stewart (Stephen McKinley Henderson) proclaims that this test is a “miracle,” to which Forrest disagrees, implying the tests are not yet one hundred percent accurate, with no variance. “Devs” isn’t yet complete.

What is Devs doing? It appears to be recreating past events merely through code. How is it doing this? We’re not quite sure.

Fleeing back through the woods, Sergei is then confronted. And Forrest explains the attitude behind Devs:

This is monologue likely holds the key to understanding Devs.

Forrest has articulated something called “causal determinism,” the theory that all events in the physical universe, itself based on natural laws, are determined by definite causes. Nothing is uncaused. And if causal determinism exists, then it explains not just physics but (in some formulations) also all actions and decisions, themselves effects of causes within the brain, a natural thing existent in a natural world.

Now, if all causes could somehow be known, it would follow that all possible effects can be known as well—given that these effects must necessarily proceed from these causes. Therefore, simply by analyzing the way things are, we can theoretically determine what caused them (the past) and what effects they will cause (the future). Again not just for physics. These effects would include actions and decisions.

And so we find Sergei in the woods with Forrest. Forrest tells Sergei that he did not chose to betray him. Forrest knew he would. How? Devs.

Devs appears to be an extension of the very program Sergei was running at the beginning of episode one, when he predicted the movement of a simple organism. Devs takes in data about causes and effects and somehow maps this data backwards (showing Christ) and forwards (showing Forrest Sergei’s betrayal).

Why would the code “change nothing” as Katie suggests? Because if the universe really is deterministic, then there’s no way to alter what the code shows. Everything has been set. Everything, as Forrest puts, exists on tram lines.

So the question now isn’t just how Devs is able to calculate this. The question becomes: what will Devs do with this data?