Simone Biles just made a huge decision after a very difficult time competing in the Tokyo Olympics. The gymnast’s time in Japan has pretty much dominated the headlines after she pulled out of multiple events to focus on her mental health. Biles first announced that she had made the decision to pull out of the women’s team event, before it was also confirmed that she had decided not to compete in the vault, bars and floor routines (via CBS Sports).

Biles explained her decision to take a step back in a series of Instagram Stories posted in late July, in which she shared she’d been experiencing the “twisties” (via NBC News). The term is familiar to gymnasts and gymnastics fans and means the athlete can lose track of spacial awareness during their routine, putting them at greater risk of injury.

Biles explained that the phenomenon “randomly started happening” as she practiced in Tokyo and meant that she “literally can not tell up from down.” She added, “I didn’t quit, my mind and body are simply not in sync” and pointed out that she doesn’t need to explain her decision to “put health first” by stepping back from the competition, noting, “physical health is mental health.”

But despite her struggles, a major revelation about Biles’ future with the Olympic Games was just revealed. Read on for all the details. 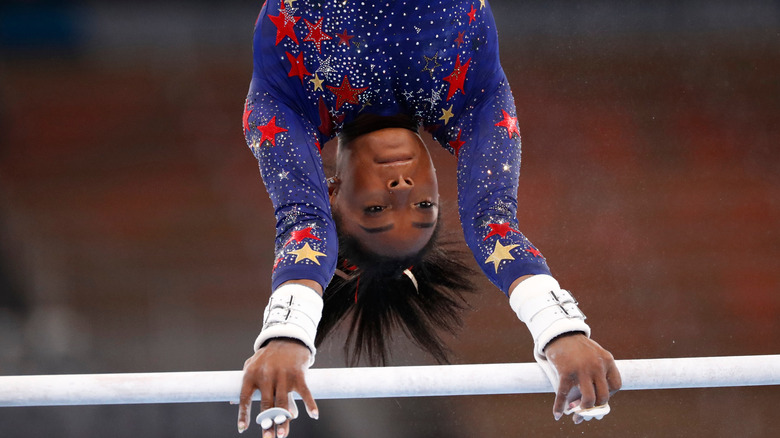 Thankfully, it seems Simone Biles is doing better and is ready to prove once again why she really is the G.O.A.T. It was officially confirmed on August 2 that Biles will compete on the beam on August 3 after her tough bout of the “twisties.”

USA Gymnastics confirmed the big news on Twitter, writing, “We are so excited to confirm that you will see two U.S. athletes in the balance beam final tomorrow – Suni Lee AND Simone Biles!! Can’t wait to watch you both!” Biles’ return to the competition will happen a week after she announced her exit from the team all-around segment.

Alongside Suni Lee, Jordan Chiles, and Grace McCallum, Biles earned herself a silver medal in the team all-around and she shared a whole lot of praise for her teammates on Instagram on July 27. Posting a photo of them holding up the new additions to their trophy cabinets, Biles wrote, “I’ll forever be inspired by your determination to not give up and to fight through adversity! They stepped up when I couldn’t. thanks for being there for me and having my back!”

It’s not yet known if Biles will continue on with her Olympics journey at the 2024 Olympics in Paris, but if the superstar does decide to retire — as fans speculated she could before the current games — this could mark her last chance to stand on the winner’s podium at the world renowned competition.

Tags: A, Big, Biles, Decis, makes, Simone
You may also like
Celebrities News