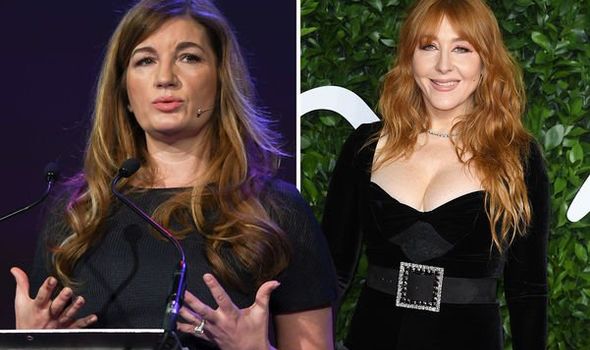 Make-up mogul Charlotte Tilbury has said she has a “bedroom eye” make-up routine to ensure her husband George never sees her without makeup on. The 48-year-old revealed she followed her self protocol in order to “keep the magic alive”.

Speaking to the Daily Mail, she spilled: “I take off my makeup, do my skincare, then I put on my Colour Theory eye liner that lasts 16 hours and my mascara.

“George has never seen me without my bedroom eye. Never! I tell you, keep the magic alive.”

Karren Brady, 52, has said she was “shocked” to hear Charlotte’s admission.

In her column with The Sun, the business executive wrote: “Seriously? This seems like a very outdated attitude to me.

“Although luckily for me, my husband prefers me without make-up on, which means I get to wear it when I want to – not for my husband or for anyone else.”

Lord Sugar’s The Apprentice sidekick has been married to husband Paul Peschisolido since 1995.

The couple share two children together; Sophia and Paolo.

In 2018, Karren shared her thoughts on women who claim they have it all.

She said on Loose Women: “I think anyone who thinks they can have it all, particularly any woman, out of all the titles I’ve got, a working mother is the one the only one that really suits me.

“I’ve been there when you have to attend all meetings, sports day, parents evening.

“It’s a balancing act that you spend your whole life juggling.”

Karren went on to say that children seeing their mums work sets a good example.

“It’s not about the person who drops them to school every morning or picks them up because you can’t,” she added.

The businesswoman said there had been times where her children asked why she was absent from some parts in their life, due to her hectic schedule.

“I haven’t always got it right,” she continued. “But, I’ve done my very best.”

Karren is best known as the former managing director of Birmingham City F.C. and current vice-chairman of West Ham United.

She is also aide to Alan Sugar on The Apprentice.