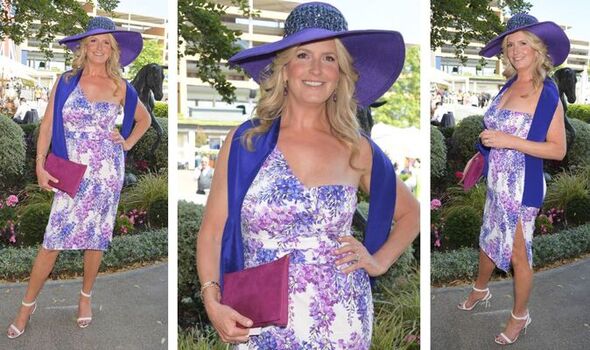 Former model Penny Lancaster, 51, flashed a broad grin for the cameras today as she mixed blue and purple hues for a sensational Ascot 2022 outfit.

Her one-shoulder white dress featured a blue and lilac floral pattern, which she paired with a blue cape and a statement purple hat.

Meanwhile, she kept the accessories simple with a pair of white heels in a peep-toe design, which allowed her to flash her bright blue nails.

Despite the royal colour shades in her outfit, husband Sir Rod – who was not with her on the day due to his worldwide tour commitments – recently suffered an embarrassing moment at the Queen’s Platinum Jubilee concert.

He performed an explosive rendition of Neil Diamond track ‘Sweet Caroline’ for Party at the Palace, but it evoked a mixed reaction among fans, some of whom dubbed him a “drunk uncle at a wedding”.

It also sparked a war of words between him and Elvis Costello on Twitter, after the song choice was branded “s**t”.

Penny Lancaster wows in royal hues of blue and purple

Former model Penny Lancaster had no trouble demonstrating a selection of perfectly poised poses for the cameras today, clutching the brim of her hat while preparing for the action to kick off at Ascot

Penny Lancaster at an ABBA event

Penny Lancaster in another sensational outfit

Penny Lancaster and Rod Stewart enjoy a PDA in the car

Rod Stewart might not have been with Penny Lancaster today at Ascot, but when they are together, they often seem to have a fun night out, as this PDA demonstrates