Kate Middleton put on a radiant display as she got stuck in singing hymns during the service of thanksgiving at St Paul’s Cathedral on Friday.

Wearing a stunning, sunshine yellow dress by Emilia Wickstead, the royal appeared in high spirits as she sung alongside her husband, Prince William.

The mum-of-three looked dazzling in her bright outfit which she teamed with a matching yellow hat, elegant drop earrings and nude high heels.

MORE: Meghan Markle is a vision in all-white look at the Queen’s Service of Thanksgiving

The royal duo attended the service in central London which paid tribute to the Queen’s 70-year-reign. The sermon was led by the Archbishop of York Rev Stephen Cottrell who was forced to step in after the Archbishop of Canterbury had to pull out due to COVID-19.

The Platinum Jubilee celebrations kicked off on Thursday with Trooping the Colour which saw the Cambridge family make an appearance on the Buckingham Palace balcony alongside The Queen. 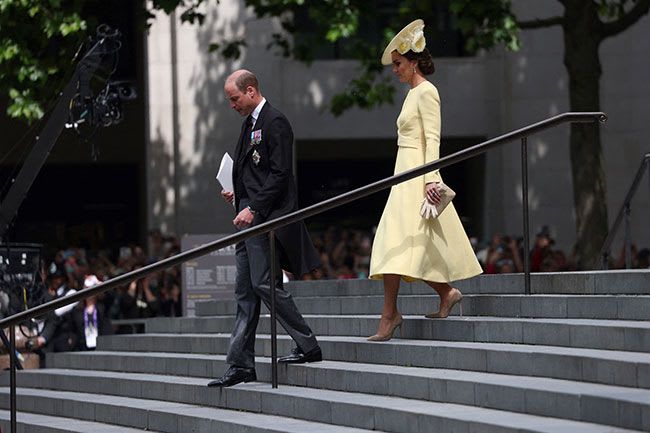 The Duchess of Cambridge turned heads in her sunshine yellow outfit

Making their carriage debut, the Cambridge children travelled together in a carriage pulled by horses from the Royal Mews. The youngsters were accompanied by their mother Kate, and the Duchess of Cornwall.

Royal fans were delighted by the trio as they waved enthusiastically in their matching blue outfits. Prince Louis nearly stole the show with his exuberant waving, but in a sweet brother-sister moment, Princess Charlotte was quick to stop him in his tracks.

The festivities are set to continue over the weekend with the BBC’s Party at the Palace taking place on Saturday, followed by a triumphant pageant through the streets of London on Sunday. Spectators can expect giant puppets, marching bands, circus acts and the Queen’s gold state coach.