Kamala Harris’ niece Meena brought some levity to Trump’s second impeachment, by using a pun on the word to offer the incoming vice president some tasty ‘impeach-mints’ in a funny video.

With Donald Trump making history for getting impeached for the second time during his presidency, Vice President-elect Kamala Harris got a good laugh out of it via her lawyer/children’s book author Meena Harris. The 35-year-old posted a TikTok video that she later shared to her Instagram account on Jan. 13 mocking Trump’s predicament, where she held out a bottle of peach colored mints towards the 56-year-old incoming vice president.

“Auntie. Auntie I got you a gift,” she could be heard telling Harris, who was seated and wearing a smart peach-colored suit. The future Veep looked relaxed, wearing white ankle socks and looked up quizzically at Meena as she held out the bottle. The women’s rights activist told Harris the treats inside were “impeach-mints.” Kamala broke out in a hysterical laugh that was absolutely adorable. Meena captioned the video, “happy impeachment day,” along with a peach emoji.

That same day, the U.S. House of Representatives impeached Trump on one article of “incitement of insurrection” following the January 6 siege on Capitol Hill that left five people dead. House Speaker Nancy Pelosi announced the vote tally afterward as 232 yea, 197 nay. The supporting vote included 10 Republicans who joined in the “yeas,” after they could not ignore how Trump incited supporters to storm the Capitol as the Electoral College votes were being certified to officially declare Joe Biden the winner of the 2020 presidential election. 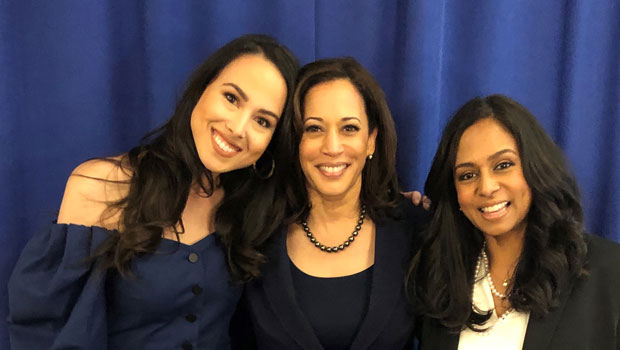 Earlier this week, Meena shared her feelings about her aunt’s new Feb. 2021 Vogue cover, which has caused quite a bit of controversy. Kamala posed in a smart light blue suit that was to be her cover shot, which was what was reportedly approved by Harris’ team. But instead the magazine used it as their “digital” cover and made their magazine cover shot one of Harris in a black jacket and cropped pants, a white t-shirt and her signature Converse Chuck Taylor All-Stars on her feet as the newsstand version. Even the background featured unusually bad styling of wrinkled pink fabric against tacky green wallpaper, which are Kamala’s Howard University sorority colors.

Some Twitter users couldn’t believe the cover was real, claiming it looked so shoddy and unprofessional that she could have been Photoshopped in. Others claimed that the magazine had lightened Harris’ skin color, while many fans said the casual nature of showing the first WOMAN, in addition to first Black and South-Asian, to become V.P. was disrespectful, especially when the much classier blue suit version with a gold background was available and what was reportedly approved by Harris’ team.

“It’s a big moment where we have elected the first woman in history, the first Black woman in history, and South-Asian woman, to hold the office of VP in our country’s history, that is a huge historic moment,” Meena told The Today Show on Jan. 11.  “It deserves the proper celebration of that moment especially for a magazine that often has not had Black women on the cover,” she continued.

“I love the photos of the powder blue suit, I love those and I think that [photographer Tyler Mitchell]’s incredibly talented and of course the woman who wrote the article, it is a lovely inspiring amazing interview,” Meena shared. She added, “I think, again, it’s a big moment and I am glad that Tyler captured images that are deserving of this extraordinary moment.” Tyler took the more causal photo of Kamala that was originally supposed to run inside the magazine with the article and not on the cover.

Tags: kamala harris, Sensitive
You may also like
Celebrities News