When it comes to being a Hot Girl™, few people have the concept down quite like Megan Thee Stallion. It’s not just because she literally has a song devoted to the vibe (hello, "Hot Girl Summer"); the singer/rapper radiates confidence while smashing gender norms in the music industry — and looks fierce while doing it. So, when I saw she did a video teaching others how to pull off her signature ~lewk,~ I couldn’t wait to test it out and channel my own inner Hot Girl. The thing is, when I tried Megan Thee Stallion’s cut crease makeup tutorial, my results were… very different.

Megan kicked off her Aug. 10 YouTube video for Revlon by admitting it’s the first makeup tutorial she’s ever done. The revelation was reassuring; as comfortable as I am with makeup (I love a good costume look or full-glam face), I’d never attempted the technique she was demonstrating in her video: the advanced and elusive cut crease. Used by pros to make eyes appear wider, the crease of the lid is defined by contrasting colors and minimal blending, resulting in a bold eye makeup look. The process seemed daunting, but the result was stunning. I had to give it a shot.

Even though Megan strictly uses Revlon products in her tutorial, I decided to try out her look with whatever products I had on hand. So, I pulled up her hilarious and confidence-boosting video, took a peek into my vanity, and picked out the products I would need to follow her routine step by step.

1. Brown Shadow All Around 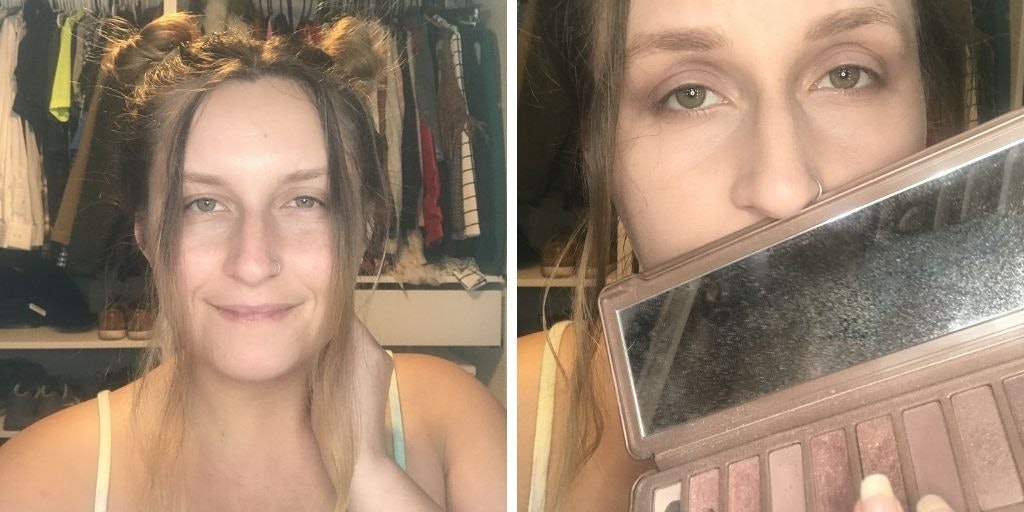 Megan starts the tutorial with her hair in space buns and her face seemingly prepped with foundation (unless her skin is naturally flawless, which, like, I’d also believe). After tossing my hair up in some messy buns and slapping on some foundation and concealer, I started the tutorial with Megan’s first step in her cut crease journey: Apply brown eyeshadow to the crease of the lid and under the bottom lash line.

Since brown shadow is part of my usual makeup routine, I wasn’t too concerned about how this would turn out. I used my old Urban Decay Naked Palette and sipped on some sparkling water, feeling more confident than ever that I would nail this look. 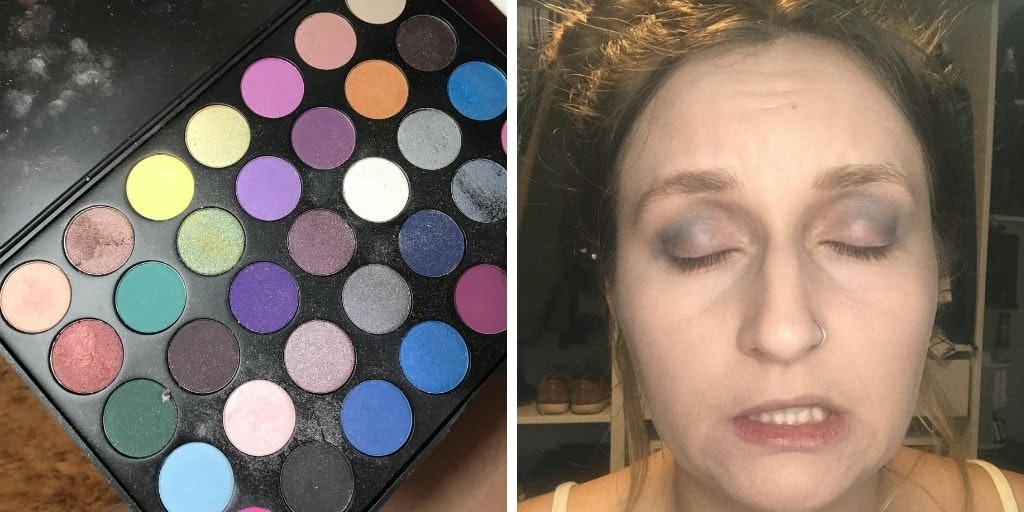 Next, Megan added some blue shadow to her crease. Despite it only being the second step of the tutorial, this is where things started to go badly for me. Maybe I hadn’t prepped my eyelids properly for the pigment, or maybe it was because I was using a cheap costume makeup palette I had ordered on Amazon. Either way, the blue just wasn’t working. Despite my attempts at blending, my eyes looked bruised and painful as opposed to fierce and powerful.

3. Give Yourself A Pep Talk 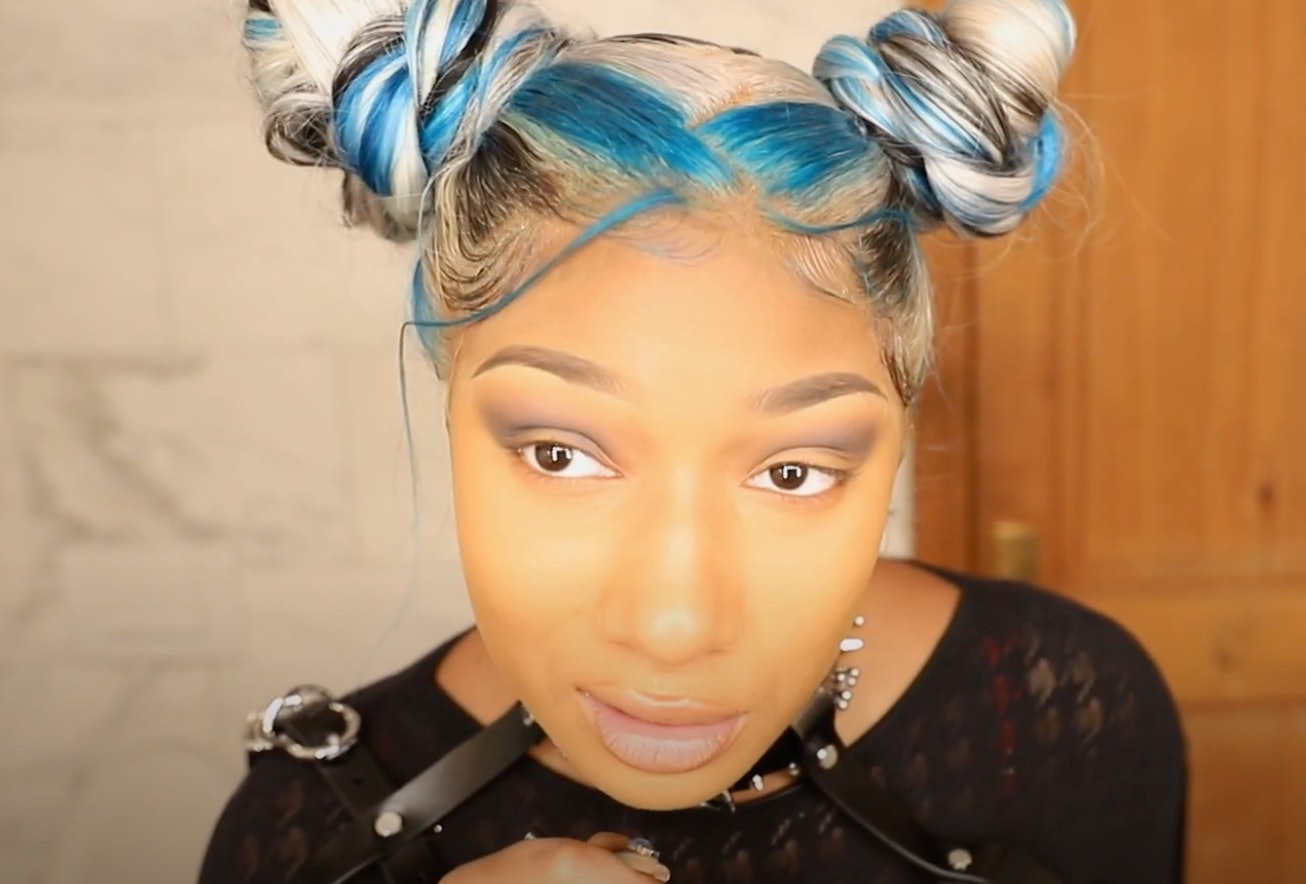 Luckily, the next step in the process was to "give yourself a pep talk," which is exactly what I needed when I compared my look to Megan’s.

Just like the star, I gazed deeply into the mirror and told myself things like "You cute, boo" and "Who’s your makeup artist?" While it didn’t magically make my eyeshadow look more blended, it did give me confidence to pick my brush back up and tackle the next step of the process. 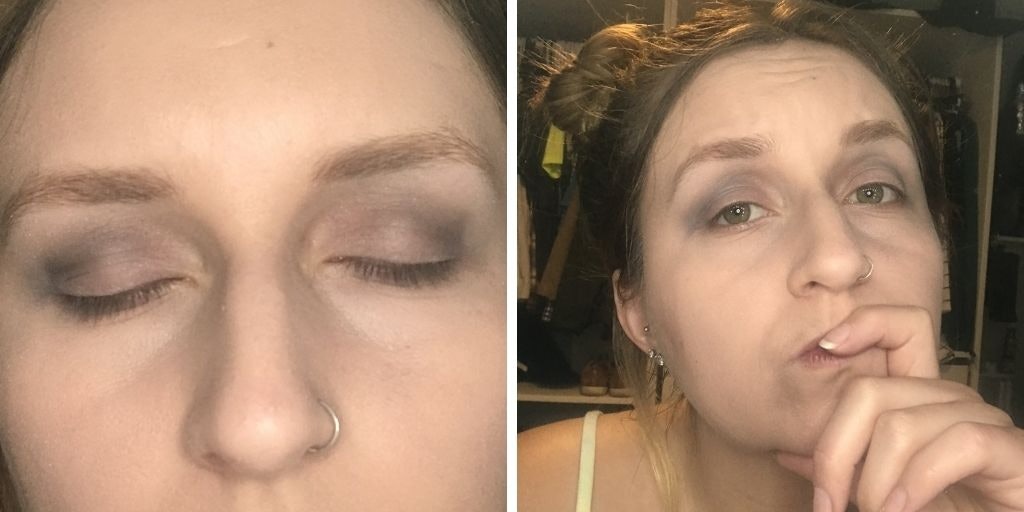 Once I finally felt emotionally prepared to add more shadow to my eyes, I selected my brightest white shade and added some highlight below my brows just like Megan. Usually I do this with my highlighter palette, but since she just used a white shadow, I decided to do the same.

After attempting to blend some more — a crucial step Megan took her time on — I added some dark brown shadow to my crease and lower lash line. While it didn’t look good, I didn’t totally hate how it made my hazel eyes pop. Even though it was pretty messy, I (foolishly) figured I could clean it up at the end.

5. Put Concealer On Your Lids 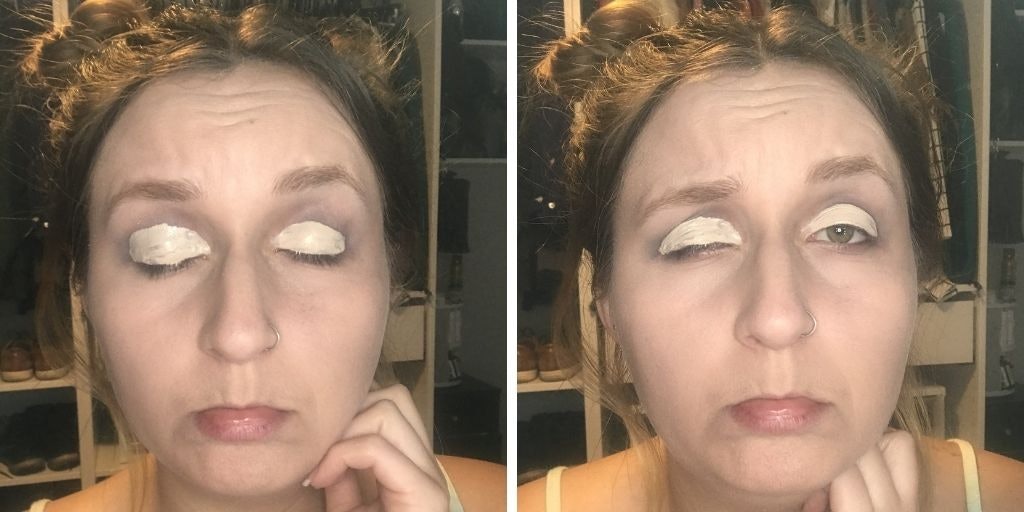 Megan’s next step is where the cut crease really starts to take shape. The singer takes a light-colored concealer to paint the area on the eyelids where a bright color will go. And even though she warned viewers this part was "like surgery" and you needed to have steady hands, I wasn’t ready for how tricky it would be.

Maybe it was my perpetually shaky hands (a result of my excessive caffeine intake) or just my lack of patience, but this crucial step was my ultimate downfall. While Megan said you didn’t need to worry about your eyes looking exactly the same as one another, by the time I was done, it was obvious the two sides of my face would look very, very different — and that neither side would come close to Megan’s look. 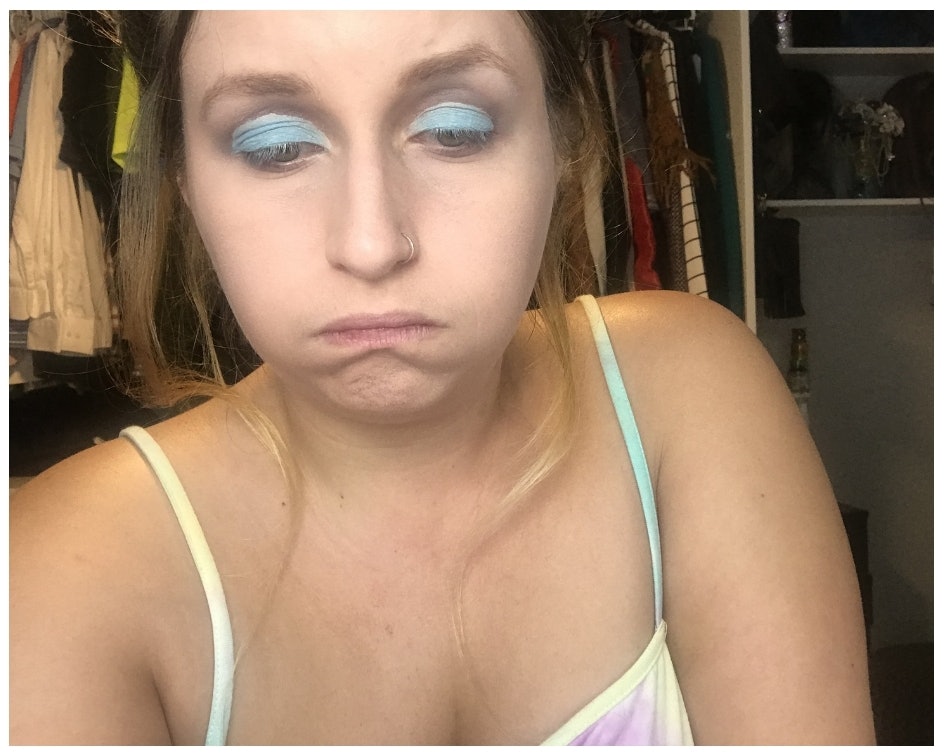 After letting the concealer dry, the next step was to add bright blue to the prepped lids. While I managed to do that without messing up too badly, the light blue shadow made it even more clear how uneven my cut creases were going to be.

My right side was much larger and more jagged, whereas my left was clean but a little too small. I had already spent too much time and makeup to back out at this point, however, so I hastily lined each crease with dark blue shadow and tried to ignore the fact that my lids felt like they were caked in dirt. 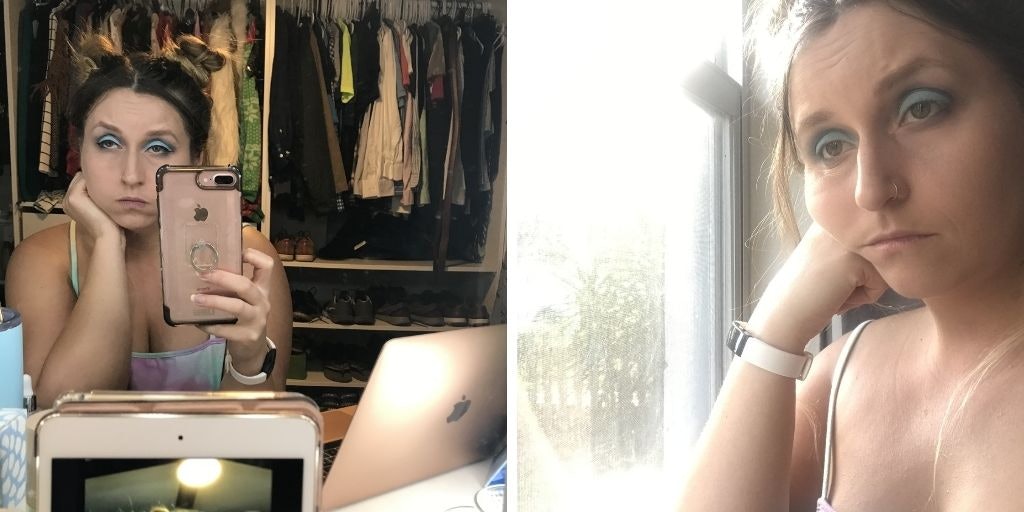 No, this wasn’t part of Megan’s tutorial, but as a fan clumsily attempting to recreate the look, I can wholeheartedly say: It needs to be. Even though I decided to stick with the tutorial through the end, I needed to take a break to ponder my life choices. I looked out the rain-soaked window and tried to avoid my reflection before heading back to my vanity, somewhat discouraged but ready to finish the tutorial once and for all. 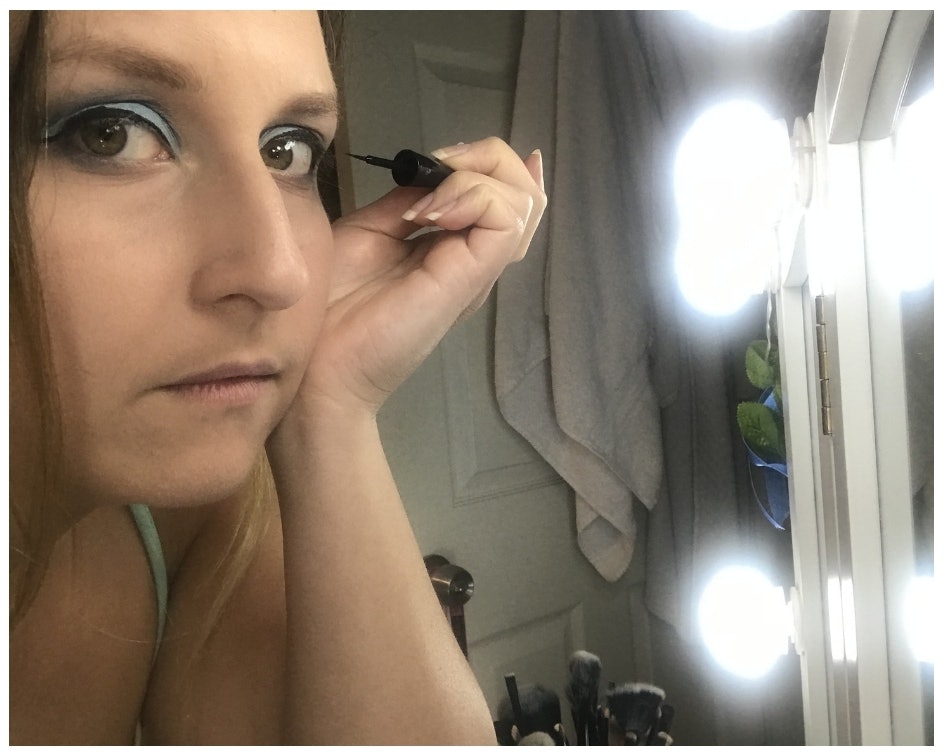 After adding the blue shadow, one of the final steps was a dramatic sweep of eyeliner. While this is part of my usual makeup routine, at this point, I was so emotionally drained by my cut crease attempt, I didn’t have my usual stamina or determination. My hand wobbled and at the exact wrong moment, and I sneezed, causing a huge black smudge to appear on my lid.

Since there were layers of work below the liner, I decided then and there that I would no longer care about that eye and just cover it up for pictures. From that moment on, my right eye was just along for the ride. 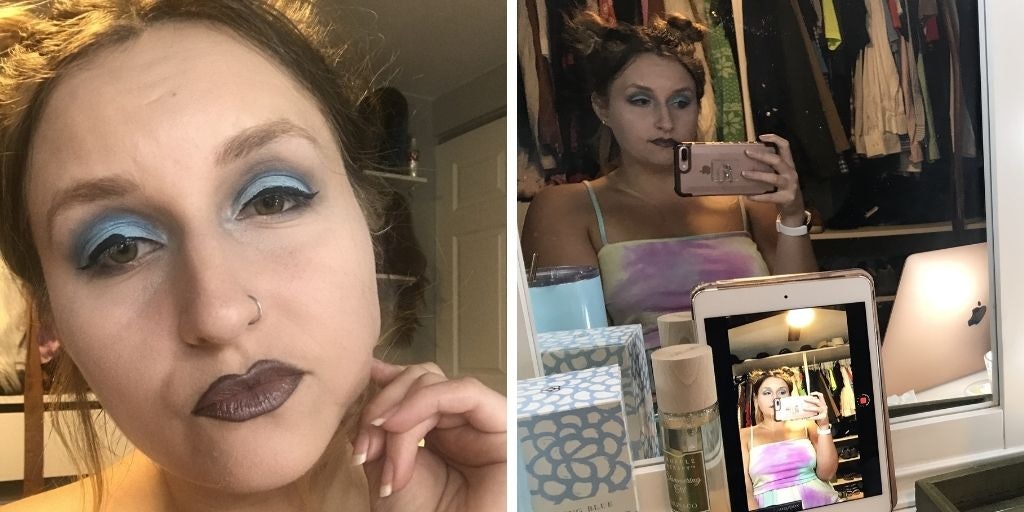 Even though things hadn’t been going great up until this point, something about a bold, sassy lip really turned the situation around. Megan uses about four different lipsticks and glosses to create her defined, brown lip. Since I just had one old gloss and a wide variety of nude lipsticks, I played around until I created something that felt good.

Oddly enough, once the lipstick was on, I felt my confidence returning. Sure, my right eye’s liner was a disaster and yes, it looked like a 4-year-old did my cut crease. But my lips looked good, my hair was cute, and my outfit was trendy, so despite the eye sitch, I started to feel good again. 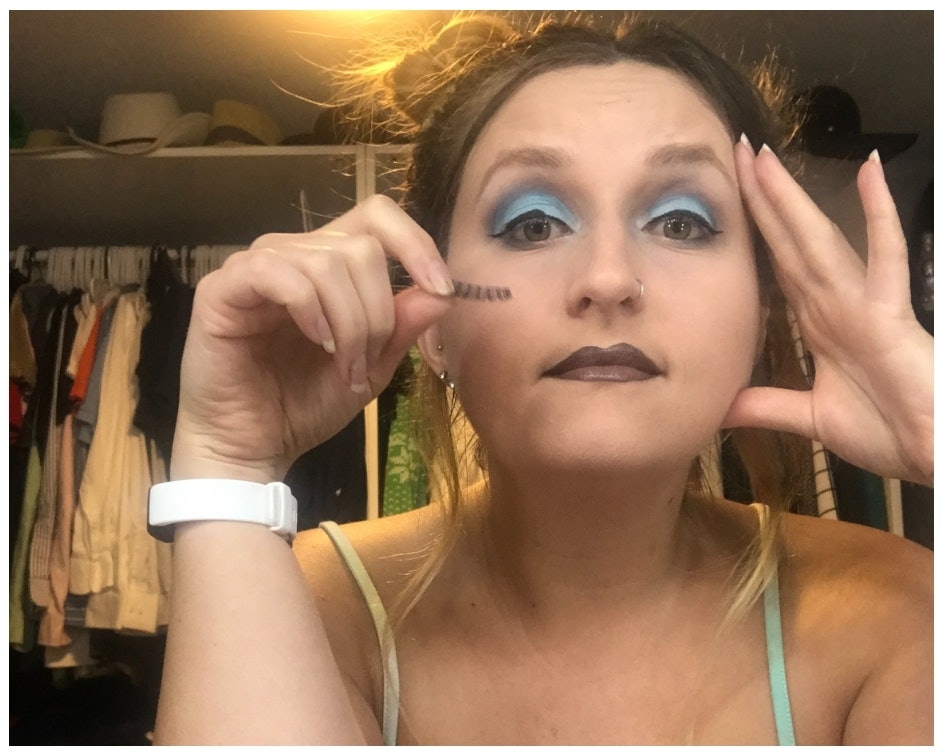 As a firm believer in falsies, I was waiting for the moment when Megan would add them to her look, and luckily, I wasn’t disappointed. Thanks to my competitive dancing days, fake lashes are my go-to when getting glam and I’m a pro at applying them. After putting them on, I felt a little more like myself and a little less like a Disney Channel tween who just got permission to wear makeup for the first time. 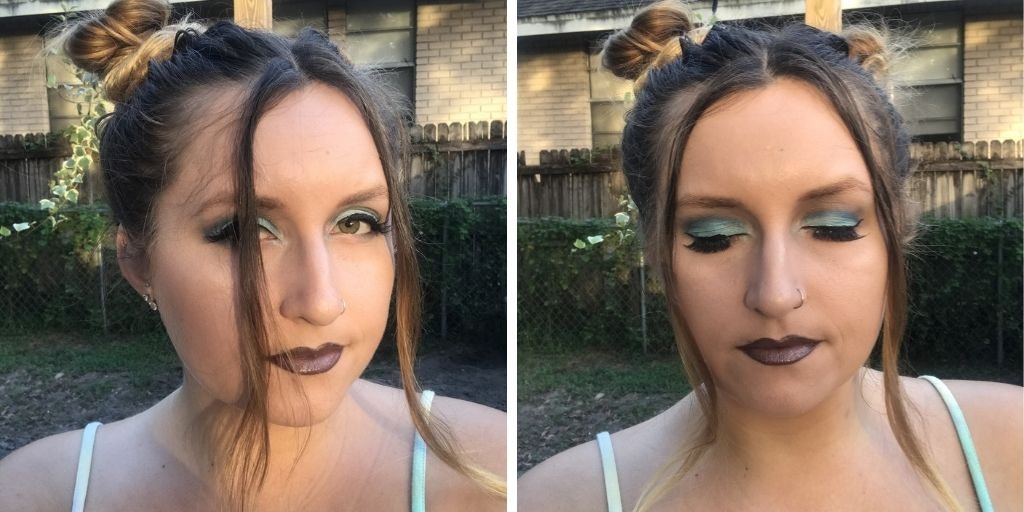 The final step of Megan’s tutorial was adding some highlight, powder, and bronzer to the face. Megan revealed in the video that she doesn’t contour; she just uses bronzer to accentuate her jaw. I actually loved this idea, because it was way easier than a multi-step contour process and it still made my jaw look pretty defined in pictures. 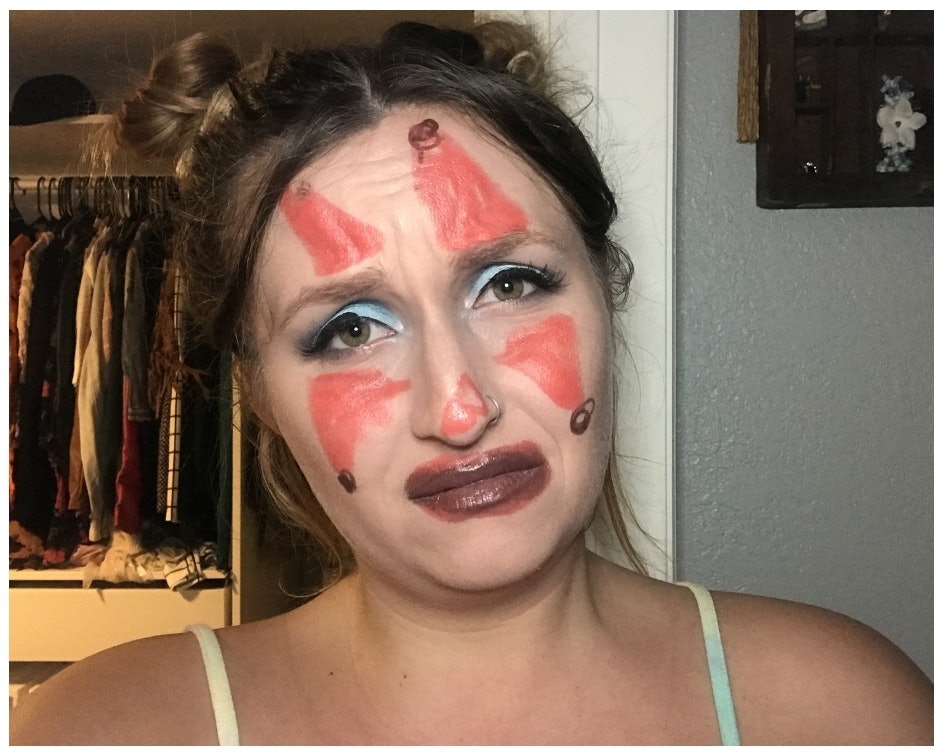 By the time I had finished Megan’s look (which took me about two hours, including my 15-minute pouting break), I was exhausted. My eyelids felt heavy, my skin felt cakey, and the bright blue shadow made me feel more like a circus performer and less like "the baddest b*tch in the club," as Megan suggested.

While there were some aspects I liked — such as adding a bold lip and using bronzer instead of contouring — the actual cut crease did not work for me. Like, at all. By the time I was done, I felt like a clown meme with mismatched, bright blue shadow and bold, attention-grabbing lips. So, before going through my entire packet of makeup remover wipes, I added some red lipstick marks to my face and paused for a selfie, because the joke was on me for thinking I could create such an advanced makeup look.

It turns out, even though Megan Thee Stallion makes being a Hot Girl look effortless, it’s actually really hard to perfect her glam. I think from now on, I’ll stick to my usual routine and maybe add an extra pop of lip color if I need to feel edgy. The blue shadow, however, will officially be retired from my vanity.

In Elite Daily’s I Tried series, we put celebrities’ favorite products, recipes, and routines to the test to show you what living like your fave star is really like. Read more here.