Across eight seasons, Dance Moms was one of the biggest reality shows of the 2010s, resulting in some of the most iconic and unforgettable moments in television history. It also helped launch the careers of famous teenage celebrities like Maddie and Kenzie Ziegler and JoJo Siwa. Over the course of the series, which ran from 2011 to 2019, fans saw the girls become stars with the help of their infamous dance coach, Abby Lee Miller, who was known for going a bit (read: very) overboard with her teaching methods. Because of this, Abby often clashed with the girls’ mothers, and their bickering made for some really entertaining TV. When the dancers moved on to pursue solo projects, the drama didn’t stop there. In fact, it only got more intense as their feuds went beyond just dancing. To give you a recap, here are five times Dance Moms stars beefed after the show ended.

Maddie starred on Dance Moms from its premiere in 2011 until Season 7 in 2016. From the beginning, it was clear she was Abby’s favorite student because she was constantly on top of her infamous performance pyramid ranking system and, therefore, Abby assigned her more solos than anybody else. Despite Abby’s tough teachings, she and Maddie appeared to be very close throughout their time together on the show.

However, things started changing in 2014 as Maddie’s collaborations with Sia began opening more doors for her. Shortly after leaving the show in 2016, Maddie revealed she was happy to be done with Dance Moms. "I had the craziest time when I was with [Abby] and on that team," the star told People in March 2017. "I’m really glad I moved on from that."

Fans took her comment as a dig at Abby, and if that wasn’t enough, Maddie didn’t thank her former instructor in her memoir, The Maddie Diaries, when it released that same month. She called Sia her "mentor" and only referred to Abby as her "dance teacher."

The drama continued during Maddie’s March 2017 interview for AOL’s Build Series. While promoting her book, she talked about how much more fun she had working with Sia on the set of her "Chandelier" music video. "I’m usually trained to point my feet and make sure I have perfect technique, but for this, I could let loose and do whatever and not be criticized for making a mistake," Maddie said. "My mistakes were good. They liked my mistakes. Everything was stress-free." She also said she didn’t have to "worry about winning a competition or making my teacher happy." 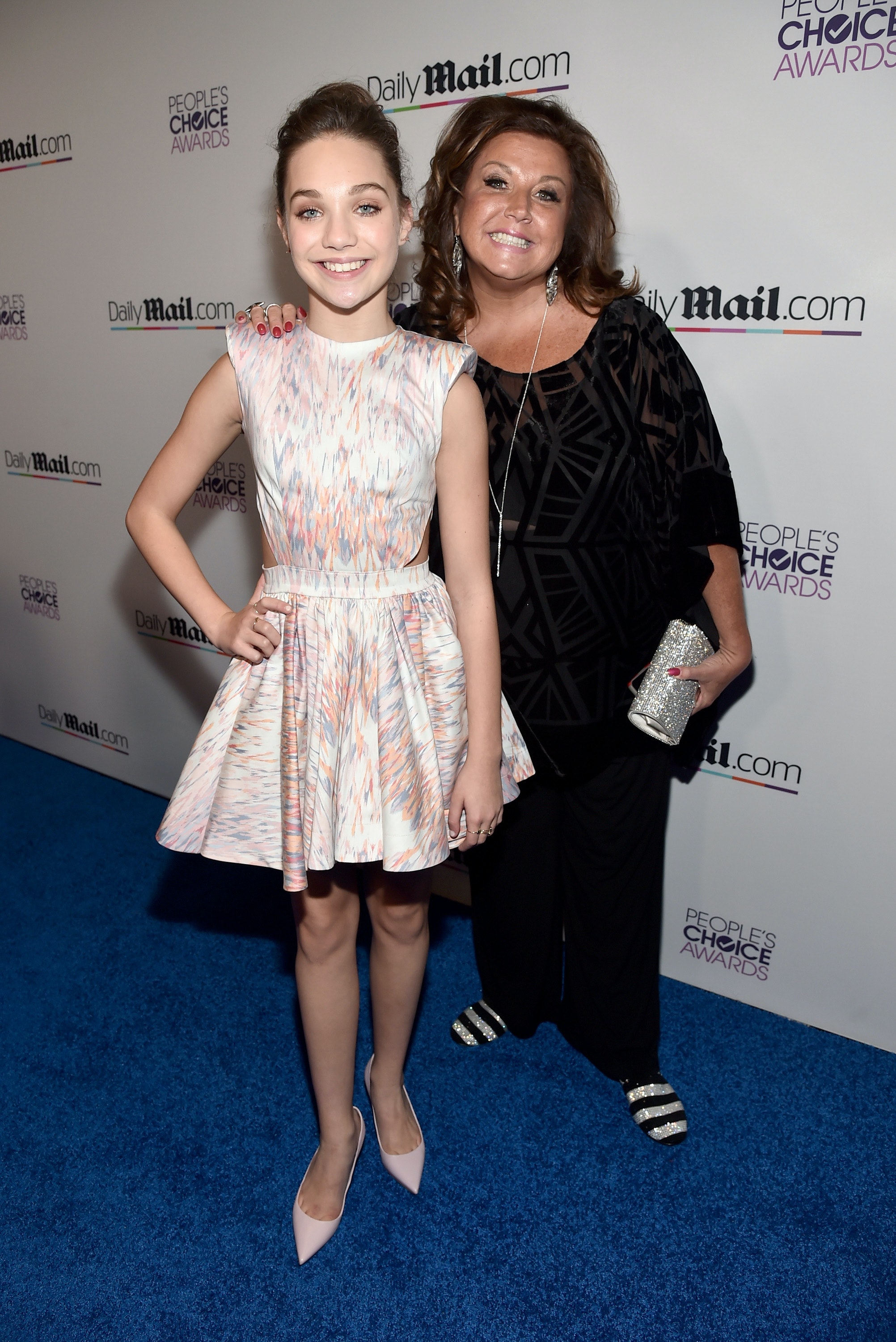 That brings us to February 2020, when Abby confirmed she and Maddie aren’t on speaking terms. After serving eight months in prison for bankruptcy fraud, Abby dissed most of the Dance Moms cast for not reaching out to her while in prison.

"JoJo stays in touch with me. I think everybody else forgot my name," she revealed on The Dr. Oz Show. "They needed to distance themselves from me. That was the word that was used. Distance themselves when I was indicted by the federal government." When asked if Maddie was one of these people who stopped being friends with her, Abby said, "Absolutely."

Abby and Brooke Hyland have a very complicated history, to say the least. In Season 4 of the show in 2014, Brooke’s mother, Kelly Hyland, slapped Abby on camera after the instructor supposedly threw a chair at her (a judge later said there wasn’t enough evidence to support Kelly’s claim). Their physical altercation led to an intense legal battle that ended with both sides suing each other for assault, but all charges were eventually dismissed in 2015.

In May 2020, Brooke reignited their feud when she posted a TikTok in which she cringes at the suggestion that she follow Abby on Facebook. JoJo, who’s remained close with Abby even after Dance Moms, stood up for her former teacher, saying the diss was uncalled for. "It’s one thing to just not add her back," JoJo commented underneath the video. "It’s another to post it…"

Brooke may have felt sorry because she deleted the video shortly afterward, but not before fans reuploaded it on YouTube.

JoJo revealed the reason she defended Abby in a June 2020 interview with Entertainment Tonight. "It makes me really, really upset that I am one of the few that really, truly thank Abby, and are thankful and grateful for what she’s done for us. Because without her, Dance Moms wouldn’t be a thing," she said. "[Abby] did some things to you that were not fair, [but] it was years ago, do not take it online. If you don’t wanna add her back on Facebook, that’s totally fine, but you don’t need to publicly shade someone like that … it’s just unnecessary."

In June 2017, Kenzie Ziegler’s former record label Kismet Music sued her, claiming she broke her contract by working with an outside producer. Kenzie countersued, claiming the label underpaid her. According to documents obtained by TMZ, Kenzie’s lawyers said she only signed with Kismet Music because of Abby, who convinced her to join the label (Abby’s team did not respond to Elite Daily’s request for comment on this claim).

Abby didn’t appreciate being dragged into Kenzie’s legal mess. During a June 2020 episode of her YouTube show, Ask Abby, she shaded the star’s music career, and said, "Well, she’s not a dancer remember. She’s a singer," while putting hand quotation marks around "singer."

Check out the moment near the 20:40 mark below.

Kenzie eventually saw it on Instagram and was not happy about it. "Love when people can’t keep my name out of their mouth just to stay relevant," she wrote underneath the clip.

The 2020 presidential election had the entire country divided, including the Dance Moms cast. On Nov. 3, Kalani Hilliker, who starred in the show from Seasons 4 to 7, publicly endorsed President Donald Trump on Twitter, writing, "No matter who you’re voting for use your voice and vote!!! It’s your right!!! #Trump202020."

Afterward, she took to Instagram, writing, "America is the greatest country because everyone has the freedom to express their opinions so no matter what happens this week we need to all come together as Americans and respect one another."

Kendall Vertes, who starred alongside Kalani on Dance Moms from Season 4 to Season 7, reposted her friend’s message on her own story, along with the caption, "What she said."

That pretty much caused everyone else from the show to get involved, like OG Dance Moms star Nia Sioux, who fired back at Kalani and Kendall. "America hasn’t been great and it’s not going to be great until we have people in office who care about people other than themselves," she wrote. "I’m all for respecting people, but at a certain point when someone can’t even denounce white supremacy how can you have respect for that person?" Nia didn’t mention either of her castmates by name, but her message to Kalani and Kendall was clear. 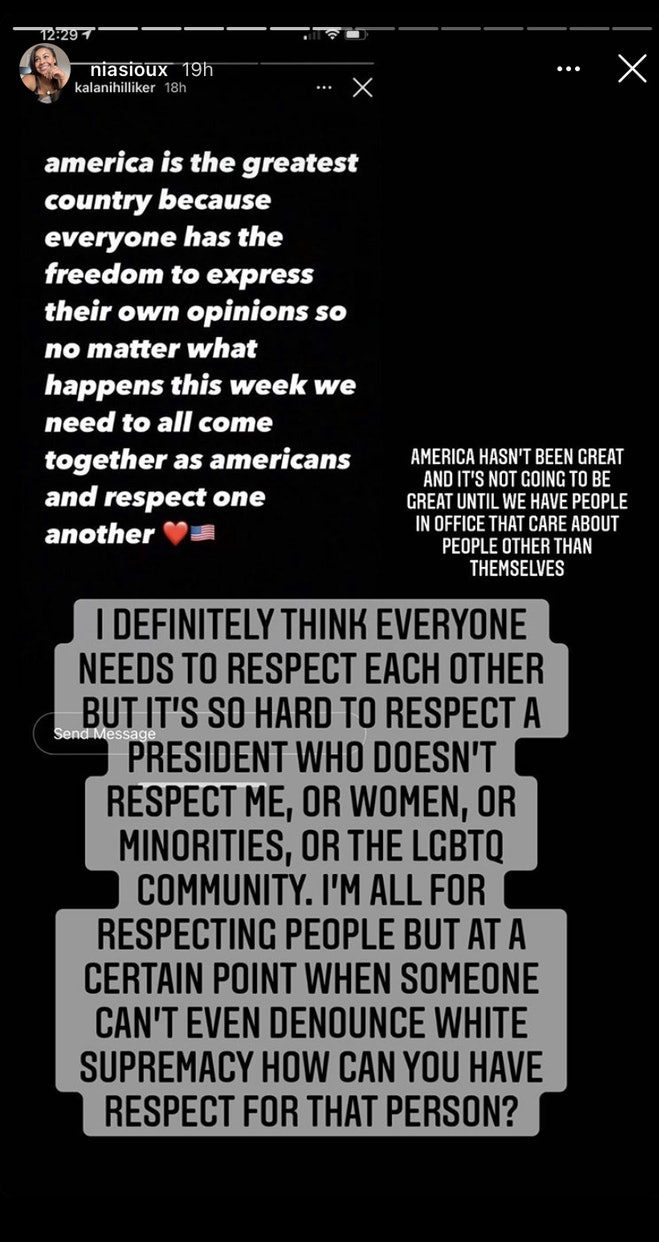 Kenzie opted for a more subtle approach. She wrote, "Vote blue!" underneath a video about Kalani’s comments.

As for Chloe Lukasiak, her Twitter likes did all the talking. According to screenshots obtained by the TikTok Room, the star liked the following comment directed at Kalani: "This is why Maddie, Chloe and Nia used to eat your *ss up in the studio."

In response to a fan asking if Christi was still in touch with Gianna, she said, "No, Gianna’s not nice." This caused JoJo to go off in a video on TikTok, where she called Christi’s comment the "most disgusting and ignorant thing" she’s ever heard.

"First of all, Gia is one of the sweetest people in the whole world. And second of all, she works so hard every single week for so many people, including Chloe," JoJo said. "[Gianna] had one of the most stressful jobs on the show. She was in charge of choreographing every single number. Now, yes, of course everyone has their moments and everyone isn’t nice 24/7, including you, Christi."

JoJo went on to shade Christi. "The thing is, you don’t need to say that somebody is not a nice person. I’m sure you’re a very nice person, even though the experience that I’ve had with you, you were not nice to me. You actually made a very rude comment to me, but it may have just been a moment," she said.

Of course, Christi just had to reply to JoJo, but her response was surprisingly measured. "So I actually have no idea what JoJo’s experience on the show was because I never filmed a season with her," she said. "So I have to take her word for it. If she had an amazing, positive experience, then I’m really happy that that’s how it went. And I honestly just wish mine had been a little similar."

Considering everything that happened on Dance Moms, it’s no surprise the stars’ drama followed them off the show.

In Elite Daily’s It’s Complicated series, we dissect the biggest celebrity drama to find out what happened in front of the camera, behind the scenes, and everywhere in between. Read more here.