Nothing is ever plain sailing with Gemma Collins, but we wouldn’t want it any other way.

The Towie star, like most of the UK, has been celebrating Queen Elizabeth II’s Platinum Jubilee this week, and hosted a party at her Essex mansion.

However, the reality TV icon, 41, ended up taking a tumble and falling flat on her face on stage, which she did, in her own words, in ‘true GC style’.

At least Gemma was able to laugh off her trip, which has naturally provided endless laughs for the internet.

Before any of her pals could embarrass her, she beat them to it by posting a video of the hilarious moment on her Instagram, which boasts 2.2million followers.

The video shows partygoers listening to God Save the Queen in Gemma’s garden while she walked up to the stage to take the microphone. 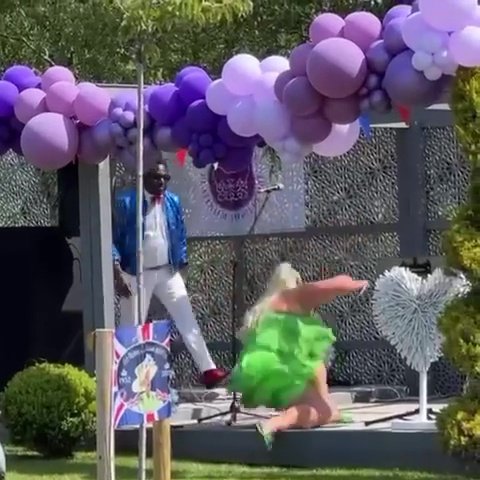 But gravity was just not on her side, as she slipped and ended up on the ground.

At least she looked fashionable while the awkward moment occurred, as the meme queen donned a bright green fringed dress, perfect for a sunny day.

Her friends and followers were lapping up the chaos, with her comments section immediately flooded with crying laughing emoji.

‘Omfg this is amazing 😂😂’, wrote the GC’s hair stylist, James Johnson, adding: ‘At least your hair looks good even on the down fall 😂’

This isn’t the first time Gemma has hit the deck and provided us with lols for days – who could forget that iconic fall at the Radio 1 Teen Awards where she plummeted down a hole in the stage? It still replays in our minds.

In other news, Gemma was left distraught recently when she was forced to pull out of Chicago’s UK tour.

The Essex gal was set to play Mama Morton in the musical, but had to withdraw following a knee injury, which she said left her in indescribable pain.

She will be replaced by Loose Women panellist Brenda Edwards, who joins the cast for their June and July dates.

Gemma joins millions of Brits enjoying the Jubilee fun this bank holiday, with thousands lining the street outside Buckingham Palace in honour of her Majesty’s 70 years on the throne.

On Saturday, a host of famous faces – including Queen + Adam Lambert, Diana Ross, Sir Rod Stewart and more – will take to the stage for an exciting concert, titled Platinum Party at the Palace.

The BBC is co-hosting the musical extravaganza with the Royal Family, so the show will air on BBC One and iPlayer this weekend.

Taking place from Thursday, June 2, to Sunday, June 5, the celebrations mark Her Majesty’s record-breaking 70th year on the throne.

Across the UK, there will be street parties, concerts, and other special events attended by the Queen and senior members of the Royal Family.