Many of his fans reacted to the change, wondering what Drake Bell’s new name is all about and why he chose to don a Spanish last name.

The former star of the sitcom Drake and Josh seems to have a reason for the name change, though, based on his social media, life, and career path over the past year.

This week, Drake Bell officially switched up his name. Even though his handle is still @DrakeBell, he’s now going by the name Drake Campana on his Instagram and Twitter accounts. He also added a Mexican flag. His Twitter bio jokes that he’s “CEO of Taco Bell.”

As of this writing, it’s unknown if Drake is legally changing his name or if it’s simply a rebranding for the talented actor and singer.

The Spanish word campana translates to “bell” in English, so it fits in that regard with his last name.

However, it also makes sense as he’s been recording Spanish music since 2019. That includes the song Feugo Lento, which he released in 2019, along with an official music video (below).

Also, Drake Bell/Campana started to post all social media messages in Spanish, dating back to November of last year.

That translates to “My social networks will now only be in Spanish, no more English.”

The singer has yet to release any official announcement about the changing of his name, but on Friday (November 20), he posted two new Instagram videos.

In the video, he promotes his Cameo service where fans can pay to have him record a special message for themselves or someone else. Drake promotes the Cameo in English in his first video and then speaks Spanish in the second one.

A few comments on the above IG post say Drake had moved to Mexico and has been speaking the Spanish language for the past year. One commenter even joked that “this man changed his whole identity,” which could be accurate if some of the recent speculations are true.

Even though there’s yet to be any confirmation that Drake has moved to Mexico, he did post memes on his social media in the past about his plans to focus more on the country rather than the United States.

Of course, once Drake Bell became Drake Campana, it started up all sorts of speculation online, bringing interesting memes and observations about why he changed his name.

Some joked that his music sounds pretty good, so maybe the different name was his destiny in life.

Another Twitter user tweeted that Drake made the change due to having a bigger appeal in Mexico, hence a rebranding.

The biggest rumor on Twitter is that he changed his name after being accused of abuse, fled the country, and is now focused on his career in Mexico. 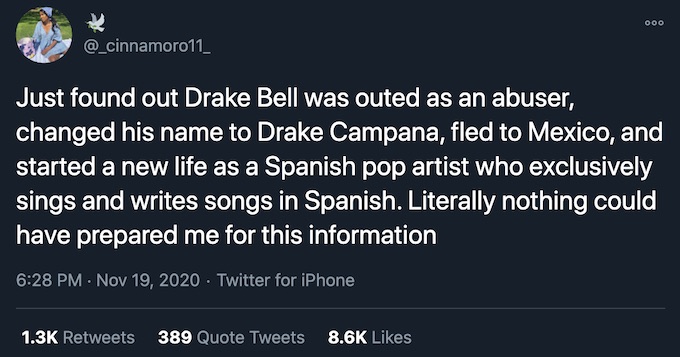 Another Twitter user pointed out something similar about Bell starting to use the new Drake Campana name. They also mentioned that it seemed to take many people some time to notice why he did this.

Abuse allegations were brought to light this past August by his former girlfriend, Melissa Lingafelt. Bell and Lingafelt dated for about two years.

Based on a PEOPLE report, Lingafelt accused Bell of verbal and physical abuse. Bell denied the allegations saying he “never abused my ex-girlfriend or did so many of the other things Melissa falsely claimed on her TikTok video.”

TikTok star Lingafelt reportedly received direct messages from others once she posted her story alleging Bell’s abuse. Lingafelt shared a screenshot of a direct message that included allegations of Bell having sex at age 20 with someone who was 15 at the time.

He denied these allegations in a statement to PEOPLE, but that story and the allegations now have people connecting it to his Drake Campana name change.

Tags: Campana:, drake, Is, mea, the, what
You may also like
Celebrities News