Diplo appeared to be blissfully unaware of the coronavirus pandemic while hosting a massive pre-Super Bowl party in Tampa Bay, Florida.

The 42-year-old DJ headlined a show on Saturday night at the Godfrey Waterfront Hotel’s WTR Tampa Pool in anticipation of the annual sporting event.

Before the event, the producer posted a few photos to his Instagram to show his fans that he had taken precautions before playing the show. 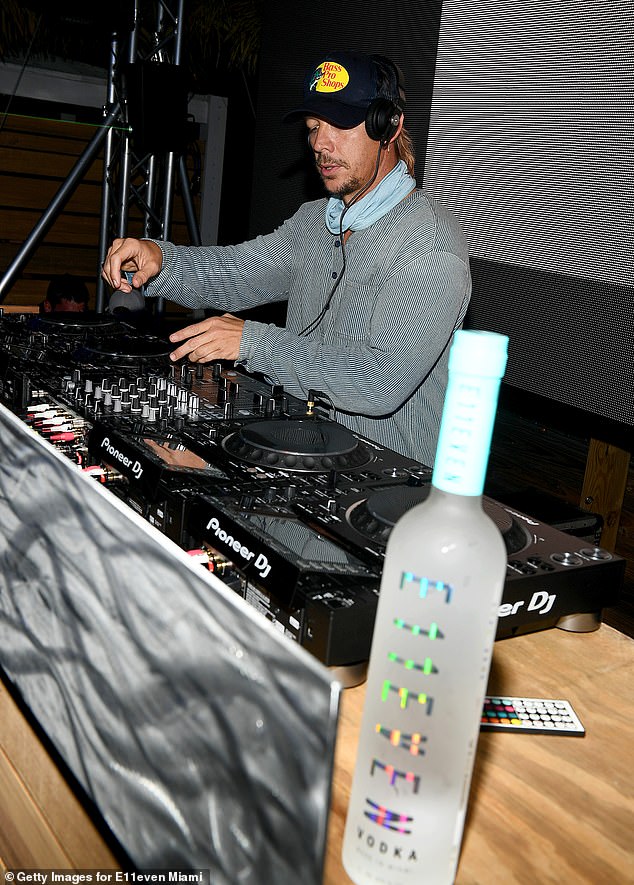 No worries: On Saturday evening, Diplo played a show for 2,000 fans in Tampa, Florida in anticipation of the Super Bowl; virtually no safety protocols were observed during the event 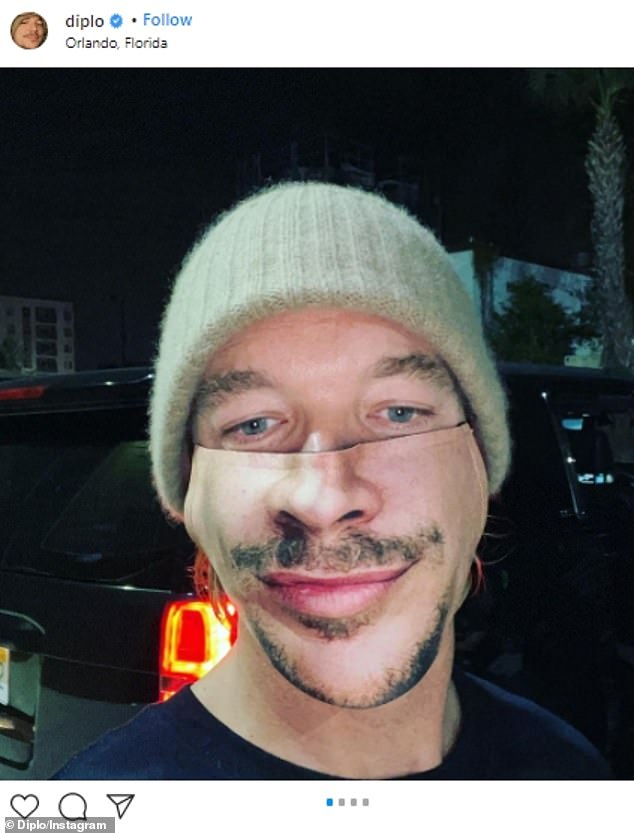 He’s fine: The producer took to Instagram to show his fans that he had taken precautions before playing the show

The producer shared a snap of himself with a mask on, which he removed for his performance.

He included a photo of a sign that partially read, ‘Masks are mandatory…please social distance and wear mask at all times.’

Diplo also shared a picture confirming that he had received two vaccinations for COVID-19 before the event.

However, many of the 2,000 fans who attended the party did not appear to be observing safety protocols, as photos and videos showed concertgoers standing close to one another as they watched the DJ perform. 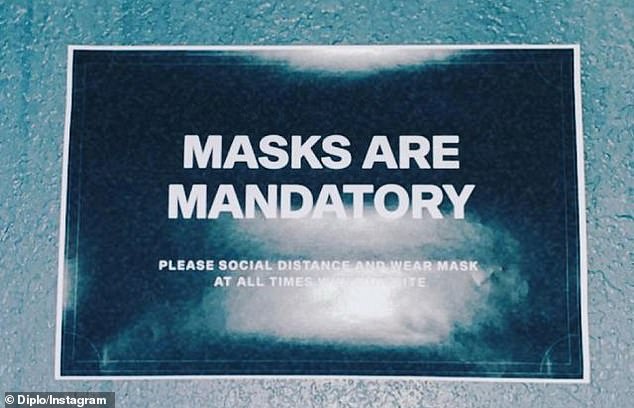 Not even necessary: Diplo posted a photo of a sign that had been posted outside the performance venue asking fans to stay safe during the concert; it appeared to have been ignored by many of the concertgoers 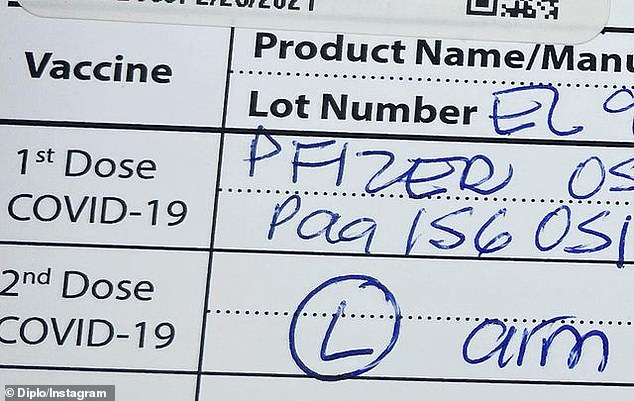 Proving it: The DJ also included a snap to prove that he had been twice vaccinated against COVID-19

In a release obtained by TMZ, the Tampa Police Department condemned the partying that occurred last night and bemoaned the lack of regard for public safety.

The statement partially read, ‘Scenes from WTR last night and a few other clubs were incredibly disappointing.’

The crowd apparently went wild when Diplo played his hit with Morgan Wallen, Heartless, days after the country star was removed from multiple platforms and dropped from his record label after shouting a racial epithet following a night out.

Diplo was not the only entertainer who put on a safety-devoid show yesterday evening, as rapper 50 Cent hosted his own concert to celebrate the upcoming sporting event. 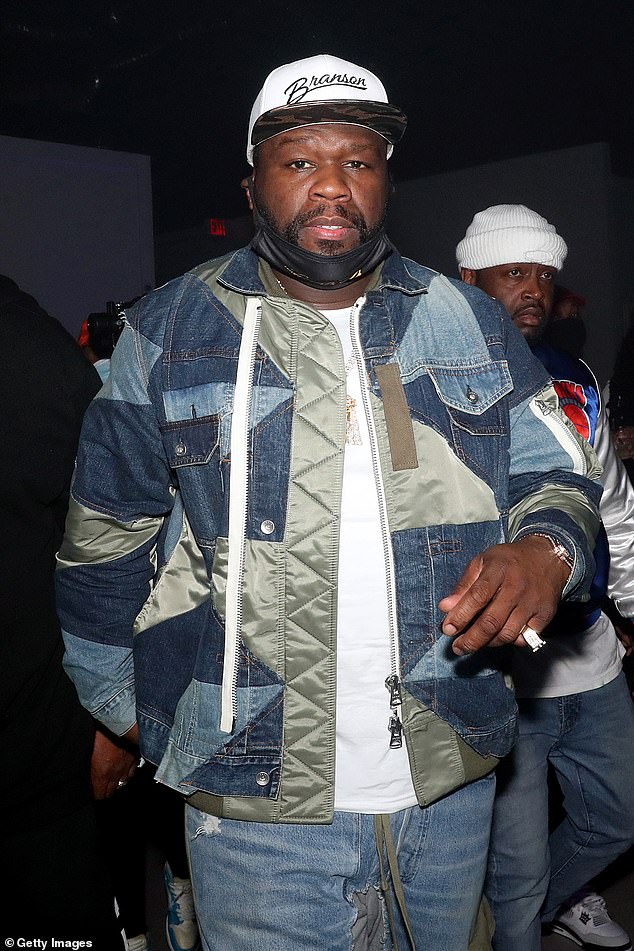 Host: 50 Cent also hosted a pre-Super Bowl event of his own on Saturday; he previously headlined a show the night before with little to no regard for public safety 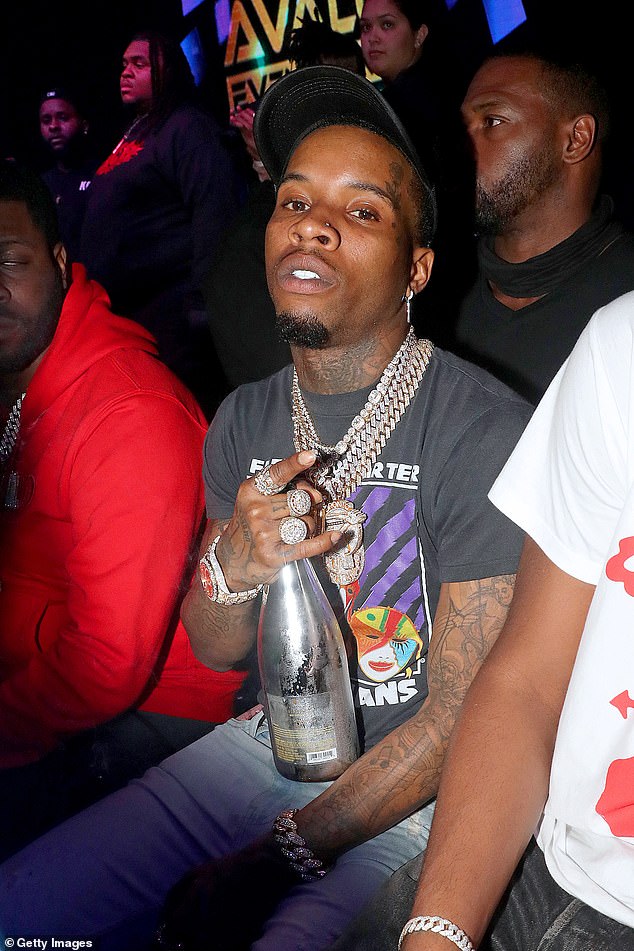 Appearances: Rapper Tory Lanez was seen at 50 Cent’s event; he was not observed wearing a mask or observing other safety protocols 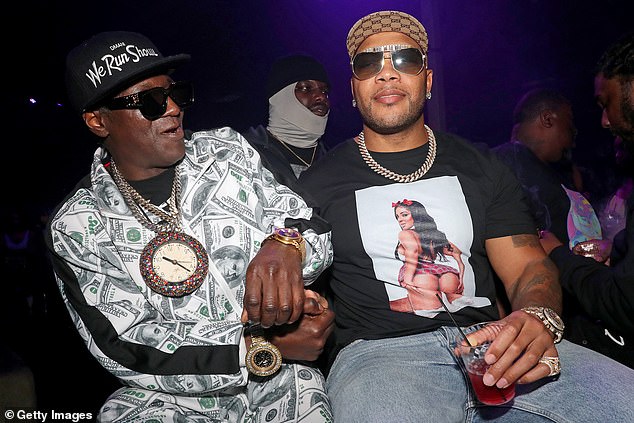 Numerous other musicians, including rappers Tory Lanez, Flo Rida and Flavor Flav, made appearances at the concert.

Like Diplo’s event, virtually no COVID-19 safety guidelines were observed by either the performers or the fans during the show.

The 45-year-old hitmaker is also set to host a watch party for the Super Bowl tonight. 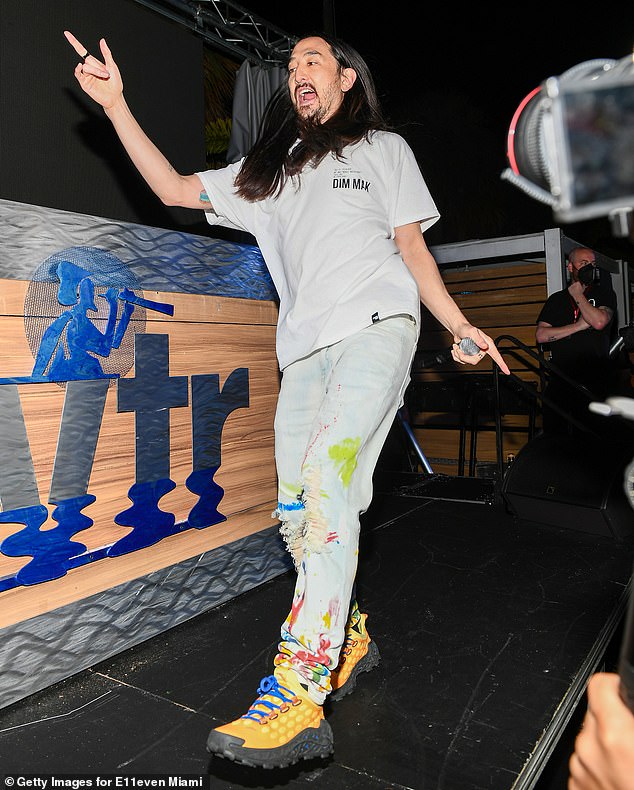 Mask off: Steve Aoki also hosted an event of his own at the WTR Tampa Pool on Friday evening, where he sprayed champagne over a crowd of fans on Friday

DJ Steve Aoki also hosted a pre-Super Bowl party of his own at the WTR Tampa Pool at the Godfrey Waterfront Hotel on Friday, which TMZ covered.

The event’s organizers made a point of expressing that masks had to be worn and that everyone should have maintained six feet apart from each other.

However, footage from the event showed that neither protocol was being followed by anyone in particular.

The 43-year-old DJ and producer also came into close contact with his fans in order to spray champagne over them. 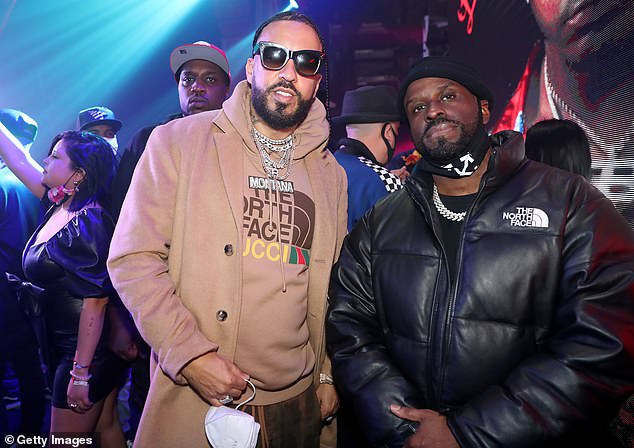 In attendance: French Montana, ready to party, arrived to an event with a mask in hand, but not on his face; Montana pictured with Funkmaster Flex at The Big Game Bash at The Ritz Ybor 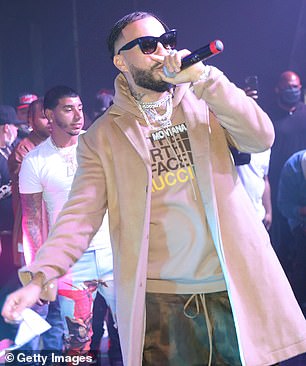 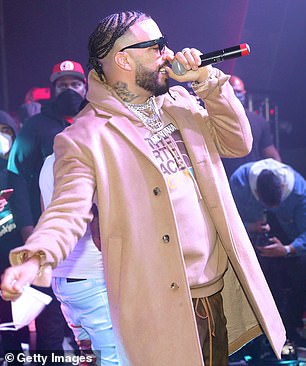 Neither the majority of the performers or the fans in attendance were seen observing any coronavirus safety protocols.

The Unforgettable rapper took a video of himself wearing a face mask at one point; he later removed his protective covering during the show. 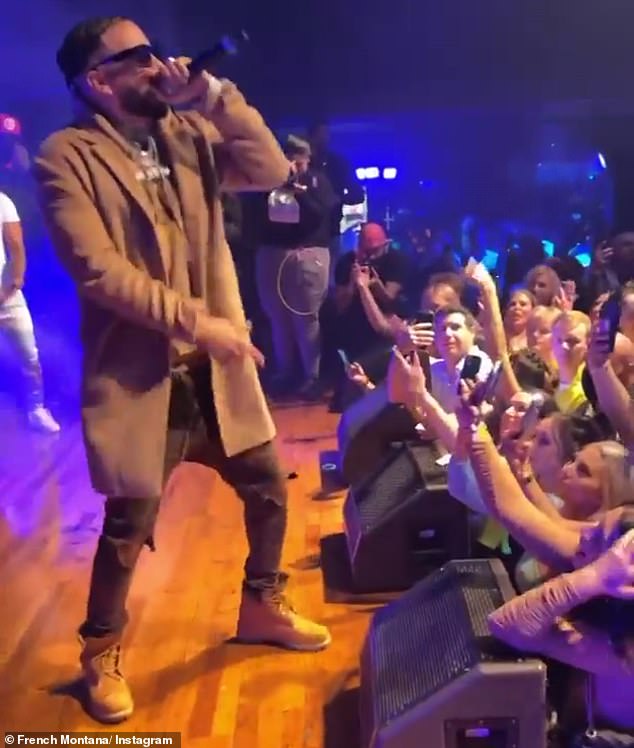 Take a gander: French shared footage from the show with his Instagram following on Friday night 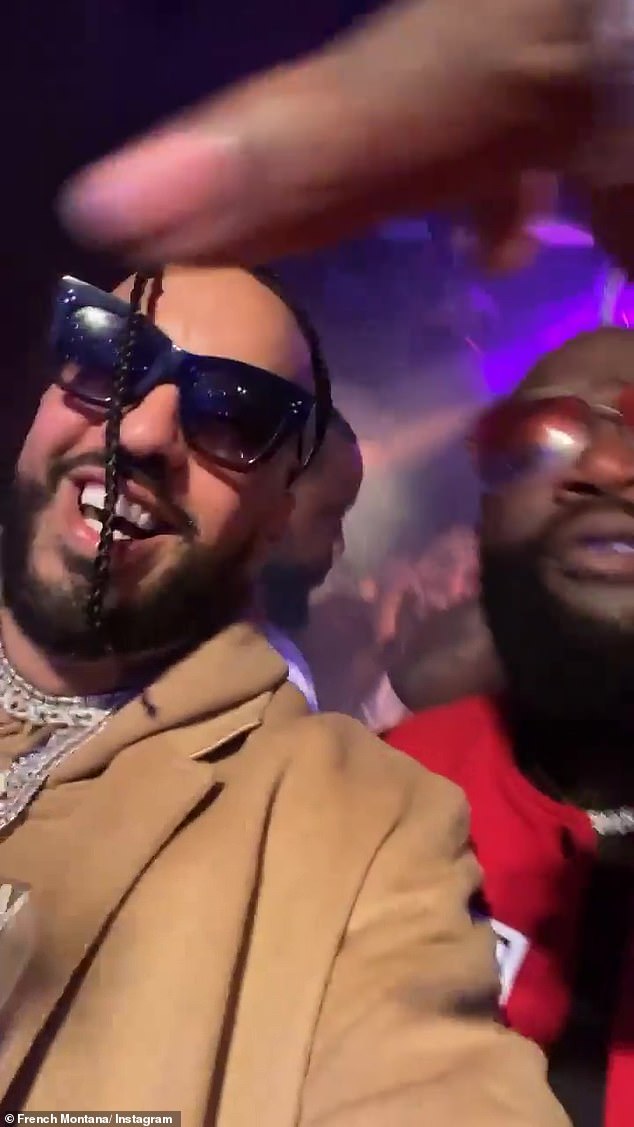 Getting close: The Unforgettable songwriter shared multiple videos to his Instagram story showing him getting close to both his fans and fellow performers

On Thursday night, Tory Lanez threw a pre-Super Bowl event at the same venue Aoki would occupy a night later.

The 28-year-old songwriter also documented the event through his Instagram Story, and made a point of sharing numerous shots from the non-socially distanced party.

Many fans have traveled from across the United States to attend the Super Bowl and other functions associated with the annual sporting event, and many public officials are worried that the increased social interaction will only serve to spread COVID-19 further. 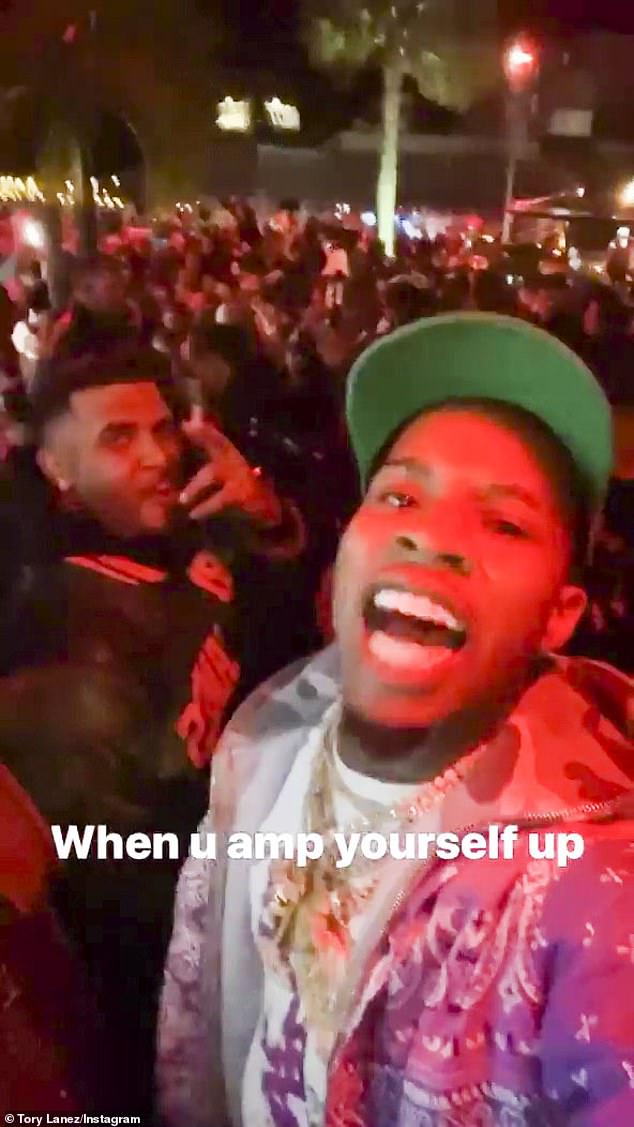 Super-spreader event: On Thursday evening, Tory Lanez hosted an event of his own and shared a video of himself mingling with crowd members