The 24-year-old actress, who stars in ‘Frank and Penelope’, lets out a scream and scares off the intruder, who is then arrested when police spot him running down the street.

AceShowbiz –Caylee Cowan was awakened to a nightmare. The actress, who is currently dating Casey Affleck, had a scary encounter with an intruder when she was all alone at home on early Tuesday morning, June 21.

The 24-year-old was sleeping in the bedroom of her Los Angeles home when she woke up to find an intruder in her room, according to TMZ. LAPD sources tell the site that when Caylee opened her eyes, the man was staring down at her. The incident reportedly happened sometime around 3 A.M.

Caylee’s first reaction was screaming from the top of her lungs and that apparently was enough to scare off the burglar, who quickly ran out of the house. The L.A. native then called 911 and was able to give the description of the guy.

Thankfully, the intruder has since been arrested. When police raced to the scene with sirens blaring, they spotted the guy running down the street. The man was taken to the station and booked for burglary as he also rifled through some of Caylee’s stuff in another room before entering her bedroom. He faces potential additional charges when the D.A.’s office gets the case.

It’s currently unclear how the man got inside the house, but there was no sign of forced entry. Caylee’s boyfriend Casey was not home at the time and the actress was unharmed in the incident.

Caylee has not spoken up on the incident, but she appeared to be okay when stepping out for a promotional event of her new movie “Frank and Penelope“. Shaking off the terrifying encounter, she attended the star-studded premiere for the film in Los Angeles on Wednesday night, joined by her actor/filmmaker boyfriend on the red carpet.

The “Sunrise in Heaven” star exuded vintage beauty in a plunging blush gown with a flowing semi-sheer skirt as her brunette hair was parted down the middle and styled in a bun. She completed her look with a pair of strappy heels and a pair of glitzy drop earrings. 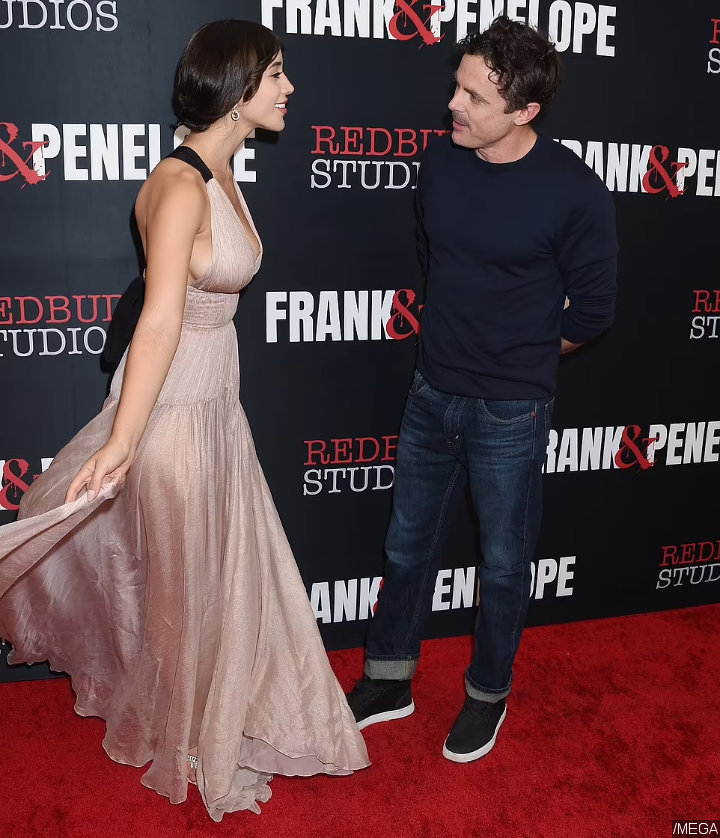 Caylee Cowan was joined by boyfriend Casey Affleck at ‘Frank and Penelope’ premiere in Los Angeles.

Casey opted for a casual look in a fitted blue sweater styled with a pair of dark wash denim jeans. The brother of Ben Affleck also wore a pair of black slip-on shoes. Being a supportive partner, he wrapped his arm around Caylee’s waist as they posed for pictures.