Britney Spears, 39, and Justin Timberlake, 39, were the ultimate couple back in the day! The pop princess and then *NSYNC member defined celebrity romance for a generation — but few of their moments are as memorable as this denim look. For the American Music Awards in 2001, the pair sported an eye-brow raising set of matching outfits: Britney wore a strapless denim dress with patchwork detail, while Justin re-defined the meaning of a Canadian tuxedo. 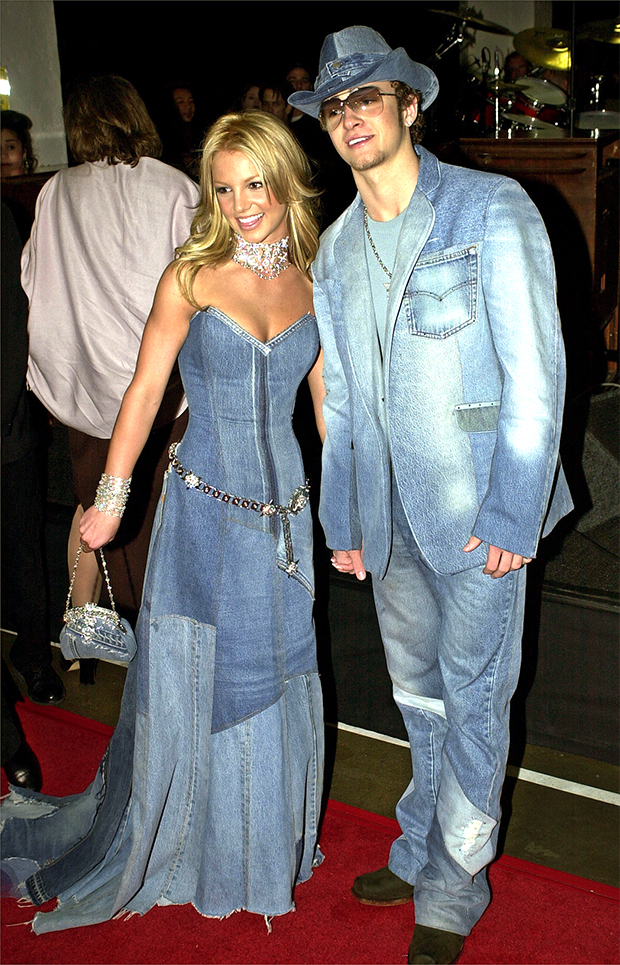 The …Baby One More Time singer paired the one-of-a-kind dress — designed by duo Kurt and Bart — with a very 2000s rhinestone choker, bracelets and chain belt. Meanwhile, Justin rocked light wash denim jeans, a blazer and cowboy hat designed by Steven Gerstein. He echoed his then-girlfriend by accessorizing with a silver chain necklace, and we can’t forget about the wireless ombré sunglasses. Although it’s been 20 years since Britney and Justin sashayed down the red carpet in the twinning looks, the photos have gone on to become remembered forever in meme and social media culture (not to mention many Halloween costumes).

Sadly, Britney and Justin’s relationship came to an end in 2002, spawning JT’s iconic break-up song “Cry Me A River” later that same year. Although he’s been married to Jessica Biel, 38, since 2012, questions still come up about this particular denim-themed moment. “You do a lot of things when you’re young and in love,” Justin hilariously said to former *NSYNC member Lance Bass on his Daily Popcast back in March, adding it was a look one could probably “rock today.” Notably, Justin did go on to co-found luxury denim line William Rast with BFF Trace Ayala in 2005.

Britney and Justin fans took to social media to celebrate the 20 year milestone, with many reminding each other to “never forget.” Other fans pondered going “back in time” to the era of 2000s fashion. “Why can’t we go back to simpler times to when Britney and Justin had matching denim suits,” a user posted, while a third dubbed the two brave for rocking the “double denim” looks. “Only three people (that I know of) are brave enough and can pull off denim on denim and it’s Britney Spears, Justin Timberlake, and me,” they wrote.

Steven Gerstein, who designed Justin’s unforgettable outfit, talked about how the look came about: it turns out the young couple — then 19 years old — came up with the all-denim idea on their own while in New Orleans. “It was a really organic… it was just two kids, wanting to do something cool, and being super cute, matching. It was kind of like their prom,” he said to Jezebel in June. “It’s so funny, I sometimes forget that I did it, and forget that it is so iconic,” Steven added, revealing the look was sewn together just “hours” before the show.

Although it’s been years since Britney and Justin were an item, there doesn’t appear to be bad blood between the exes! Brit posted a hilarious video of herself dancing to Justin’s single “Filthy” back in April, acknowledging their past history. “I know we had one of the world’s biggest breakups 20 years ago,” she wrote on April 15. She added, “But hey the man is a genius !!!! Great song JT.” Justin commented back with three hands up emojis in the comments. Britney also posted a photo of the unforgettable look to her Instagram account on Aug. 6, joking she “guesses my denim look was a hit years ago.”