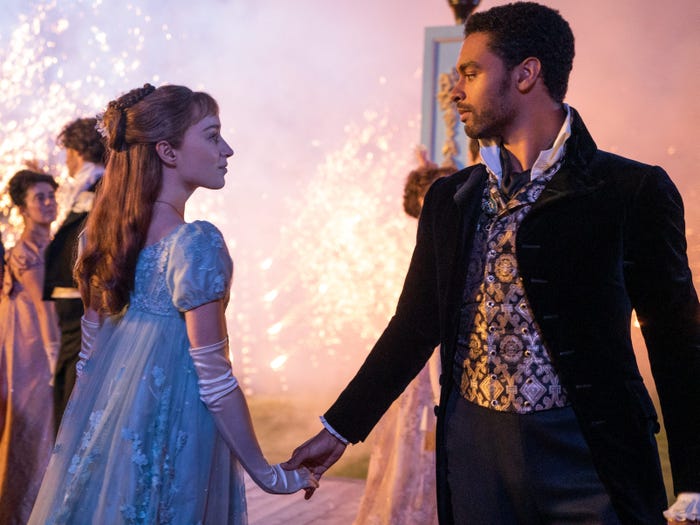 Netflix's "Bridgerton" takes place in early 19th century England, so viewers can expect plenty of the pianoforte, harp, and string quartets typical of period pieces set in the Regency era.

However, there are several songs in the historical drama series that may sound familiar even to those who have never watched a single Jane Austen adaptation.

For example, Ariana Grande's "Thank U, Next" plays at the first ball of the season in the premiere, and Taylor Swift's "Wildest Dreams" is in the background of Simon Basset (Regé-Jean Page) and Daphne Bridgerton's (Phoebe Dyvenor) steamy love scene in episode six.

Songs like Billie Eilish's "Bad Guy," Shawn Mendes' "In My Blood," Maroon 5's "Girls Like You," and Celeste's "Strange" are also featured in the first season.

The characters in "Bridgerton," a series loosely based on Julia Quinn's bestselling novels, exist in the early 1800s, so fans were surprised to hear current hits woven into the plot.

Given the fact that the series pushes the period piece genre in many ways, it makes sense that the show would include a touch of modernity, and many fans applauded the creativity.

In a recent statement to Entertainment Weekly, Bowers said, "I'm so thankful to not only have been a part of this incredible show but to also make music like this with all of our musicians recording remotely."

He continued: "I couldn't have done this without my team and the amazing musicians who put a tremendous amount of heart and emotion into this score, all from their home studios."

Tags: 'Bridgerton':, Period, Television
You may also like
Celebrities News