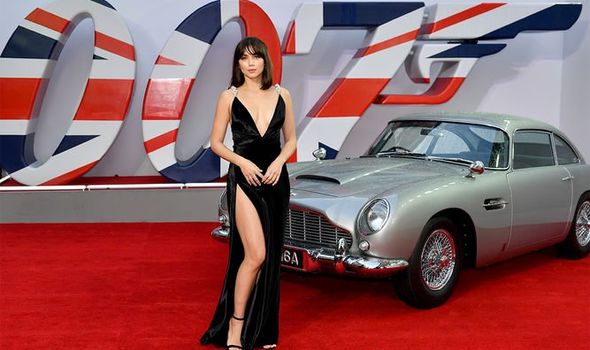 But, still, given the history behind the Bond Girl tag, there was no way she was going to say yes without knowing exactly what would be required of her.

“It was actually very flattering to be called,” the Cuban-born actress admits in her lightly accented English. “The character had not been in the script originally. So when Cary [Fukunaga, the director] called me to say there was a part of the movie that takes place in Cuba and that he was thinking about writing a part for me, it was insane.

“I was blown away and very excited. But I also said, ‘OK, but I want to read the script before I agree, because – yes, you know, you’re Cary Fukunaga and it’s James Bond, but I still want to know what I’m going to have to do here.'”

As it turned out, the 33-year-old was delighted with what she called her “bad*ss” role, playing Paloma, a CIA agent who packs not only the trademark Bond girl curves, but also a powerful punch of her own. Her turn attracted glowing reviews.

“So it was all good!” she smiles. “And the Bond movies are fun. I liked the people on the set very much: this was Daniel’s fifth Bond film, and you can tell that so many of them had worked together for some time, because they are like a family.

“It was a good group to be a part of and a great experience to have, especially in this time when Bond’s women characters are changing.

“That meant I was able to bring something else to the franchise, maybe something more interesting. I was very happy to be a part of that.”

She says the first Bond movie she remembers seeing was Timothy Dalton’s Licence To Kill.

“At least that’s the one I remember. I’ve liked all the Bond girls, especially Eva Green and Léa Seydoux, and I thought Grace Jones was awesome. But I think that Daniel is the best Bond so far.”

For Ana, it was the second time she had worked with Craig: they had previously appeared together in the 2019 detective spoof Knives Out, where they had already formed a friendship.

“I love Daniel,” she says now. “And it was nice that I’d worked with him before because being the new girl all alone in a James Bond movie is very scary. But having met Daniel before, there was no pressure on set because I was already broken-in with James Bond himself.”

She admits the experience was also bittersweet in that, as well as being Daniel’s fifth Bond outing, it was also his last. “It was very sad. It was a very emotional time for all of us, to see the end of something that had been in someone’s life for so many years.

“But it was also beautiful and I’m proud of having been there with him in the last shot of the movie. Daniel is… how do you say?… relentless in his work, he always shows up on set, no matter how exhausted he is, he shows so much respect for the work, and that’s how I feel about him, too. He’s very inspiring and a great mentor to me.”

Ana grew up in Cuba, the daughter of a teacher and a government worker, a young girl from a small town, Santa Cruz del Norte, with big ambitions to act – “Not even Havana,” she notes, wryly, “just a little beach town”.

“There was not a day or a moment when I said consciously, ‘I want to be an actress’ – there wasn’t even a particular actress who inspired me.

“I come from a very humble family, we never had a DVD or VHS or any of that, but I had a neighbour that had one. And one day I was in her apartment and I was watching this movie — I think it was Matilda — and afterwards I went downstairs to my place and I played out the whole movie for my brother who hadn’t seen it.

“When I was watching movies after that, if I saw some scene played by a woman — or even a man, it didn’t matter — if I saw a scene I liked, I wouldn’t wait to finish the movie, I would just run to the mirror to do it and then I would go back to the couch to carry on watching.”

When she turned 14, she joined Havana’s National Theatre School of Cuba, and at 18, she moved to Madrid to pursue a professional career, before transferring to LA in 2014 to seek her fortune in Hollywood – a move that she now says was beyond her wildest expectations when she was starting out.

“I had American actors on TV when I was growing up – Tom Hanks and Julia Roberts and Richard Gere. But to me, those movies were so, so far from my reality that I was really aware that it was all fiction, while the Cuban TV or movies I saw were much closer to my reality.

“The actors in those were the ones I wanted to be like, they were the ones I admired. So, I didn’t necessarily ever have a particular place or country that was my goal to go to, to be an actor. Like, I never thought of Hollywood or even Spain before I went to Spain.

“I just left because I had a Spanish passport from my grandparents who were born there, and I was excited about acting and I wanted to do more.”

She acknowledges that, excited as she herself was by the move, at the time, her mother was as worried as any mother would be.

“It was very hard for her to see her 18-year-old daughter leave home to pursue a crazy dream, but she was always supportive.

I think Daniel’s the best Bond. I’m proud to have been there with him in the last shot of the movie

“She’s very quiet, but she’s also very strong. And I think some of that just sticks with me, you know? She’s incredible and I miss her a lot.”

Although she confesses she still gets homesick for Cuba and her family, she says she’s also very happy now living in Los Angeles.

“I love LA,” she says. “I love the weather and mountains and beaches and the people and the food. Although most of my friends, funnily enough, are not from LA.

“I haven’t really met too many people who are from LA, they’re mostly from somewhere else. But that’s nice because nobody is from LA.

“And that brings us together because we support each other, and we give each other company, you know?”

Private by nature, she would prefer not to talk about her former boyfriend Ben Affleck, whom she dated for a year before they broke up, reportedly amicably, last January; nor about her reported current one, handsome Texas-based Tinder executive Paul Boukadakis.

But the itchy-footed actress does say, cryptically, that she’s not entirely sure she’ll stay in Los Angeles forever.