"The Invisible Man" premiered on Friday and is the first hit horror movie of the year.

The movie follows Cecilia (Elisabeth Moss), a woman who escapes an abusive relationship only to have her torment continue after her ex Adrian (Oliver Jackson-Cohen) turns himself invisible. It has garnered critical acclaim for its focus on the terrors of domestic abuse and gaslighting.

It also has a terrific twist ending where Cecilia — after being stalked, beaten, and harassed by her abusive ex — steals his invisibility suit and murders him, making it appear like a suicide.

It's an empowering and vengeful way to close a film that spends so much time focusing on Cecilia's abuse. And although it may have shocked audiences, the filmmakers cleverly included hints to the explosive finale throughout the movie.

Here are eight details you might have missed that point to the jaw-dropping conclusion of "The Invisible Man."

Adrian's lawyer and brother Tom tells Cecilia at the beginning of the film that she's still "physically near" her ex. 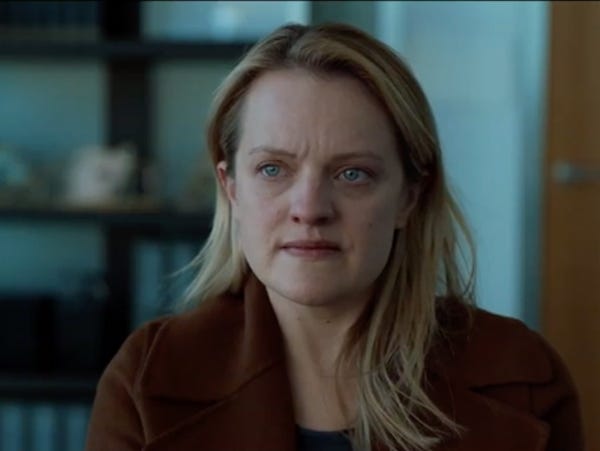 While it's pretty clear to viewers early on that Adrian's death was faked, Cecilia has no reason to believe otherwise until later in the film, when she finally gets a glimpse of Adrian in his invisibility suit thanks to some well-thrown paint.

But before that, she's just trying to move on, which is why Tom's thinly-veiled comment about Adrian's proximity to her is so disturbing.

As Cecilia and her sister, Emily, sit in Tom's office to discuss her inheritance of Adrian's estate, Tom tries to read a letter to Cecilia from Adrian. Emily abruptly shuts him down, along with his insinuations that Cecilia is a gold-digger, by remarking that if they had to be "physically near" Adrian, they wouldn't be there at all.

"You are physically near him," Tom remarks to their surprise, before pointing out the urn of Adrian's "ashes" right behind where they're sitting.

Cecilia breathes a sigh of relief, but given that Adrian wasn't actually dead, Tom's comment about his nearness has more truth than they realize — and is a pretty obvious clue to the later events of the film.

During that same visit to Tom's office, he offers Cecilia a gold pen to sign some documents. The gold pen becomes a major plot device later in the film. 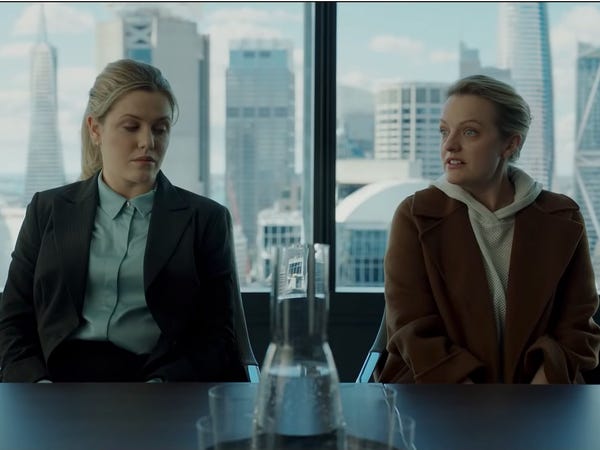 After hashing out the details of Adrian's trust, Tom slides a document — along with a gold-plated fountain pen — over to Cecilia to sign.

While it might seem like an innocuous moment, it's later echoed by Tom's visit to Cecilia while she's imprisoned for Emily's murder. After announcing that she can no longer be the recipient of Adrian's trust because she committed a crime, Tom gives Cecilia a document to sign renouncing her share of the trust, along with the same gold pen.

But Cecilia, desperate to escape and get back at Adrian, pushes the papers off the table in disgust. As Tom bends over to get them, she steals another one of the gold pens from his briefcase. Tom explains that he and Adrian both know Cecilia is pregnant, and that all she has to do is give him a call and he'll make all of her problems "go away."

However, once Tom leaves, Cecilia decides instead to lure Adrian out of hiding by slitting her wrists with the pen back in her cell. Unwilling to lose their child, Adrian grabs her wrist, allowing Cecilia to stab him multiple times with the pen and cause his suit to malfunction, eventually leading to them both fleeing the facility.

During a lighthearted moment with Cecilia, her childhood friend James, and his teenage daughter Sydney, James jokes, "It's two against one!" as the women playfully pummel him with pillows. 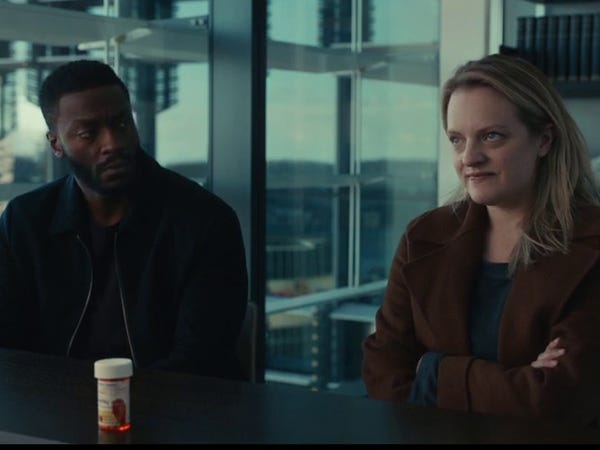 Before Adrian makes her life a living hell once again, Cecilia celebrates her newfound wealth by sharing it with James (Aldis Hodge), her childhood friend who's taken her in, and Sydney (Storm Reid), his teenage daughter who desperately wants to attend fashion school.

As the three are celebrating, Cecilia and Sydney playfully hit James with pillows, causing him to remark that "it's two against one." Even though it was likely just an off-the-cuff remark, it takes on a whole new meaning later in the film, when both Adrian and Tom team up to continue their torment of Cecilia by harming Sydney instead.

A blink-and-you'll-miss-it reference to the original "Invisible Man" hints at the movie's conclusion. 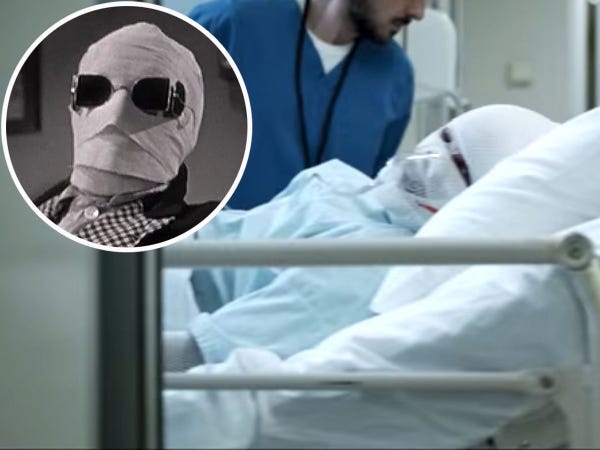 During a trip to the hospital after she faints at a job interview, Cecilia notices a man, his face and body covered entirely in bandages, being wheeled out of a room. The moment quickly passes, but it's very clearly a reference to the original "Invisible Man" film, which came out in 1933.

In that film, the lead character, a doctor named Jack Griffin, has turned himself invisible and covers his entire face and body in bandages so he can appear somewhat normal. The 1933 version concludes with Jack being killed by police after going on a killing spree, and telling his fiancée Flora, "I meddled in things that man must leave alone."

While the 2020 version of "The Invisible Man" features a much more empowering ending for Cecilia, the man in bandages is a subtle nod to the movie's history and an indication that things are going to get a lot more violent before they can get better.

During her escape from Adrian's house early in the film, Cecilia runs by his high-tech suit but doesn't realize yet what it is or how it works. 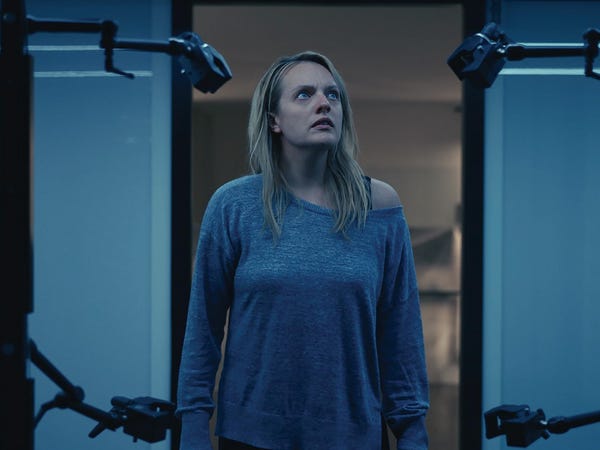 It's another blink-and-you'll-miss-it moment, but as she's disabling the house alarms and security cameras in Adrian's lab, Cecilia notices a strange empty room as she's on her way to freedom.

At the time, she brushes it off and continues her escape, but later, returning to the house, she discovers that the empty space was actually home to another of Adrian's invisibility suits — meaning that her suspicions are correct and he is, in fact, alive and continuing to torment her.

While it's eventually explained later on in the movie, this brief glimpse at Adrian's cutting-edge invention is a hint to viewers that there's more for Cecilia to uncover than meets the eye.

As Cecilia first begins to experience Adrian's invisible torments, James tells her, "Adrian will haunt you if you let him. Don't let him." 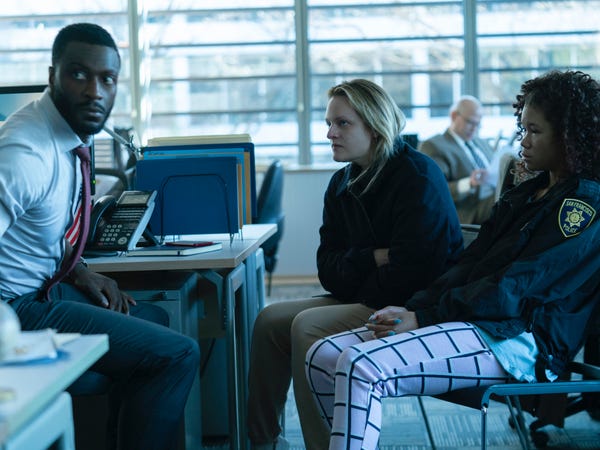 It's likely James is trying to be a supportive friend to Cecilia, but his advice to forget Adrian and move on from his "haunting" takes on a whole new meaning when it becomes clear that Adrian is actually haunting her.

Of course, James didn't know that Adrian had faked his own death and was continuing to torment Cecilia with the help of a high-tech invention, but it's an uncanny piece of advice regardless, and one that Cecilia clearly takes to heart when she slits Adrian's throat at the end of the film.

A job interviewer at an architecture firm jokes with Cecilia that they "both know the value of closet space." 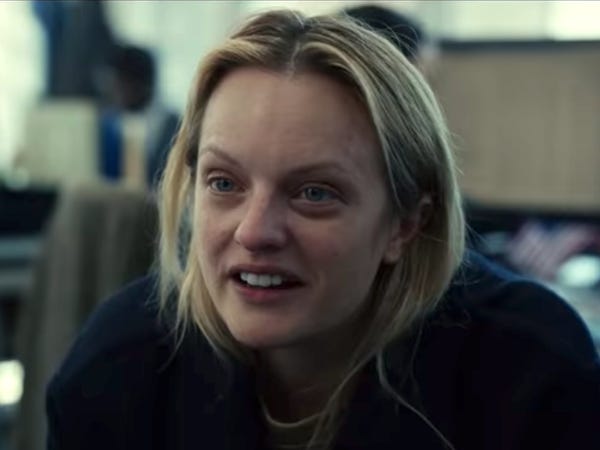 Cecilia's job interview at an architecture firm contains another seemingly innocuous moment that's a clue to the big finale later in the film.

As she exchanges pleasantries with her interviewer, Cecilia mentions that she studied abroad in Paris and "lived in a broom closet" since she didn't have much money. The interviewer laughs, and tells Cecilia in response, "Seems like we both know the value of closet space."

It's a pretty benign comment, but one that takes on a whole new meaning when you consider as she was planning her escape from Adrian, Cecilia hid her getaway bag (with clothes, money, and her passport) in a ventilation shaft in their closet. After she finds Adrian's second invisibility suit later in the film, she stashes it in the same spot, putting it on later to kill him over dinner.

She really does know the importance of a good closet.

When Cecilia meets with Adrian to reconcile over dinner, she requests to eat steak so she can get her hands on a possible weapon. 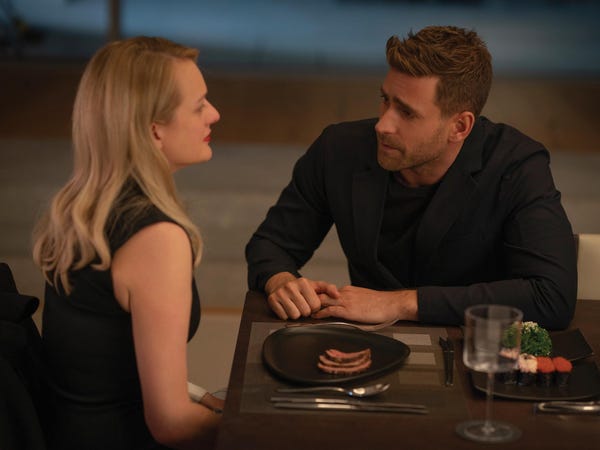 After escaping from the psychiatric facility, saving James and Sydney, and shooting someone in an invisibility suit who she assumes is Adrian, Cecilia discovers to her horror that she didn't actually kill her abusive ex — just his brother, who'd apparently been using the suit, too.

But despite James' pleas for her to accept Tom as the perpetrator and move on, Cecilia is determined to confront Adrian about his abuse and murders. She decides to meet him to "reconcile" over dinner at the home they formerly shared. When she arrives, a nervous Adrian explains that he didn't know what she wanted to eat, so he ordered sushi, pasta, and steak. Without hesitation, Cecilia selects the steak and tries to get Adrian to admit that it was really him — not Tom — who was tormenting her the whole time.

When he doesn't, Cecilia begins to cry and asks to use the bathroom. But unbeknownst to Adrian, she secretly slips into the extra invisibility suit she'd stashed in their closet, and returns to the dining room to slit his throat. Cecilia uses the steak knife he gave her for her meal and puts it in his own hand to make it seem like a suicide on the security cameras.

Steak may seem like an innocuous choice for dinner, but as with other moments in the movie, it's really a subtle clue to the movie's conclusion that sets Cecilia free.

Tags: Features, Movie, The Invisible
You may also like
Celebrities News