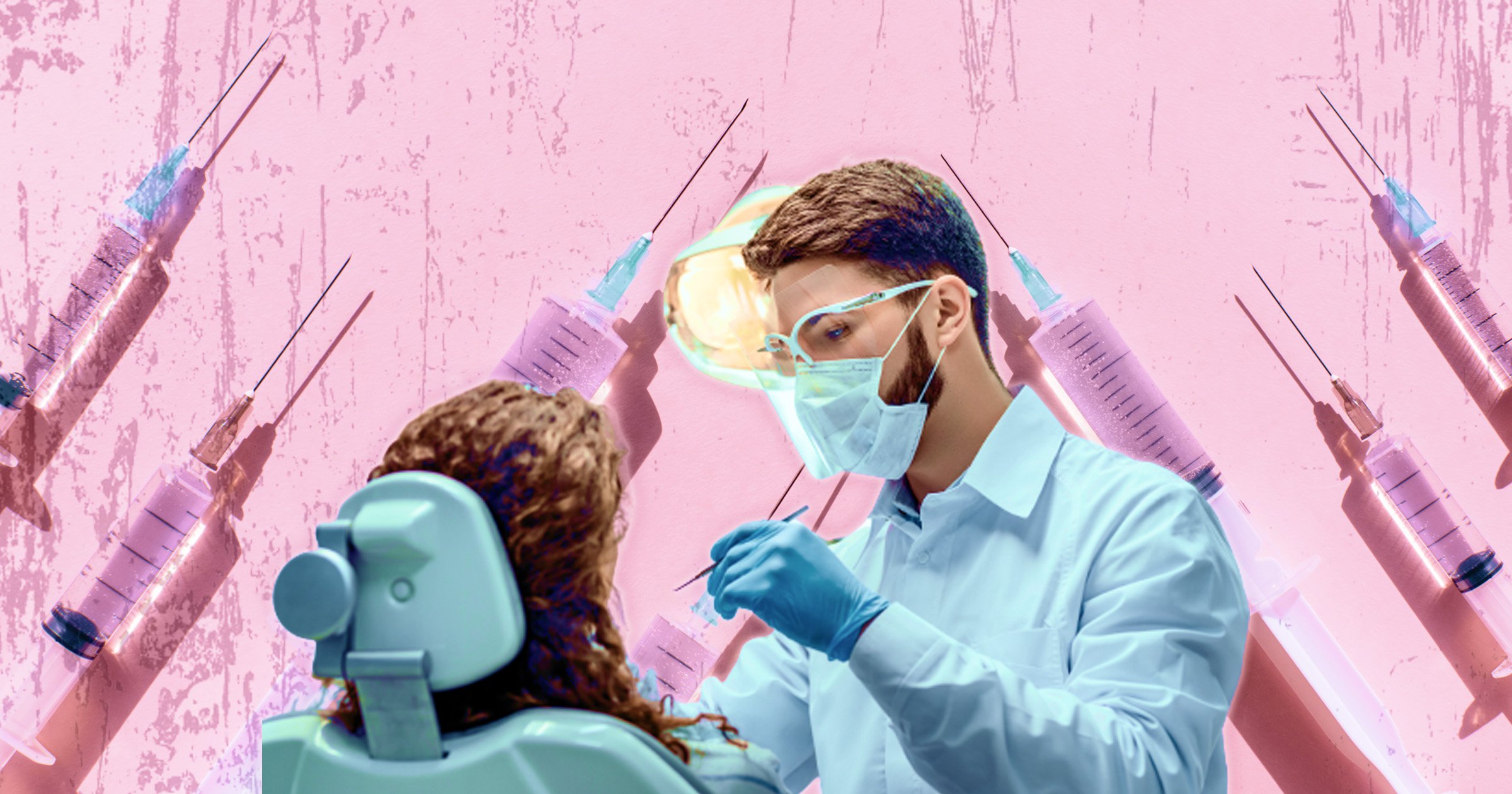 ‘Are you flossing? Do you brush regularly? Do you want to sort out those wrinkles?’

Once upon a time, it would have been considered bizarre to be asked about anything other than your teeth by your dentist.

But these days, it’s becoming more common for your dental checkup to include offers of Botox, fillers, and other cosmetic treatments.

Why? And is it a good idea to get your dentist to treat your anti-ageing desires as well as your molars?

‘In the last five years I do think people are going to the dentist for more cosmetic reasons including fillers and Botox,’ says Ashton Collins, director of Save Face, a national register of accredited practitioners providing non-surgical cosmetic treatments.

But dentists administering Botox is not new: ‘they were actually one of the earlier embraces of these treatments,’ says Ashton. This is because Botox and dermal fillers can help with chronic pain in the jaw, including conditions like temporomandibular joint dysfunction (TMJ.)

‘I found that it does actually help,’ explains Iona Fyfe, a singer from Glasgow who has suffered with ‘excruciating’ and ‘chronic’ pain from TMJ since about 2016. She had tried several other treatment options but nothing worked to help the pain.

In 2021 she ‘finally managed to access one round of Botox on the NHS’. After having the first treatment in hospital she then ‘chose to have it at the dentist because they didn’t have a 6-12 month waiting list’.

‘I could just pay for it and get it done,’ she says. ‘Having it done at the dentist was a convenient albeit expensive route to go down, but I am really glad that it was there because as a singer this treatment was paramount to being able to do my job.’

Despite these medical reasons for needing facial injectables, what is known as aesthetic dentistry has also boomed in recent years.

‘Dentists were routinely administering Botox and then as aesthetic treatments became more popular it became a hand-in-hand service,’ Ashton notes. She believes that for consumers, the dentist might feel like a safer option: ‘If you are already a client at a dentist and you have a relationship where you trust that person, then it’s just an easy progression.’

She says social media algorithms can be a bit of a ‘rabbit hole’ where ‘if you start off on a teeth-whitening journey it’s only a matter of time before you see adverts for lip fillers and Botox’. Collins also thinks the stigma around these treatments is lessening: ‘whereas 10 years ago there was a lot of judgement’ now ‘people under 30 are far more open to discuss that they are having treatments’.

Lauren Harrhy, a dentist from Wales and trustee of the British Dental Association, says the pandemic also had a role to play in increasing demand: ‘Over Covid we all spent more time looking at ourselves on camera and started to realise how we really present ourselves to the outside world.’

She thinks this has made us even more determined to stop the signs of ageing: ‘Many people want to just feel better about themselves. Some want to preserve their youthful appearance and others want to be restored to their previous appearance.’

This is the experience of someone from my local dentist, who tells me: ‘I couldn’t fight middle age’s effect on my face! I decided on fillers and Botox but was worried that I would spend money on little difference or on a frozen face.’

They say their dentist ‘was efficient and calm’, and ‘it was clear he knew what he was doing’.

Like any cosmetic treatment, it’s an individual’s choice to change their appearance in any way but, is it safe for dentists to be administering these treatments? Does dentistry really equip you to inject forehead and lip fillers?

Actually, yes, explains Carmel McHenry, a spokesperson from the British Dental Association (BDA): ‘After five years study at dental school, dentists will have a thorough knowledge of facial anatomy, so they are well placed to provide Botox or fillers.’

Her colleague Laura Harrhy agrees, explaining: ‘Dentists are uniquely qualified to provide injections in a safe and controlled manner. We know the head and neck anatomy better than pretty much anyone.’

Botox is a prescription drug so only a doctor, dentist, prescribing nurse or pharmacist can offer it.

However, Ashton explains that there is a ‘loophole’ in that law that means it is ‘widely flouted’.

‘Although [Botox] has to be prescribed, the healthcare professional can then delegate the administration of that treatment to whoever,’ she explains. ‘So they could prescribe that drug to the patient and get a beauty therapist to administer it.’ This problem is ‘rife’ says Collins, calling on the government to stamp it out.

You also don’t need a prescription to administer other dermal fillers, and illegal injectables imported from abroad are also causing major issues.

McHenry agrees that this lack of regulation means ‘there’s a degree of wild west territory’ and says that the government need to deliver ‘necessary safeguards, not just promises’. She’s referring to the commitment made by the Department for Health and Social Care in February 2022 to introduce a licensing scheme in England for non-surgical cosmetic procedures, including dermal fillers.

A spokesperson from the Department For Health And Social Care assures Metro.co.uk that they ‘are committed to improving the safety of cosmetic procedures and helping consumers to make informed and safe choices’. When asked about when the much-needed licensing scheme, the same spokesperson said the government ‘will set out further details in due course’.

It is difficult to know whether medical Botox treatments like those Iona underwent or rising demand for aesthetic treatments are behind the rise of dentists offering Botox.

Either way, despite the fact the average Brit can hardly afford a three-figure filling these days, at £100-£300 a treatment, tweakments provided by your dentist are certainly making a lot of people a lot of money – so this seems to be a trend that’s firmly here to stay.

Despite my initial scepticism, the research I did for this piece showed me that if you want to have Botox or fillers, the dentist might actually be your safest option – but watch out for untrained individuals selling pre-prescribed injectables or those imported from abroad, and make sure that, as with any treatment, you take time to think things through – rather than making an impulse decision prompted by seeing your face in the checkup chair’s unflattering lighting.