IMAGINE going on a first date and your potential partner suddenly exposed themself to you.

Most women would gasp in horror and bolt for the door — probably giving the creep a cold shower of Pinot Grigio for good measure. 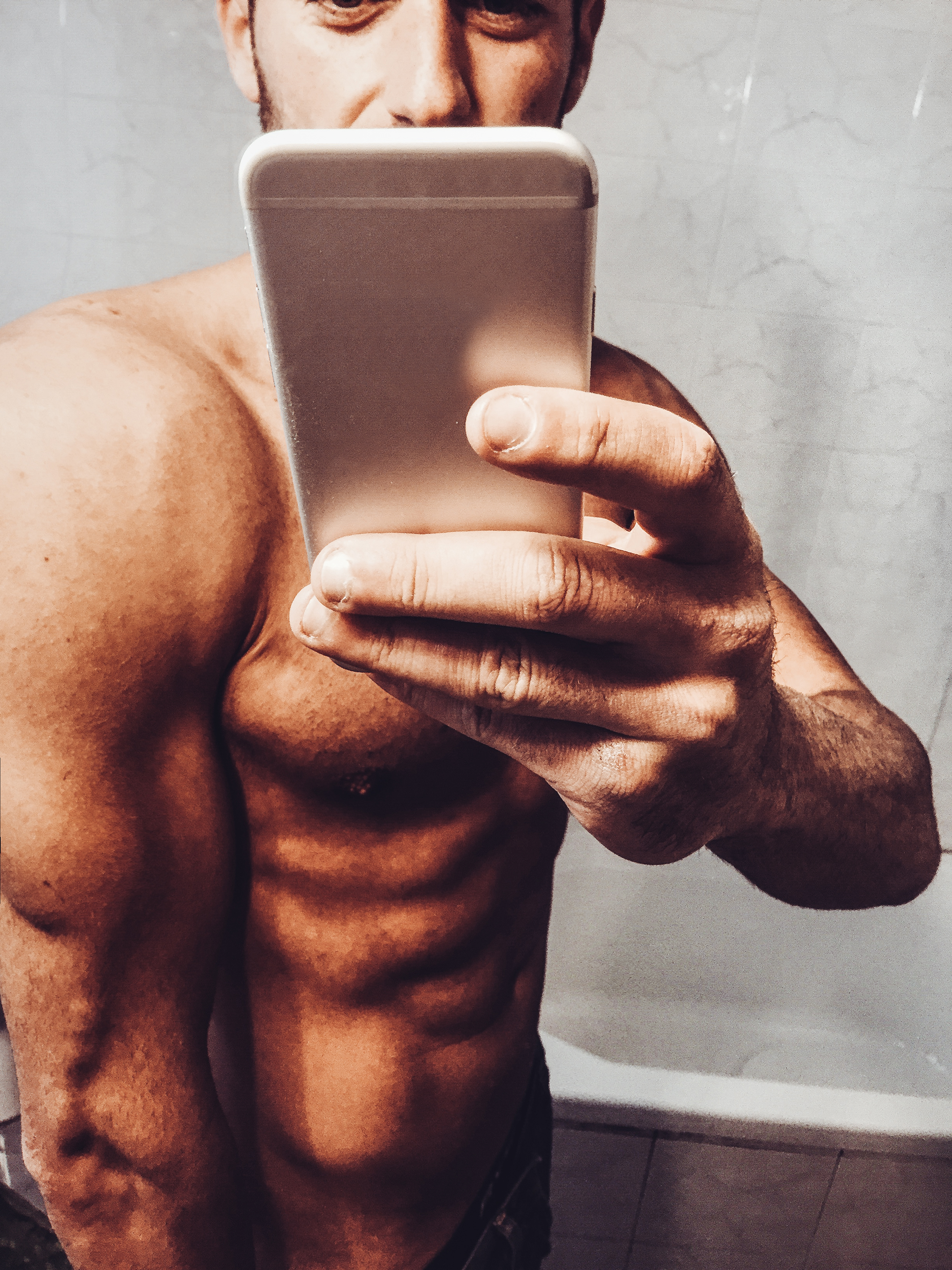 While thankfully rare in real life, seedy situations like this are par for the course online for an increasing number of women.

Cyberflashing is the sending of unwanted explicit pictures, be it on a dating site, social media, or even shared to your phone by a stranger sitting opposite you on a train.

And it’s experienced by women of all ages.

A shocking four in ten women aged 18-34 have been sent an unsolicited sexual photo according to YouGov research.

Lorna McCann, 57, has been sent so many X-rated images online that she’s become resigned to it.

The NHS radiology secretary says: “If a guy pulled down his pants in the pub, I’d say, ‘Sorry, I’m going home’. But they think nothing of sending you a sexual pic of it on WhatsApp. I don’t get it.”

She says: “We began speaking on the dating site Plenty Of Fish and we were getting on so well.

"But when the conversation moved to WhatsApp, he sent me a pic of himself in Calvin Klein hipsters. It looked like he had a rolling pin down the side of his leg — it was obscene.”

In the next shot, he’d taken his pants off. Lorna quickly blocked him.

Another man sent her a snap of himself in lacy black underwear.

She says: “It was the most awful thing I’d ever seen. What did this guy think? That it’d make me want to marry him?”

1 in 4 women feel violated and vulnerable as result of cyberflashing.

The experience left Lorna, from Wimbledon, south London, wondering if something on her dating profile had encouraged this lewd behaviour.

She says: “I was looking to find romance following the end of my second marriage.

"My account was normal, almost boring. I’d said I was adventurous — like when I trekked across America on my own. Not adventurous as in ‘she’s up for it’.”

But even after she removed that word, the sleazy images kept coming.

She says: “The more women I spoke to, the more I realised that d**k pics were the norm.”

After letting one guy down, saying she didn’t think things would go any further, he replied with a picture of his penis and the caption: “This is what you’re missing”.

Now, when the chat moves from a dating site to WhatsApp, she gives a warning: “I tell them I don’t want to see any body parts — send one, and that’ll be the end of it.”

She adds: “The romance has gone out of dating. I feel sorry for younger people who’ve known no different.”

But why do men do it?

Guy sent pic of his penis. I told him that I’d never felt less aroused.

According to new research, motives include attention seeking, sexual gratification, and the desire to humiliate.

“There is rarely a clear, single motivation for cyberflashing,” says Dr Kelly Johnson, an assistant professor in criminology and co-author of Cyberflashing: Recognising Harms, Reforming Laws.

“Even if young men and boys admitted to sending pictures to instigate sex, they also recognise that young women and girls might find it harassing and distressing, but they proceed anyway,”

Karen Whybro, 42, was travelling on the London Underground when she received a creepy image request from a man in his 20s.

Apple phones have an AirDrop facility, meaning a phone nearby can request to send an image to another if it has open settings.

Karen says: “I declined the request, but it came through again. I could tell who was sending it — a guy on his phone sat diagonally opposite who kept looking up to see my response.”

He sent four requests in total.

“I found it very intimidating, even at my age. It’s baffling that he thought this was an appropriate way to strike up a conversation,” says Karen.

“To me, he had the same mentality as a guy who shouts something suggestive at you from a passing car.”

She didn’t dare challenge him for fear of his response.

How dare he send that! I was in hospital as my daughter had given birth.

Even more sinister was when Karen was waiting for her boyfriend in the street and had another AirDrop request.

She says: “I was more fearful then because he could clearly see me, but I couldn’t see him.

“I didn’t know if he was going to approach or follow me.”

Karen, who runs a bridal boutique in Chelmsford, Essex, knows exactly what type of images she would be sent.

She says: “Sometimes I model the wedding dresses on social media and I’ll get comments like, ‘Who’s the tart in the dress?’ followed by flame and aubergine emojis.”

One ‘admirer’ even tracked down her personal Instagram and messaged her a picture of his penis.

She says: “Fortunately, when I opened it, my five-year-old daughter was at her dad’s. But it knocked me off my feet. I was annoyed and angered at the arrogance of it, that this person thought I would want to see this.”

Karen believes this is the thin end of the wedge of toxic masculinity.

She says: “It’s a part of rape culture. If we accept cyberflashing, we set young men on a path to worse crimes. The law needs to catch up with technology.”

It’s hoped that the upcoming Online Safety Bill will make cyberflashing an offence, with the support of the PM.

It knocked me off my feet. I was annoyed and angered at the arrogance.

At a recent parliamentary committee, Boris Johnson said: “I don’t care whether flashing is cyber or not, it should be illegal.”

Dating app Bumble pushed for a law change Stateside, and two years ago Texas made cyberflashing a criminal offence, punishable with a £375 ($500) fine.

The app is urging the UK government to follow suit.

Nina Elmi, Bumble’s head of public policy in Europe, says: “Our research and several studies have shown that there’s an enduring impact from cyberflashing on a victim’s sense of safety offline and their mental health.”

She adds that 28 per cent of women surveyed believe cyberflashing has in­creas­ed since the pandemic. “This is why we’re calling for it to be criminalised.”

It’s something Caroline Duddridge, 62, would welcome.

When the gran-of-six from Cardiff reconnected on Facebook with an old flame, he asked if she’d like to see an “adult picture” of himself.

She says: “I replied, ‘That would be lovely!’ thinking it would be a normal pic since we hadn’t seen each other in so long.”

What came through wasn’t what she was expecting.

“I was so shocked and said to him: ‘How dare you send that?!’ I was in hospital as my daughter had given birth and she saw my face drop.”

Caroline believes men do it to shock.

She says: “It’s a power thing. They’re careful not to appear predatory in person, but think they can get away with it online.” 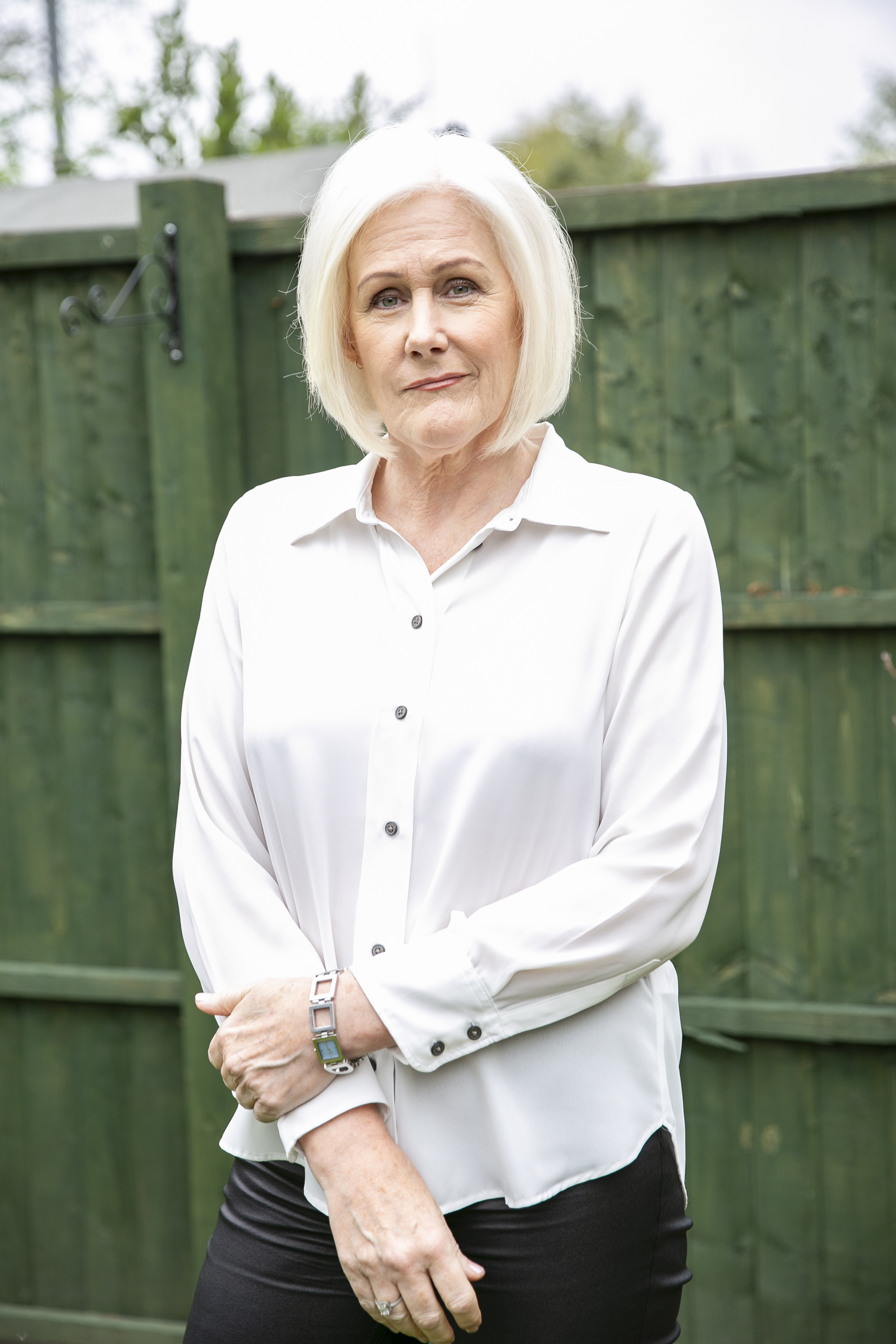 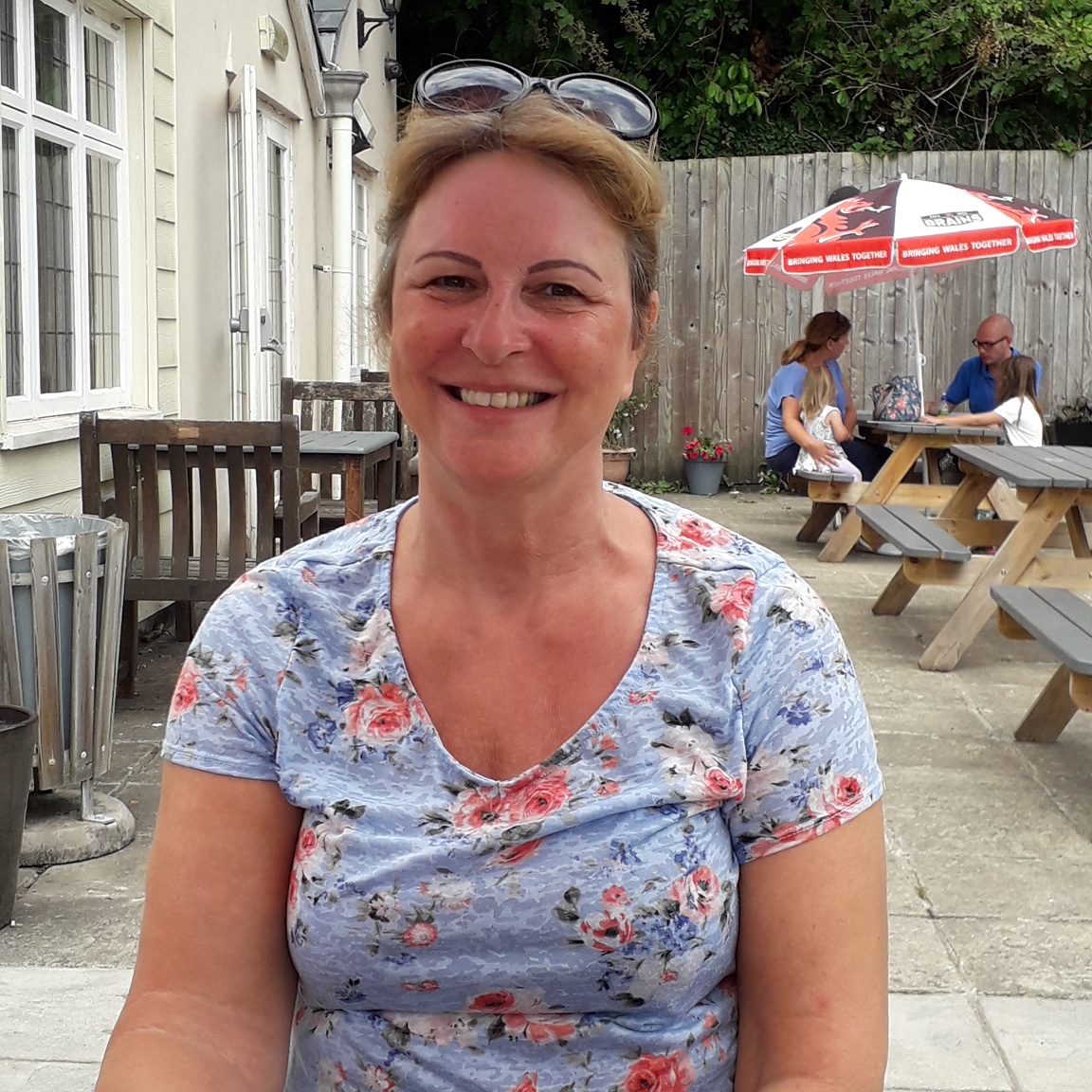 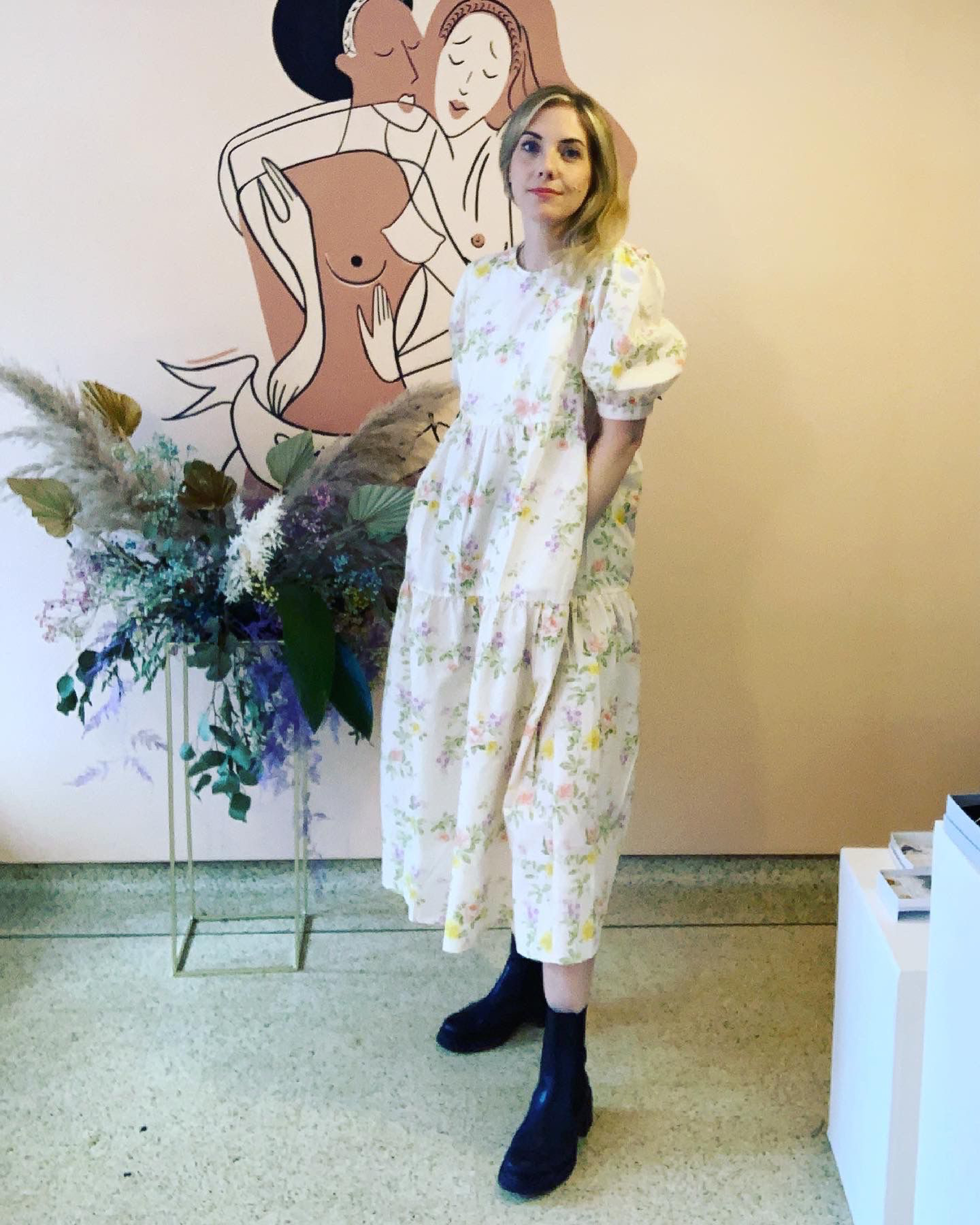