A MUM has issued a stark warning to those desperate for a tan after getting skin cancer from just three months of using sunbeds.

Lucy Hartland turned to beds for 15 minutes a day after being fed up with streaky fake tan from a bottle. 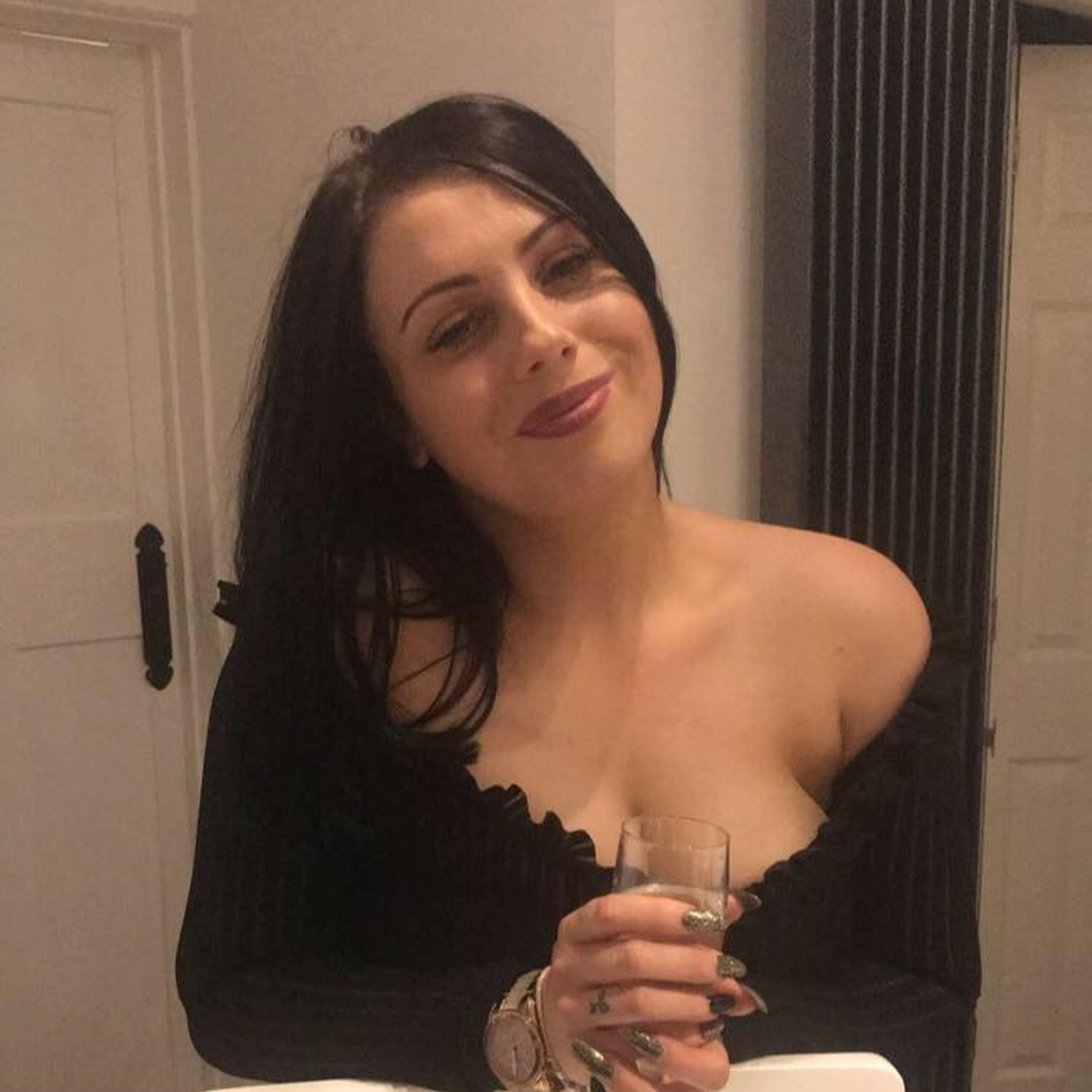 But the 29-year-old now regrets her decision after developing melanoma skin cancer within just three months, which started as a tiny mole on her leg.

She had to get the skin cancer scraped out and then the crater covered with a skin graft, suffering skin infections during her recovery.

Now with a scar on her leg, the former nursery nurse won’t wear dresses or skirts.

Lucy, from Gloucester, Gloucestershire, said: "I just wanted to get a lush tan. I didn't have a clue about the risks, I was so naive.

"I wasn't comfortable in the colour of my skin, I wanted to get a tan and get it quick.

"I've had the all-clear, the melanoma is completely gone, and I have check-ups every three months but I've just got to be very careful in the sun now.

"My advice to tanaholics would be to not go on sunbeds, it's not worth risking your life for a tan.”

According to the World Health Organisation, sunbeds are as dangerous as smoking.

Like the sun, they give out harmful UV rays, that damage the DNA in your skin cells – which over time, can lead to malignant melanoma – the deadliest form of skin cancer.

Lucy, mum to three-year-old daughter Marnie Rooney, has naturally pale and freckly skin but was desperate to get a “lush tan” for a confidence boost. 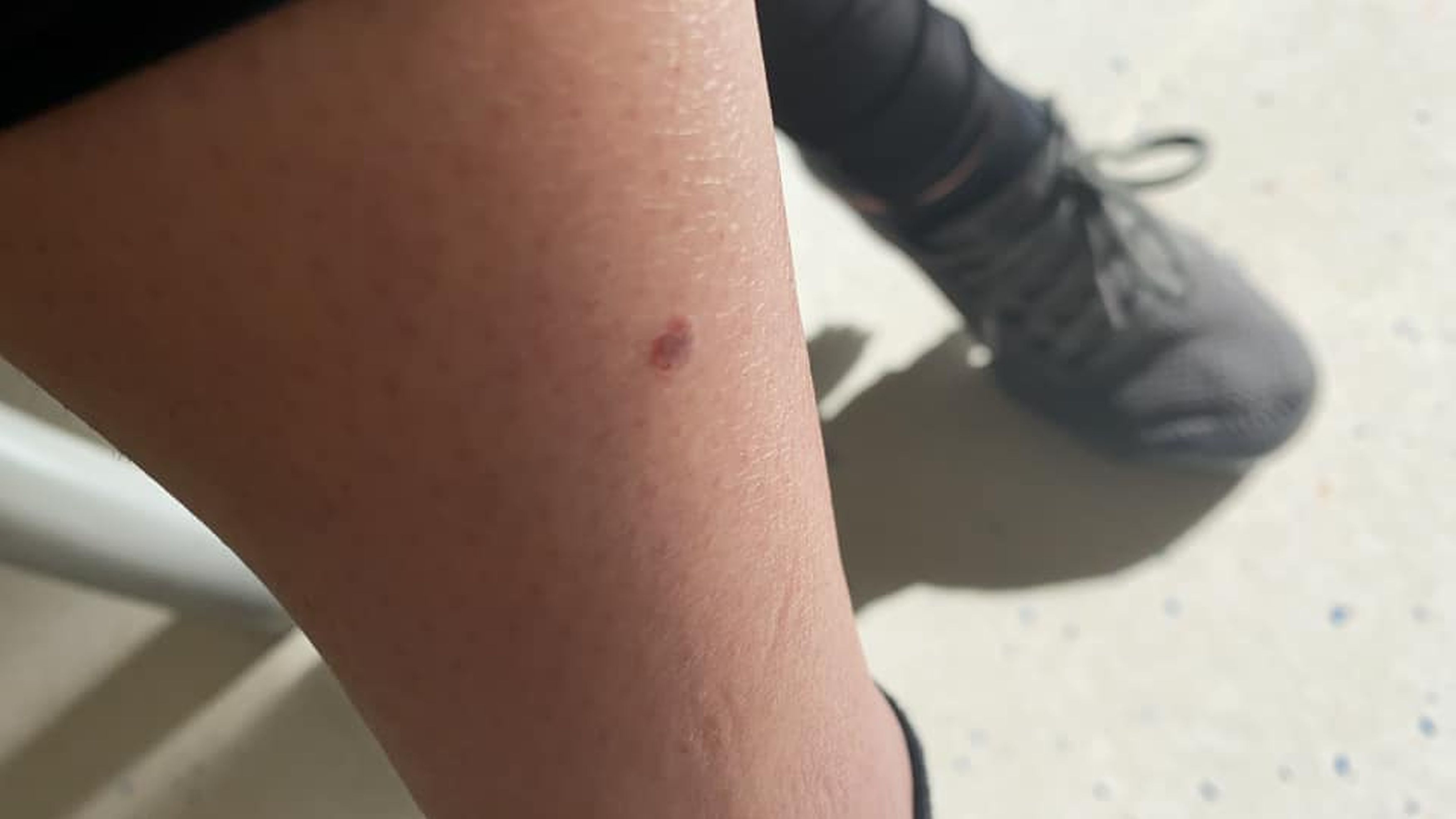 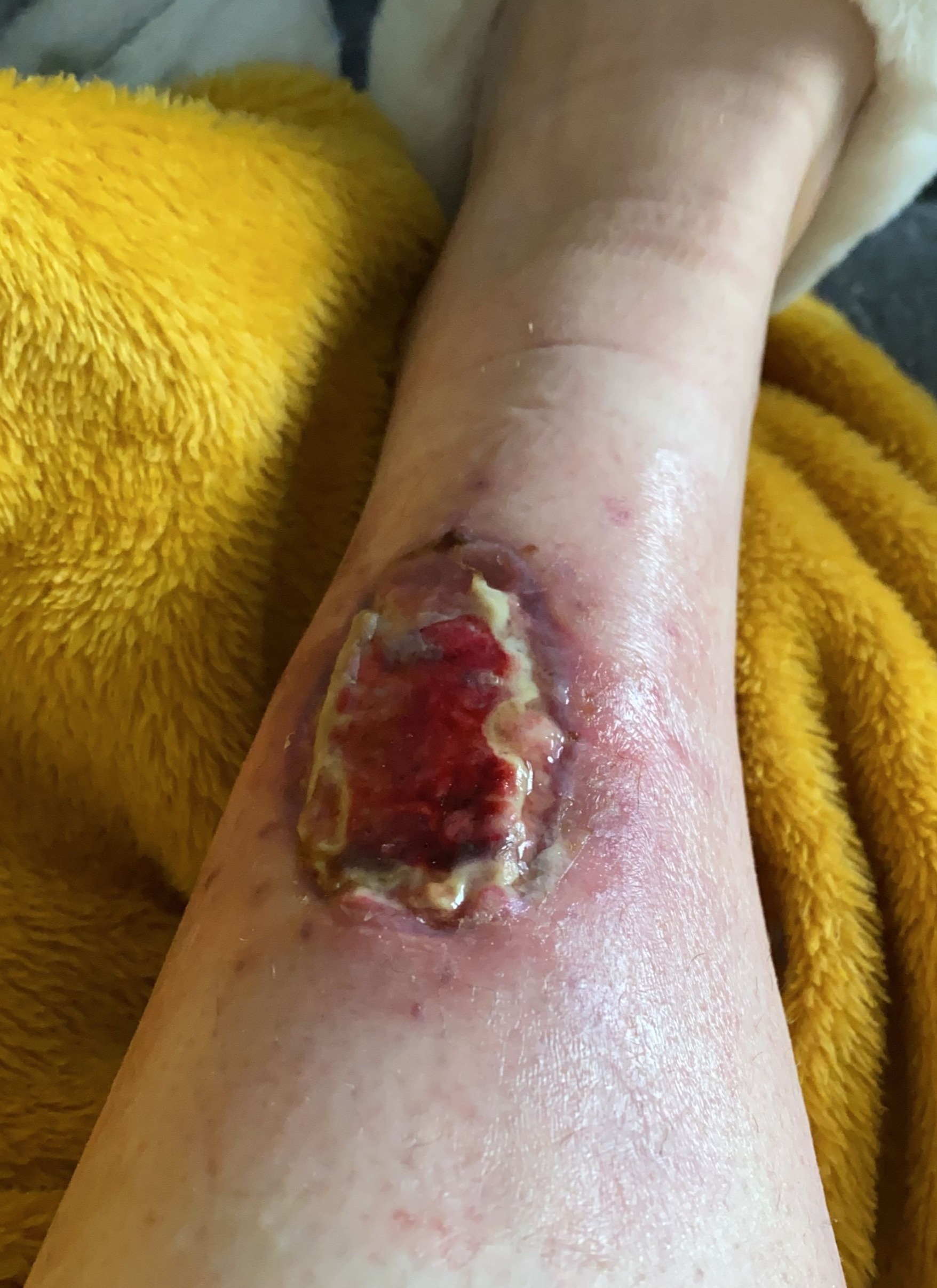 She tried a variety of fake tan products that offer instant or gradual darker skin. But they didn't give Lucy the long-lasting glow she wanted.

Lucy finally opted to slather on tan accelerator, which speeds up the tanning process, and hop on sunbeds for 10-15 minutes a pop daily, starting last April.

The mum-of-one said: "As the fake tans weren't working I just thought it would be a better route to try sunbeds.

"I rented a sunbed for at home and I bought a 60-minute package at a tanning salon, which I paid £40 for.

"I didn't have a clue about the risks. I was putting on any sort of tan accelerator when I got on a sunbed.

"It didn't hurt, it was like having a ten-minute holiday it was lovely.

"When I started going on the sunbeds I would see the results instantly. My skin looked better, my teeth looked whiter, everything was just better. It was a massive confidence boost having a tan.”

After just three months of daily sunbathing sessions, Lucy spotted what she described as a new and “ridiculously small mole” on her left shin and went to the GP.

She was referred to the skin clinic at Gloucestershire Royal when specialists assessed the mole, as a new or changed mole is the first sign of melanoma.

They removed it during a 30-minute procedure and sent it off for a biopsy to look for cancer. 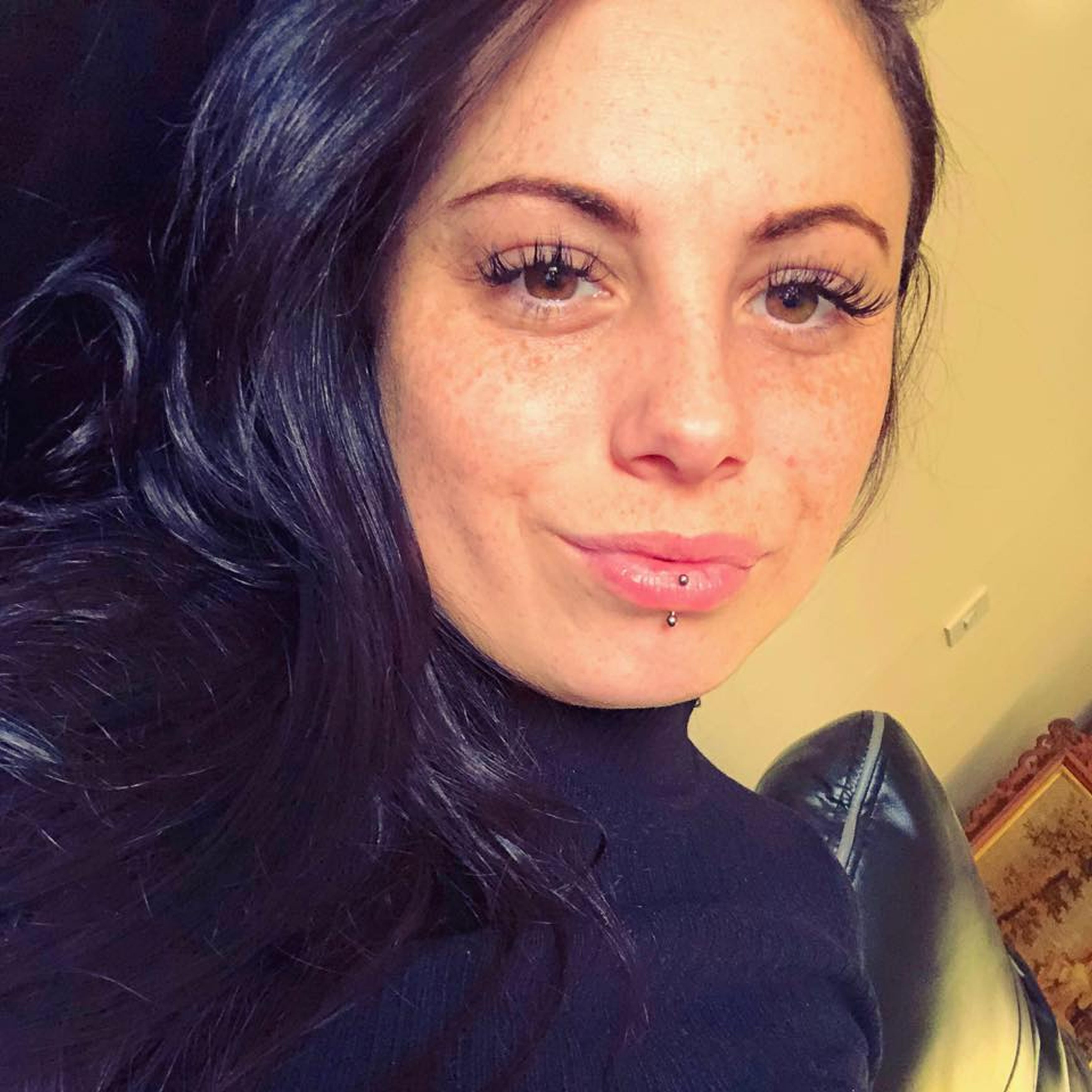 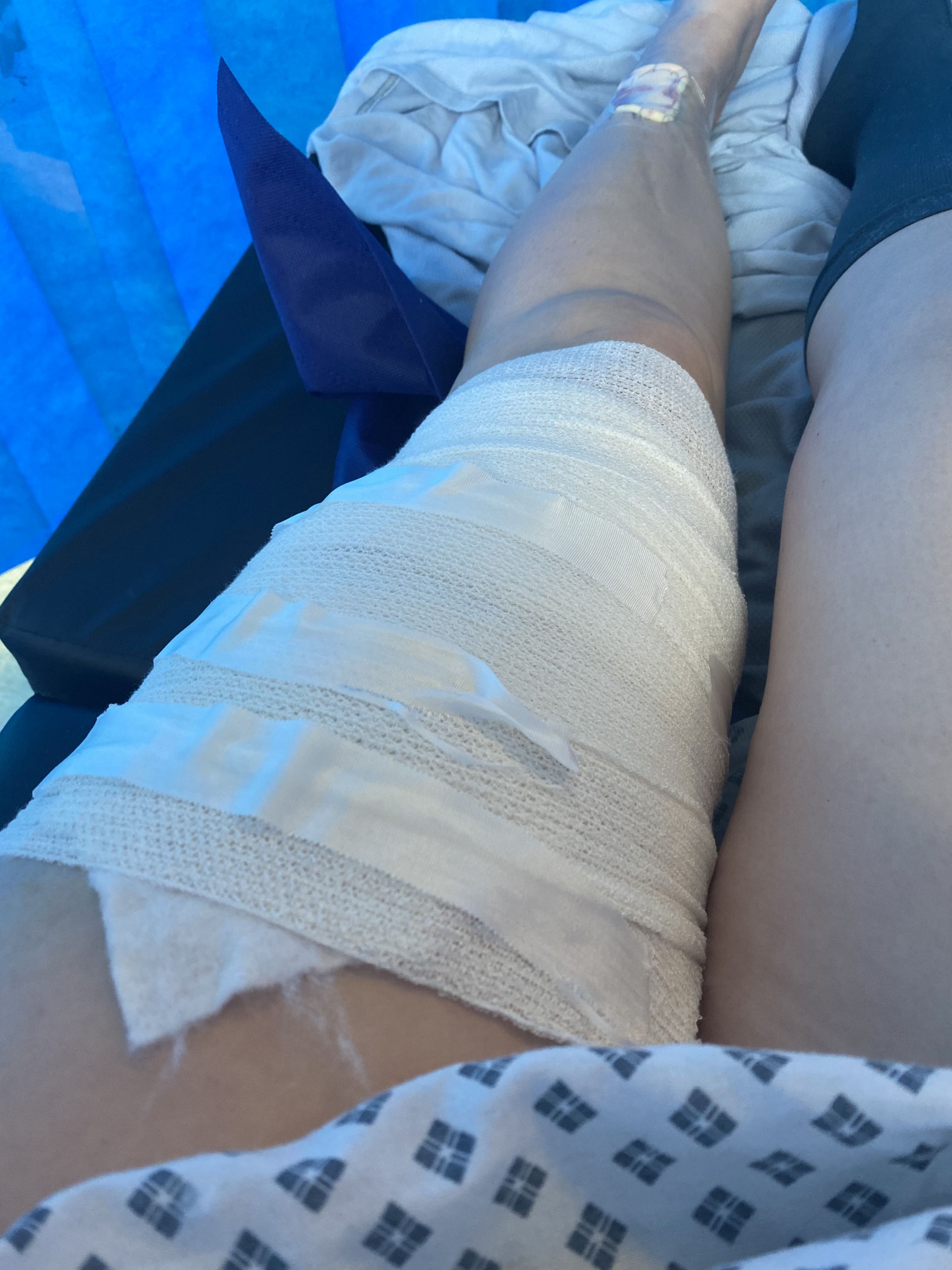 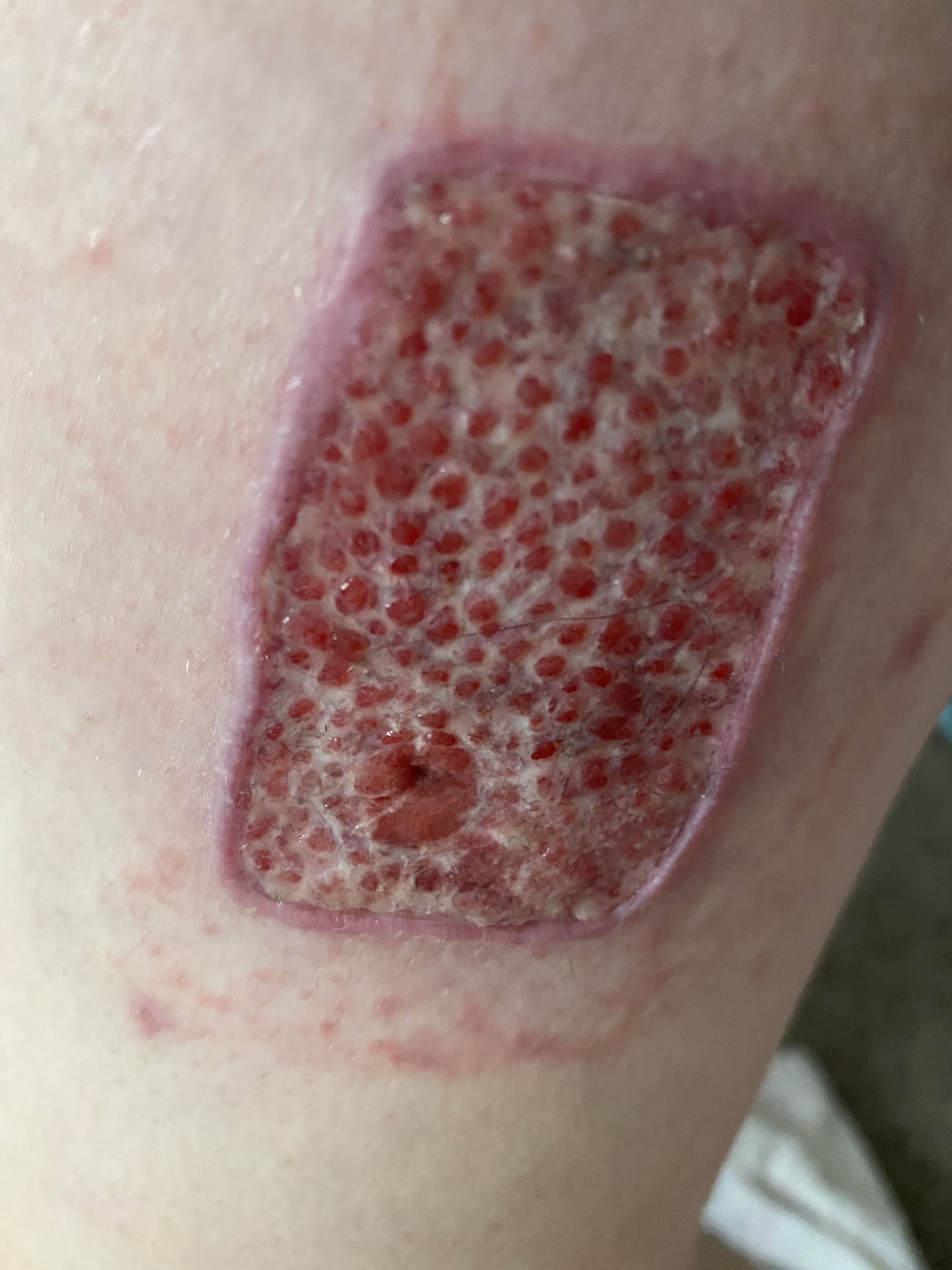 Skin cancer – what are the risks?

Melanoma skin cancer is the fifth most common cancer in the UK with around 16,000 new cases diagnosed each year.

It is getting more common, thought to be because people are going abroad for holidays.

More than 2,300 people die every year in the UK from melanoma. Most people (80 to 90 per cent) are monitored for one to five years after treatment and are then discharged with no further problems.

More than one in four skin cancer cases are diagnosed in people under 50.

Melanoma can spread to other organs in the body and so it is the most serious form of skin cancer.

The most common sign of melanoma is the appearance of a new mole or a change in an existing mole.

In most cases, melanomas have an irregular shape, are more than one colour, may be itchy or bleed and gradually change shape, size or colour.

Because of these risk factors, the easiest way to reduce risk of melanoma is to wear sun cream all year round, avoid the sun in the middle of the day and avoid tanning beds.

Non-melanoma skin cancer refers to a group of cancers that slowly develop in the upper layers of the skin.

Around 147,000 new cases of non-melanoma skin cancer are diagnosed each year.

It affects more men than women and is more common in the elderly.

The first sign of non-melanoma skin cancer is usually the appearance of a lump or discoloured patch on the skin that persists after a few weeks and slowly progresses over months or sometimes years.

In most cases, cancerous lumps are red and firm and sometimes turn into ulcers, while cancerous patches are usually flat and scaly.

Sources: NHS and the Mayo Clinic

Less than a week later Lucy was told she had stage 1A melanoma, the earliest form of the most common and serious type of skin cancer.

She said: "The skin specialists took one look at it and they removed it that day and sent it off for a biopsy.

"Less than a week later they sent me a letter asking me to come in for a chat that said 'bring someone with you'.

"I remember thinking 'oh god this doesn't sound too good' so I took my sister.

"When they told me I had it, I had no idea about it. I read up about it when I got home and I just thought 'I've got a child, what am I going to do if this gets worse?'”

Lucy underwent a second surgery where she had a skin graft to cover the crater left in her leg where the mole had been taken out.

She said: "[After the operation] I had an infection in my leg so I didn't recover very well.

"I was always in and out of the hospital and I was on antibiotics for a couple of weeks to get rid of the infection. Now it's healed but it doesn't look the best.

"It's left a crater in my leg that's very deep and there's a big scar.

“At the top of my leg I've also got a scar from the skin graft site, so I won't be wearing any skirts or dresses.” 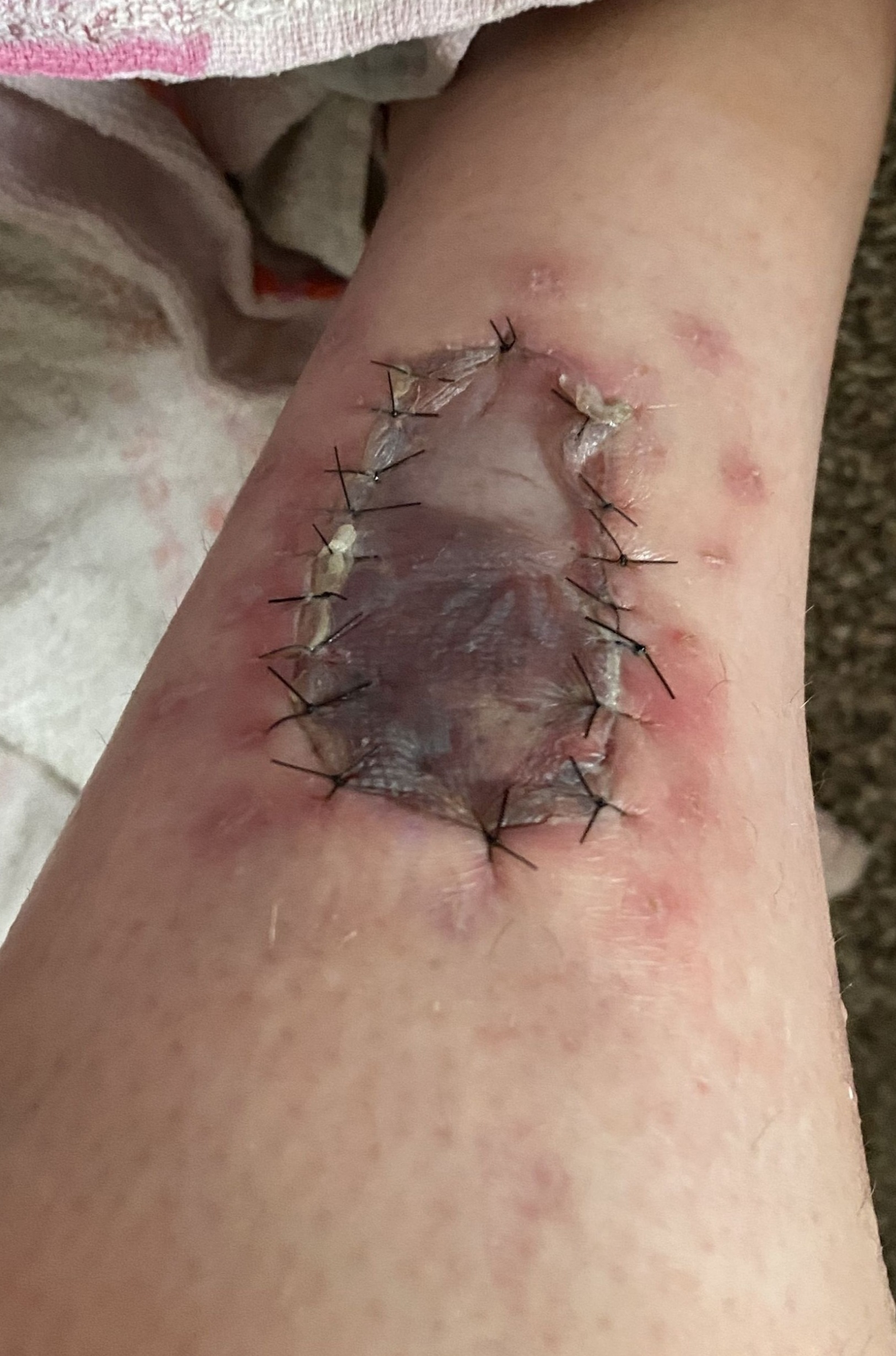 Should you get sunbeds?

Some people are more at risk of melanoma skin cancer than others.

The NHS reports that you should not use sun beds, sunlamps or tanning booths if you:

Having been given the all-clear, and never leaving the house without factor 50 on, Lucy is urging tanaholics to ditch sunbeds and embrace fake tan.

She shared her experience in a Facebook post in January, begging her friends to ditch the sunbeds.

The post read: "WARNING PICTURES ARE NOT FOR THE FAINT HEARTED.

"28 with skin cancer?? That wouldn't ever happen to me all because of a sunbed??!!

"Having to deal with this isn't easy but it's got to be put out for others to realise!

"You all wanna go on a sunbed and get a lush tan yeah? So this is the aftermath of my skin graft and removal of my cancerous mole… I am nowhere near the recovery I should be and now have infected leg maybe having to have another operation. I am on bed rest for the next three days, I can't even have my own daughter rn [right now] due to the medication I am on.

"If this isn't a lesson learnt to others and an eye opener nothing will be! Do your research, understand the UV! Please let this all be a lesson be safe!!!"

Lucy said: “I decided to share my experience because people don't understand the dangers of it, it can happen to anyone.

"I didn't think of the risks, I didn't care if I got burned and I would never ever think to use sun cream. Now I put factor 50 on my legs once a day.

"It's scary it happened in just three months. I've had the biggest wake-up call, it makes you look at life so differently."

Tags: Cancer, diagnosed, Mum, skin, with
You may also like
Celebrities News