Meghan Markle and Prince Harry, known as the Duke and Duchess of Sussex, received a standing ovation from attendees at the Mountbatten Festival of Music held at the Royal Albert Hall in London. For the evening, the Duchess of Sussex wore a head-to-toe red outfit worth nearly £3,000, while her Prince co-ordinated with her in his red Captain-General of the Royal Marines dress uniform.

Meghan Markle, who arrived at Royal Albert Hall with a huge smile on her face, wore a full-length red Safiyaa dress, jewelled Simone Rocha earrings, and a pair of gorgeous red Aquazzura heels.

The Duchess opted for a full red-on-red look, matching her dress, accessories, and shoes to each other.

The Safiyaa red dress is known as the “Kalika” and retails on the official Safiyaa website for £1,295.

Meghan’s “Kalika” dress features a gorgeous shoulder cape silhouette, back drape detailing and a back slit around the lower leg. 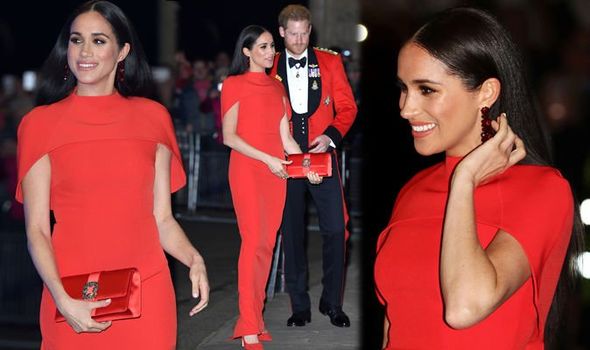 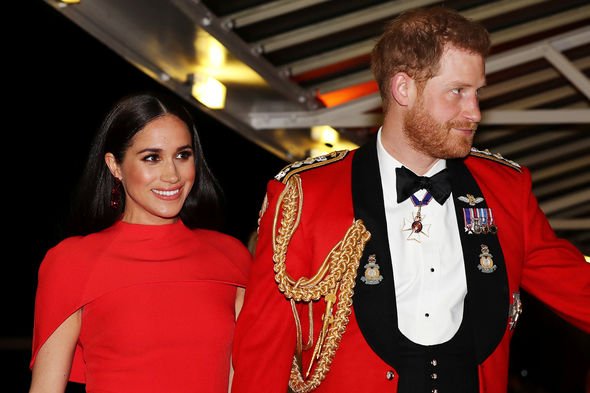 On the Safiyaa website, the dress is described as a “raised collar long dress with shoulder cape and back drape detail in Scarlet Red heavy crepe.”

The Duchess chose to accessories her head-to-toe red look with a beautiful satin clutch bag by Manolo Blahnik that featured jewel embellishments on the front.

Adding some further glamour to her evening look, the Duchess of Sussex opted for a stunning pair of dark red Simone Rocha drop-earrings. The earrings retail online for £195.

To finish off her look, the Duchess opted for a pair of red Aquazzura suede pumps, which retail online for £470, that added a few extra inches to her petite 5-foot 6-inch frame.

Keeping in theme with the evening of glamour, Meghan Markle chose to leave her straightened hair down, tucked behind her ears and swinging freely across her back.

The hairstyle chosen by the Duchess of Sussex for the evening differs from the voluptuous natural hairstyle she usually prefers.

Her makeup for the evening was equally glamorous.

She chose a dark smokey eyeshadow, with added flakes of gold brushed across her eye-lids. 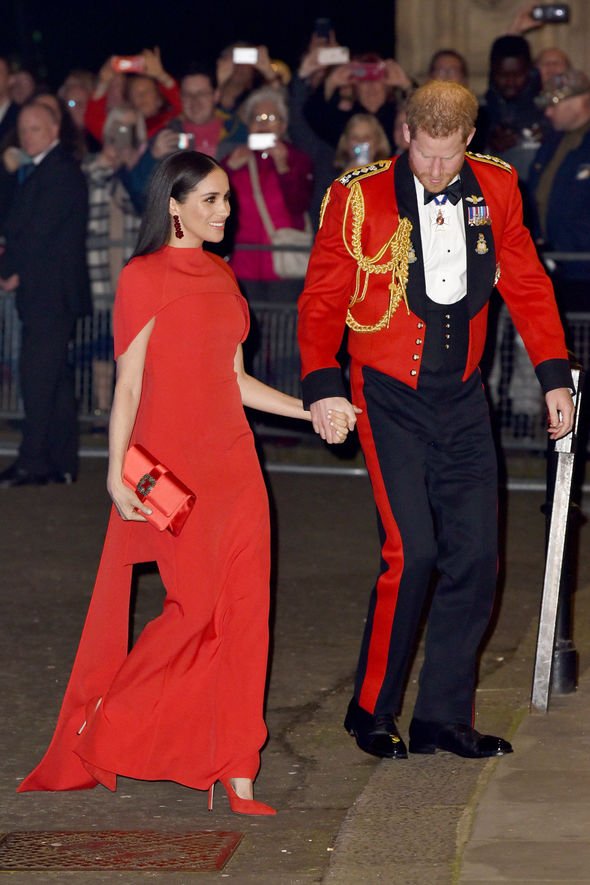 She accentuated her eyes with a coat of mascara and a sweep of eye-liner.

The Duchess also decided to contour her face and used warm blusher to rouge her cheeks before then brushing golden highlighter across her face.

Finally on her lips, Meghan decided to wear a tinted lipgloss.

Sticking close to the Duchess, Prince Harry appeared to be in good spirits as he attended Saturday’s festivities.

Coordinating with his wife, Harry opted for his red Captain-General of the Royal Marines dress uniform. 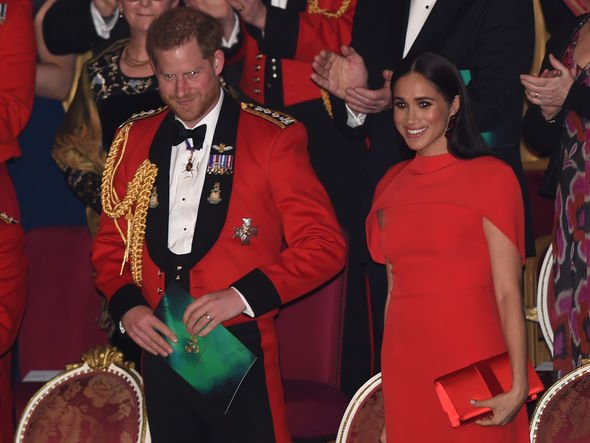 The outfit was made up of a crisp white dress shirt, a black bow tie, a red military-style jacket – showing off the Prince’s medals, and a pair of black trousers with a matching red stripe across the side of the trousers.

Currently, the Sussexes are carrying out their final engagements in the UK before they step back as senior royals on 31 March.

The festival, which sees members of the Royal Marines showcase their musicianship and pageantry, takes place over two days. It is marking the 75th anniversary of the end of the Second World War.

It is also marking the 80th anniversary of the formation of Britain’s Commandos. Proceeds are going to the Royal Marines Association – The Royal Marines Charity and cancer support charity CLIC Sargent.

On Sunday, Meghan Markle is expected to complete her final engagement as a royal when she attends an event to mark International Women’s Day.