The Kar-Jenner ladies have been on fire lately with some of their sexiest outfits ever. Kourtney Kardashian showed off a plunging black suit with a thigh-high slit, which caught Travis Barker’s eye.

Kourtney Kardashian was having a blast inside of a wardrobe closet on Nov. 19, sharing a series of photos to her Instagram. It looked as if she could be getting ready for a photo shoot, as there was a variety of different outfits on the racks behind her, and plenty of colorful shoe and boot options in a wide range of styles. The 41-year-old flaunted her killer figure while modeling a sexy black power suit. Her black blazer had a deep plunging neckline that went down to her waist, and Kourt wasn’t wearing anything underneath it.

The matching black skirt had a tall slit up to her left thigh. Kourtney wore sheer dark stockings with the look, and seemed to have matching black sheer gloves on her hands. The mother of three got super playful in the pictures, showing off all kinds of moods. In one snapshot, she unbuttoned her blazer and held it open to flaunt her amazing decollitage, while closing her eyes and giving a sexy pout with her lips.

In another photo, Kourtney was seen laughing with a tall blonde pal who seemed to be wearing the identical suit, but in white. She too did not have anything on underneath her blazer, but matched with the same sheer black panty hose. Unfortunately Kourtney did not tag the designer in her photos, as fans in the comments were begging to know who made the chic suit. 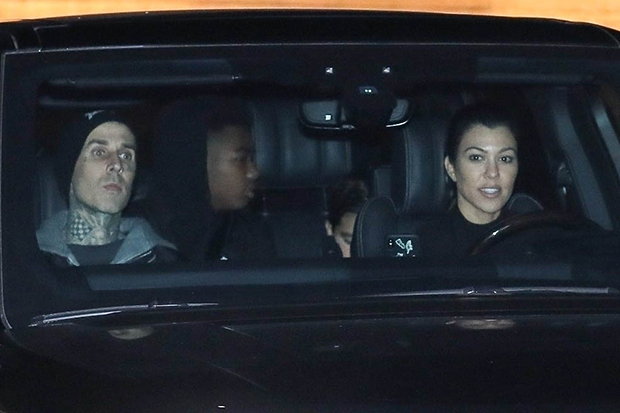 One person who took notice of how incredibly hot Kourtney looked was Blink 182 drummer Travis Barker. The 45-year-old left a series of flame emojis in the comments of Kourt’s post to let her know how on fire she was. That caused fans to cheer on a possible relationship between the two Calabasas residing pals. User @brunettedudettejena told him “@travisbarker y’all should date. Just sayin,” while fan @mandi_bee_ wrote, “@travisbarker I hope you sliding in @kourtneykardash DMs.”

Travis and Kourtney have sparked dating rumors in the past. He joined her for a Sept. 23 workout at her Calabasas estate, which she shared via Instagram. The two had chilled together during hangouts in 2018 and 2019, albeit with their children on playdates. But Travis’ extra flirty comment over how sexy Kourtney looked might mean that something more could be brewing between these two.