Jordyn Woods turned some heads in this eye-catching, barely there gown for her 24th birthday party! The influencer as joined by BF Karl-Anthony Towns at the bash.

Jordyn Woods stunned in this super sexy look! The freshly minted 24-year-old opted for a barely there chain dress, adorned with crystals by AREA, for her lavish birthday party at The Nice Guy on Saturday, Sept. 18. Jordyn opted to wear nothing underneath the risqué ensemble, which she looked absolutely incredible in. The star paired the dress with a pair of Amina Muaddi‘s viral Cinderella inspired heels with a flared heel and crystal details. 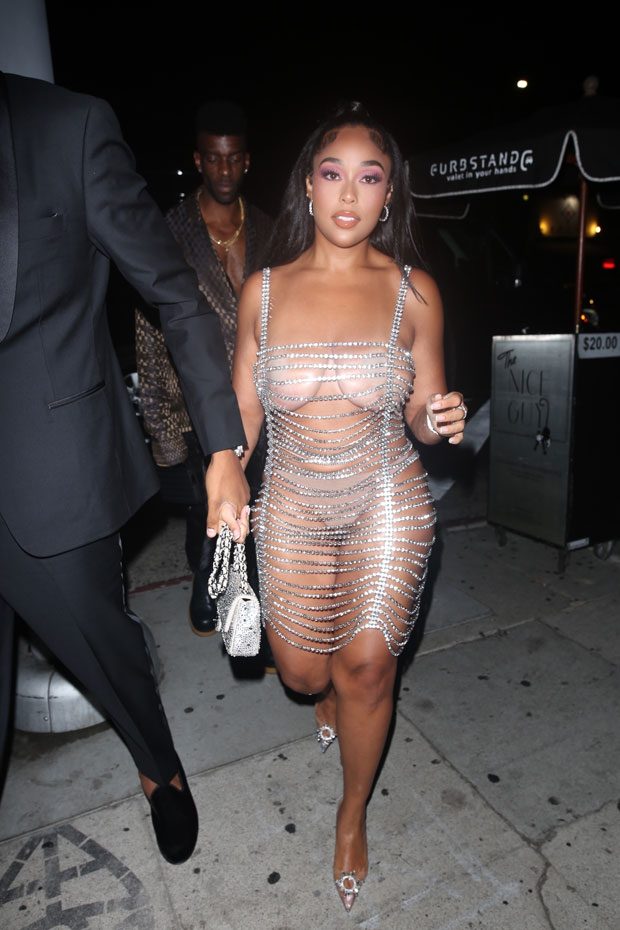 The California native also rocked a mini crystal-covered Chanel flap bag and diamond watch to tie the 1920’s inspired ensemble together. Her glam was also on point, as she rocked long hair extensions to create beach-wave mermaid effect, along with a half ponytail. Jordyn added a pop of color with a dramatic purple eye shadow, keeping the rest of her face bronzed and neutral with a dark nude glossy lip and plenty of highlighter.

Jordyn was joined by her boyfriend  Karl-Anthony Towns, 25, who held her hand as they headed into the celeb-friendly venue. The NBA star was beaming as he assisted his leading lady out of a large black SUV, looking dapper in a black tuxedo, bow tie and crisp white shirt. Karl-Anthony ditched the socks with his stylish smoking slippers, adding a touch of glam with a diamond watch to match Jordyn’s outfit.

Recently, the YouTube star and FRSTPLCE Fitness founder and basketball player opened up about how their relationship went from friendship to romantic. “It just so happened, the COVID came and kind of brought its challenges and it kind of forced us to either pick where our relationship was going to go as friends or something more…And we chose the latter,” Karl, who lost his mother and several other family members to COVID, explained in an Instagram video. The two went Instagram official following Jordyn’s 23rd birthday last year.

Jordyn’s family, including gorgeous mom Elizabeth Woods and her look-a-like little sister Jodie, 16, were also in attendance for her 24th in Los Angeles. The teenager went for a slightly more casual look with jeans and a blue bodysuit, accessorizing with a black hourglass bag by Balenciaga and a pair of black leather Bottega Veneta slides. Friend Shantel Jackson was also spotted heading into the private bash, sporting a pair of Christian Louboutin sandals and a red mini dress.