Is Ita Buttrose the first ABC chair to walk a fashion week? Likely, but she welcomes it.

"It's good to show that even at the ABC we have an appreciation of beauty and fashion," she laughed with a COVID-19 conscious elbow bump after closing the Priceline Beauty Runway at the Virgin Australia Melbourne Fashion Festival on Wednesday morning. 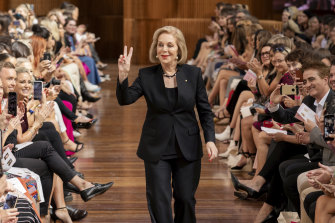 In a festival first, 26 women from different walks of life waved, danced and sung – the soundtrack included Lizzo and Destiny's Child – to showcase hair and makeup, all dressed in black suits by Effie Kats.

Rather than clothes, at a "beauty runway" the focus is on the face. Additional screens installed along the walls of the Royal Exhibition Building showed women from the waist up, highlighting the brightly coloured eyes and lips of the models, who included celebrities, charity workers and one of Priceline's own pharmacists.

For Buttrose, who walked the runway with the likes of radio host Chrissie Swan, comedian Tanya Hennessy and chef Poh Ling Yeow, today's beauty industry is very different from when she was the founding editor of Cleo in the 1970s. 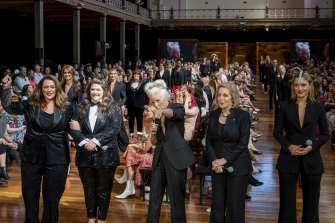 "I don't think we would have seen something like this decades ago," Buttrose said.

"We tended to be more traditional in how we presented looks and how we talked about beauty.

"There's a much better acceptance now … that we are all beautiful and should make the most of our own look."

Although Buttrose, who is patron of Priceline's Sisterhood Foundation, said the jubilant runway was traditional in a sense: "In the past models did actually smile when they were wearing clothes. And I actually wonder why they don't smile now – they look miserable."

Sarah Laidlaw – Priceline's makeup and hair director who designed the hair and beauty looks worn on Wednesday's runway – said diversity was a beauty "trend" that was not going anywhere.

"Trends have become larger: it's not just telling someone to wear one colour or do one shape … the trend might be blue eye makeup, but you don't have to wear blue eyeshadow up to your eyebrow, you do what works for you."

Earlier this month Buttrose was watching some equally fierce makeup looks at a different parade: the ABC's debut at Mardi Gras.

"When I got to the ABC a year ago and I discovered we didn't have a float at Mardi Gras and I couldn't think why," she said, noting she had a long history with the parade from her time chairing the National Advisory Commission on AIDS.

"We have a large number of homosexual men and women in our organisation, and transgender people, and to be in Mardi Gras is a very important activity for them all; it was a lot of fun."

The Priceline Sisterhood Foundation was founded in 2010 to raise funds for multiple causes including Dementia Australia, of which Buttrose is ambassador.

The reporter travelled as a guest of Priceline.

Tags: Don’t, have, I, s, think, We, would
You may also like
Celebrities News