So regal! Elle Fanning channeled the historic character from her series ‘The Great’ with a gorgeous lavender gown by Vivienne Westwood.

Elle Fanning looked like true royalty for the Independent Spirit Awards. The 23-year-old actress stunned in a show stopping Vivienne Westwood couture made of a lilac and gold silk with a pretty pearl strap detail in photos taken by photographer Gareth Gatrell. Elle’s custom look was clearly inspired by her series The Great, in which she plays the Empress of Russia Catherine II who reigned in 1700’s. She paired the dress with a three-layer pearl choker adorned with a cross, which was a nod to the real-life Catherine’s love of the ocean jewels.

The actress — who was nominated for ‘Best Female Performance In A New Scripted Series’ for her role in the Hulu series — looked incredible in the corset-cut design, which is a signature design of the label. The bottom portion of the midi-length gown featured a pretty draping detail, adding to the ultra-feminine vibe of her look which was styled by Samantha McMillen. She rocked a gold metallic heel to finish the look, along with a broken pearl necklace hanging off her shoulder to the left. 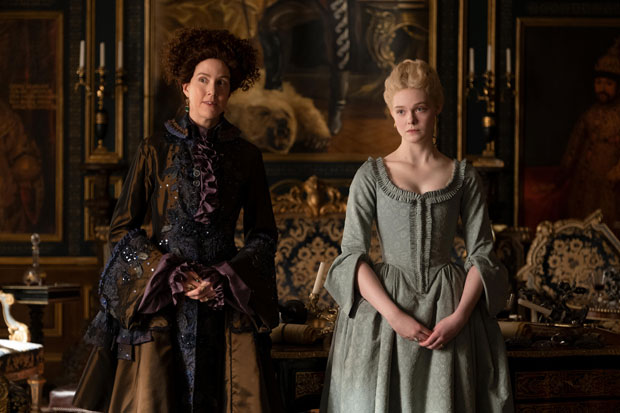 “For the Independent Spirit Awards, Vivienne and Andreas reached out about designing a dress inspired by Catherine the Great’s love of pearls!” Elle penned in her caption, mentioning Westwood’s husband Andreas Kronthaler. “And we all know no one does a corset like Westwood!! Love you both,” she wrote. On another snap of the full length look, she simply wrote, “Sketch.”

The blonde kept her hair center parted and in a sleek glow blowout for the glam night which was styled by hair guru Jenda Alcorn. She opted for a dewy makeup look by artist Erin Ayanian Monroe, who opted for an avant garde approach to Elle’s black liner that was placed slightly below her eyes. Elle’s skin was radiant for the images with a pop of rose blush and a neutral glossy lip. Elle’s followers couldn’t get enough of the photos, including Vanessa Hudgens who gushed “STUNNNNED.” Others wrote, “The pearls! The eyeliner! Huzzah!” and “a true Queen (irl).”

Tags: Elle Fanning
You may also like
Celebrities News