Christina Aguilera slithered into this party celebrating her new single ‘Pa’ Mis Muchachas’ showing off a fiery red hair do.

Christina Aguilera, 40, looked incredible as she headed to a party celebrating the release of her new single ‘“Pa’ Mis Muchachas.” The superstar slithered into the soirée rocking a skintight snakeskin printed catsuit along with a matching jacket on Saturday, Oct. 23. She was still rocking the bright red hair from the music video, giving us some serious Wilma Flintstone vibes, along with her bright orange nails. She finished the look with a large pair of oversized sunglasses and a barely there flipflop sandal. 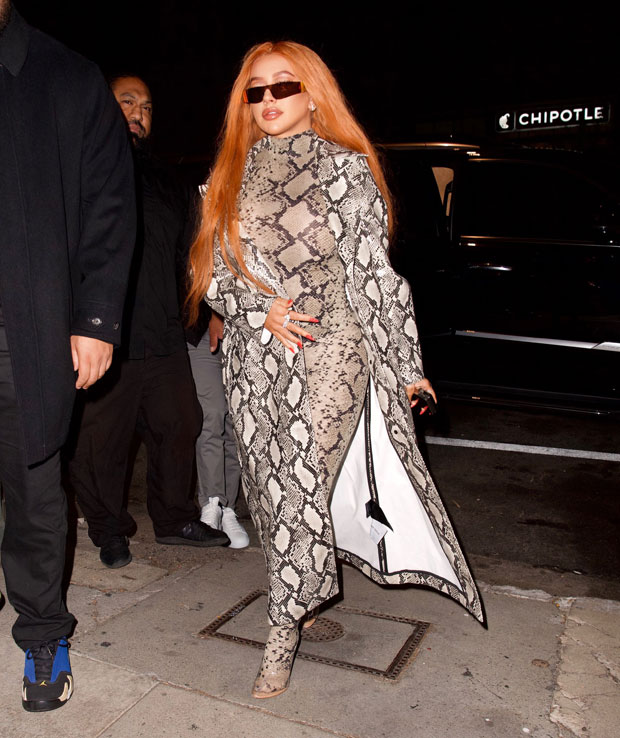 The star recently made waves dropping her first Spanish single “Pa’ Mis Muchachas” in two decades, along with a spicy new music video! The “Genie In A Bottle” singer had some support from fellow latinas Nathy Peluso, Becky G, and Nicki Nicole on the track, who also appeared in the Alexandre Moors directed project. The ladies go undercover as they attempt to take down a shady criminal in the four-minute clip, that includes a sexy dance sequence and plenty of eye catching fashion. Christina, in particular, slayed in a patent leather catsuit to open the video, later rocking a all leather trench coat a she sits upon a throne. 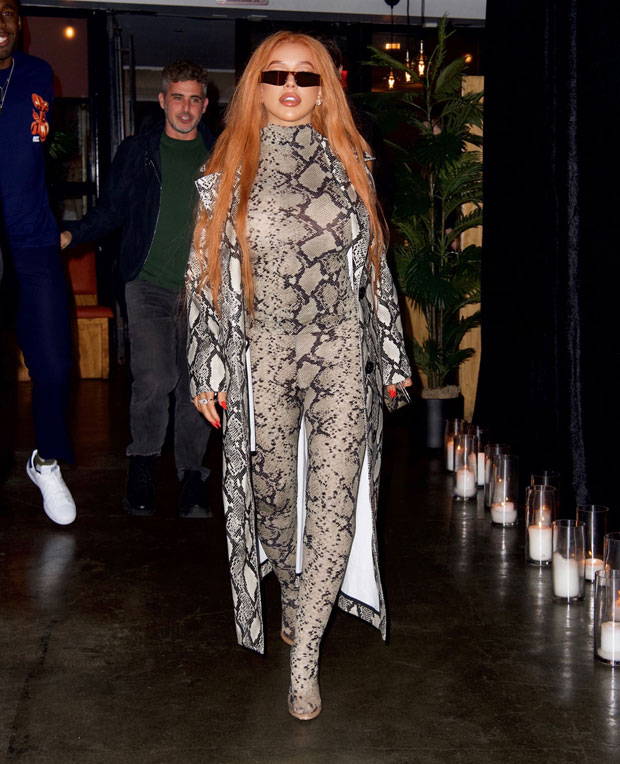 Christina Aguilera Through The Years — Photos

“I am proud to reveal mi primera canción [my first song] from a body of work that lives so closely to my heart,” Christina wrote after releasing the song on social media. “And these beautiful, strong, and talented women are joining forces with me for this first Guaracha,” she added, referencing sub-genre of Latin music that originated in Cuba. Notably, Christina’s father Fausto Xavier Aguilera hails from Ecuador, while her mom Shelly Loraine Kearns is of Welsh, Dutch, German and Irish ancestry.

She also said the song is meant to be an “homage to women” in an interview with Billboard. “In the song we mention that I’m a woman that is strong because I was raised by a woman that was strong and so was she before that,” she explained. “It’s something that gets passed down by generations. I chose Nathy, Becky and Nicki because of the strength they exude.”

Tags: Christina Aguilera
You may also like
Celebrities News