It’s happened so often it’s a cliche – the young pop starlet edges closer to adulthood and leans into a “grown-up” image, often accompanied with a highly sexualised magazine photo shoot. We saw it with Miley Cyrus in Vanity Fair in 2008 and both Britney Spears and Christina Aguilera in Rolling Stone more than two decades ago.

Billie Eilish, the 19-year-old multiple Grammy winner and Gen Z icon, had long seemed to buck this trend. Shooting to fame at just 13, she shrouded her body in baggy clothes for years in an apparent deliberate avoidance of the male gaze.

Now, the singer has had her own “transformation”, posing on the cover of British Vogue in a pin-up look wearing lingerie. Her Instagram post of the cover became the fastest ever to reach a million likes (it’s now clocked about 15 million), and while many have praised her shoot as empowering, others have criticised her for doing a 180 and sexualising herself.

The truth seems to lie somewhere in between these two extremes, in a space that contains multitudes – much like Eilish herself.

Eilish’s baggy aesthetic was often celebrated for promoting body positivity and subverting traditionally sexualised images of teen pop stars – “It kind of gives nobody the opportunity to judge what your body looks like,” she told Vogue Australia in 2019 – but in her new Vogue interview, she reveals that she first started wearing loose clothes because of her insecurities about her body. 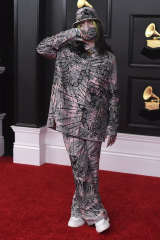 Eilish’s style was an attempt to protect herself, then, while also serving as a big middle finger to the predatory male gaze. But it became its own kind of burden, as she told Vogue: “The more the internet and the world care about somebody that’s doing something they’re not used to, they put it on such a high pedestal that then it’s even worse.”

Whether we realised it or not, the breathless enthusiasm for her covered-up look underscored a weird sense of sexism; reinforcing old-fashioned notions of female modesty and what the “right” kind of girlhood looks like.

Her baggy look also made the cultural hunger for her body more rabid than ever — as was evident last October when a paparazzi shot of Eilish in a simple singlet top and shorts went viral. As always, it was a moment of extremes: creepy comments about her boobs, shaming remarks about her “mom” body, and praise for her “bravery” for deigning to exist in functional clothes.

Each response was problematic in its own way, and reinforced what Eilish had been saying all along: showing her body would open her up to judgement, sexualisation, and damaging projection.

Six months later, appearing in lingerie in Vogue in a photo shoot that was her own idea, she seems to be reclaiming this gaze once again. She’s revealing herself on her own terms, in a way that makes her feel good. And she’s questioning why it felt important to any of us that she hid her body in the first place.

It falls in line with the message of one of her tour films, “Not My Responsibility”, which was released on her YouTube channel in May last year, showing how other people’s opinions are not hers to internalise.

“If I wear what is comfortable, I am not a woman. If I shed layers, I am a slut…If I wear more, who decides what that makes me? What that means? Is my value based only on your perception?”

Billie Eilish cannot escape other people’s opinions about her body and her actions. But she can reject them.

In the Vogue photo shoot’s accompanying interview, Eilish reveals she’s well aware of the contrasts the new images entail, and outlines the criticism she anticipates. Her latest single is about sexual predators who prey on young girls; here she is seemingly sexualising herself. She has been vocal about body positivity; here she is wearing corsets because she “hates” her stomach. She rejects the male gaze; here she is being shot by a male photographer in lingerie for the world to see.

But the images themselves, while sexy, aren’t over-sexualised. A lot of this comes down Eilish’s expression; there’s an aura of boredom there. She’s not inviting you to look at her. She knows you will, and she simply does not care.

In doing this shoot, Eilish is making a statement not just to the people who have sexualised and shamed her, but also to those whose praise is condescending at best and misogynistic at worst.

As she says in the interview, “Showing your body and showing your skin — or not — should not take any respect away from you”.

Get a little more outta life

Start your week with practical tips and expert advice to help you make the most of your personal health, relationships, fitness and nutrition. Sign up to our Live Well newsletter sent every Monday.

Tags: Billie, Eilish, in, lingeri, posed
You may also like
Celebrities News